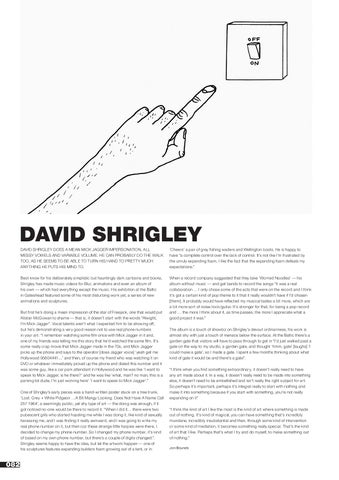 David Shrigley DAVID SHRIGLEY DOES A MEAN MICK JAGGER IMPERSONATION, ALL MESSY VOWELS AND VARIABLE VOLUME. HE CAN PROBABLY DO THE WALK TOO, AS HE SEEMS TO BE ABLE TO TURN HIS HAND TO PRETTY MUCH ANYTHING HE PUTS HIS MIND TO.

‘Cheers’ a pair of grey fishing waders and Wellington boots. He is happy to have “a complete control over the lack of control. It’s not like I’m frustrated by the unruly expanding foam, I like the fact that the expanding foam defeats my expectations.”

Best know for his deliberately simplistic but hauntingly dark cartoons and books, Shrigley has made music videos for Blur, animations and even an album of his own — which had everything except the music. His exhibition at the Baltic in Gateshead featured some of his most disturbing work yet, a series of new animations and sculptures.

When a record company suggested that they take ‘Worried Noodles’ — his album without music — and get bands to record the songs “it was a real collaboration … I only chose some of the acts that were on the record and I think it’s got a certain kind of pop theme to it that it really wouldn’t have if I’d chosen [them]. It probably would have reflected my musical tastes a bit more, which are a bit more sort of noise/rock/guitar. It’s stronger for that, for being a pop record and … the more I think about it, as time passes, the more I appreciate what a good project it was.”

But first he’s doing a mean impression of the star of Freejack, one that would put Alistair McGowan to shame — that is, it doesn’t start with the words “Alwight, I’m Mick Jagger”. Vocal talents aren’t what I expected him to be showing off, but he’s demonstrating a very good reason not to use real phone numbers in your art: “I remember watching some film once with Mick Jagger in it and, one of my friends was telling me this story that he’d watched the same film. It’s some really crap movie that Mick Jagger made in the 70s, and Mick Jagger picks up the phone and says to the operator [does Jagger voice] ‘yeah get me Hollywood 95604441....’ and then, of course my friend who was watching it on DVD or whatever immediately picked up the phone and dialed this number and it was some guy, like a car park attendant in Hollywood and he was like ‘I want to speak to Mick Jagger, is he there?’ and he was like ‘what, man? no man, this is a parking lot dude, I’m just working here’ ‘I want to speak to Mick Jagger’.” One of Shrigley’s early pieces was a hand-written poster stuck on a tree trunk, ‘Lost. Grey + White Pidgeon …A Bit Mangy Looking. Does Not Have A Name Call 257 1964’, a seemingly public, yet shy type of art — the doing was enough, if it got noticed no-one would be there to record it. “When I did it… there were two pubescent girls who started hassling me while I was doing it, like kind of sexually harassing me, and I was finding it really awkward, and I was going to write my real phone number on it, but then coz these strange little harpies were there, I decided to change my phone number. So I changed my phone number, it’s kind of based on my own phone number, but there’s a couple of digits changed.”. Shrigley seems happy to have the idea, but let the artwork happen — one of his sculptures features expanding builders foam growing out of a tent, or in

The album is a touch of showbiz on Shrigley’s devout ordinariness, his work is almost shy with just a touch of menace below the surface. At the Baltic there’s a garden gate that visitors will have to pass through to get in “I’d just walked past a gate on the way to my studio, a garden gate, and thought ‘hmm, gate’ [laughs] ‘I could make a gate’, so I made a gate. I spent a few months thinking about what kind of gate it would be and there’s a gate”. “I think when you find something extraordinary, it doesn’t really need to have any art made about it. In a way, it doesn’t really need to be made into something else, it doesn’t need to be embellished and isn’t really the right subject for art. So perhaps it’s important, perhaps it’s integral really to start with nothing and make it into something because if you start with something, you’re not really expanding on it” “I think the kind of art I like the most is the kind of art where something is made out of nothing. It’s kind of magical, you can have something that’s incredibly mundane, incredibly insubstantial and then, through some kind of intervention or some kind of mediation, it becomes something really special. That’s the kind of art that I like. Perhaps that’s what I try and do myself, to make something out of nothing.” Jon Bounds 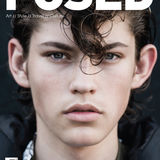