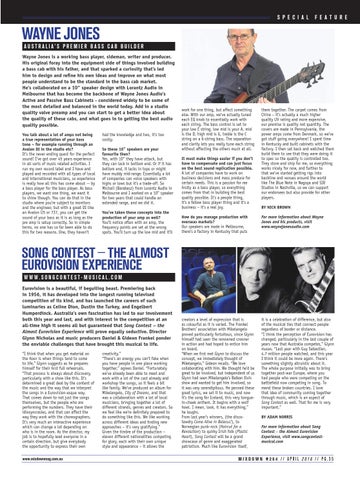 WAYNE JONES AUSTRALIA’S PREMIER BASS CAB BUILDER Wayne Jones is a working bass player, sideman, writer and producer. His original foray into the equipment side of things involved building a bass cab with his father, and that sparked a curiosity that’s led him to design and refine his own ideas and improve on what most people understand to be the standard in the bass cab market. He’s collaborated on a 10” speaker design with Lorantz Audio in Melbourne that has become the backbone of Wayne Jones Audio’s Active and Passive Bass Cabinets - considered widely to be some of the most detailed and balanced in the world today. Add in a studio quality valve preamp and you can start to get a better idea about the quality of these cabs, and what goes in to getting the best audio quality possible. You talk about a lot of amps not being a true representation of your bass tone – for example running through an Avalon DI in the studio etc? It’s the never ending quest for the perfect sound! I’ve got over 45 years experience in all sorts of music related activities. I run my own record label and I have and played and recorded with all types of local and international musicians, so experience is really how all this has come about — by a bass player for the bass player. As bass players, we want one thing, we want it to shine though. You can do that in the studio where you’re subject to monitors and the engineer, but with a great DI like an Avalon U5 or 737, you can get the sound of your bass as it is as long as the pre amp is setup correctly. So in simple terms, no one has so far been able to do this for two reasons. One, they haven’t

had the knowledge and two, it’s too costly. So these 10” speakers are your favourite then? Yes, with 10” they have attack, but they can lack in bottom end. Or if it has bottom end, it lacks in tops or might have muddy mid-range. Essentially a lot of companies can voice speakers with highs or lows but it’s a trade-off. So Michail (Barabasz) from Lorantz Audio in Melbourne and I worked on a 10” speaker for two years that could handle an extended range, and we did it. You’ve taken these concepts into the production of your amp as well? You’ll notice often with an amp, the frequency points are set at the wrong spots. You’ll turn up the low mid and it’ll

work for one thing, but affect something else. With our amp, we’ve actually tuned each EQ knob to essentially work with each string. The bass control is set to your low E string, low mid is your A, mid is the D, high mid is G, treble is the C string on a 6-string bass. The separation and clarity lets you really tune each string without affecting the others much at all. It must make things easier if you don’t have to compensate and can just focus on the best sound replication possible. A lot of companies have to work on business decisions and mass produce for certain needs. This is a passion for me firstly as a bass player, so everything comes from that in building the best quality possible. It’s a people thing, it’s a fellow bass player thing and it’s a business – it’s a real joy.

them together. The carpet comes from China – it’s actually a much higher quality UV rating and more expensive, our premise is quality not quantity. The covers are made in Pennsylvania, the power amps come from Denmark, so we’ve got stuff going everywhere! I spent time in Kentucky and built cabinets with the factory. I then sat back and watched them build them to see that they were doing it to spec so the quality is controlled too. They store and ship for me, so everything works nicely for now, and further to that we’ve started getting rigs into backline and venues around the world like The Blue Note in Nagoya and SIR Studios in Nashville, so we can support our endorsees but also provide for other players. BY NICK BROWN

How do you manage production with overseas markets? Our speakers are made in Melbourne, there’s a factory in Kentucky that puts

For more information about Wayne Jones and his products, visit www.waynejonesaudio.com

creators a level of expression that is as colourful as it is varied. The Frankel Brothers’ association with Mikelangelo proved particularly fortuitous, since Glynn himself had seen the renowned crooner in action and had hoped to entice him on board. “When we first met Glynn to discuss the concept, we immediately thought of Mikelangelo,” Gideon recalls. “We love collaborating with him. We thought he’d be great to be involved, but independent of us Glynn had seen Mikelangelo’s Balkan Elvis show and wanted to get him involved, so it was very serendipitous. He penned these great lyrics, we set it to music, and now it’s the song for Iceland, this very tonguein-cheek anthem. It begins with a wolf howl. I mean, look, it has everything,” he laughs. From last year’s winners, (the discotawdry Come Alive in Belarus!), to Norwegian punk-rock (Haircut for a Revolution) to quirky Irish folk (Plastic Heart), Song Contest will be a grand showcase of genre and exaggerated patriotism. Much like Eurovision itself,

it is a celebration of difference, but also of the musical ties that connect people regardless of border or distance. “I think the perception of Eurovision has changed, particularly in the last couple of years now that Australia competes,” Glynn muses. “Last year with Guy Sebastian, 4.7 million people watched, and this year I think it could be more again. There’s something slightly altruistic about it. The whole purpose initially was to bring together post-war Europe, where you had people who were competing on the battlefield now competing in song. To mend these broken countries. I love that idea of community coming together through music, which is an aspect of Song Contest as well. That for me is very important.”

SONG CONTEST – THE ALMOST EUROVISION EXPERIENCE WWW.SONGCONTEST-MUSICAL.COM Eurovision is a beautiful, if beguiling beast. Premiering back in 1956, it has developed into the longest running televised competition of its kind, and has launched the careers of such luminaries as Celine Dion, Dustin the Turkey, and Engelbert Humperdinck. Australia’s own fascination has led to our involvement both this year and last, and with interest in the competition at an all-time high it seems all but guaranteed that Song Contest – the Almost Eurovision Experience will prove equally seductive. Director Glynn Nicholas and music producers Daniel & Gideon Frankel ponder the enviable challenges that have brought this musical to life. “I think that when you get material on the floor is when things tend to come to life,” Glynn suggests as he prepares himself for their first full rehearsals. “That process is always about discovery, particularly with a show like this. It’s determined a great deal by the content of the music and the way that we interpret the songs in a Eurovision-esque way. That comes down to not just the songs themselves, but the people who are performing the numbers. They have their idiosyncrasies, and that can affect the way they work with the choreographers. It’s very much an interactive experience which can change a lot depending on who is in the room. As the director, my job is to hopefully lead everyone in a certain direction, but give everybody the opportunity to express their own

creativity.” “There’s an energy you can’t fake when you have people in one place working together,” agrees Daniel. “Fortunately we’ve already been able to meet and work with a lot of the cast already and workshop the songs, so it feels a bit like family. We’ve produced an album for Mikelangelo, City of Dreams, and that was a collaboration with a lot of local musicians, bringing together a lot of different strands, genres and creators. So we feel like we’re definitely prepared to do something like this. We like working across different ideas and finding new approaches – it’s very gratifying.” Given the timbre of the production – eleven different nationalities competing for glory, each with their own unique style and appearance – it allows the 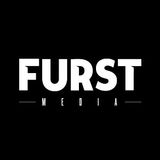