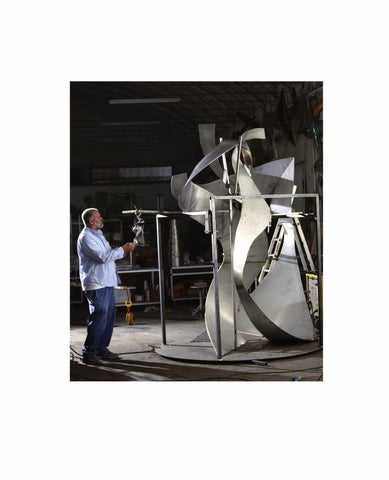 Pablo Atchugarry was born in Montevideo, Uruguay, on August 23, 1954. His father Pedro, an art lover, perceived Pablo’s skills and interest and stimulated him to take up art from childhood. In his early days he expressed himself through painting, and gradually discovered other materials, such as cement, iron and wood. At the end of the 70’s, after staging several exhibitions in Montevideo, Buenos Aires, Porto Alegre and Brasilia, he made several trips to study in Spain, France and Italy, where he organised his first personal exhibition in 1978 in the city of Lecco (Lake Como). His painting work was subsequently exhibited in several cities, such as Milan, Copenhagen, Paris, Coira, Bergamo and Stockholm. In 1979, after experimenting with different materials, he discovered marble as an extraordinary and fascinating material, and created his first sculpture called “La Lumière”, in Carrara. In 1980-81 he continued to travel, and exhibited his pictorial work in Stockholm, Lucerne, Lugano, Munich, Zurich, London, Malmö, Paris and Bogota. In 1982, he continued to work in marble in Carrara and decided to settle in Lecco, Italy, as a result of his sculpture “La Pietà”, executed in a block of 12 tonnes in statuary Carrara marble, which he finished in 1983. In 1987 he held his first individual sculpture exhibition in the Bramantino Crypt in Milan, which was presented by Raffaele de Grada. As of 1989, he also made some monumental pieces which are now part of private and public collections in America and Europe. In 1996 he executed the sculpture “Semilla de la esperanza” [The seed of hope] for the park of the Libertad Building, the seat of the Government of Uruguay. In 1999, the Pablo Atchugarry Museum was founded in Lecco, exhibiting work spanning his whole career, and which also houses all the artist’s bibliographic documentation and work archive. In 2001, the Province of Milan organised a retrospective exhibition of his work “Le infinite evoluzioni del marmo” [The infinite evolutions of marble], in the Isimbardi Palace in Milan. That same year, he sculpted the monument titled the “Obelisco del terzo millennio” [Obelisk of the Third Millennium], a 6-metre high sculpture in Carrara marble for the Italian city of Manzano (Udine), and he was commissioned to make the “Monumento alla Civiltà e Cultura del lavoro Lecchese” [Civilisation and the work ethos of Lecco], a 6-metre high sculpture in Carrara marble that weighs in at thirty tonnes. In 2002, in Carrara, he was honoured with the “Michelangelo” award, in recognition of his career as an artist, and he continued to work on different pieces, including the “Ideali” [Ideals] sculpture, which stands on Princess Grace Avenue in Monaco, created for the occasion of the 50th anniversary of the coronation of Prince Rainier of Monte Carlo. In 2003 he participated in the 50th Venice Biennal with the work “Soñando la paz” [Dreaming of Peace], a sculptural work consisting of eight pieces, five of them in statuary Carrara marble and three in Bardiglio marble from Garfagnana. That same year he sculpted the “Ascención” [Ascension] work for the Franc Daurel Foundation of Barcelona. In 2004 he made the “Energía Vital” [Vital Energy] sculpture in Rosa Portugal marble for the Davidoff Cancer Hospital of the Belinson Centre in Petak Tikva, Israel. In 2005, the Museo National de Bellas Artes of Buenos Aires organised an exhibition of his work. 75

In June 2006, the Groningen Museum and Concert Hall of Bruges, Belgium, organised a major retrospective exhibiting of work from private international collections. The Berardo Collection of Portugal purchased the “Camino Vital” [Vital Path] (483 cm high) piece, carved in 1999 in statuary Carrara marble for the Belén Cultural Centre of Lisbon. In 2007 he created the Pablo Atchugarry Foundation in Manantiales, Uruguay, with the intention of stimulating the arts and creating a meeting point for artists of all disciplines, an ideal nexus between nature and art. In 2007, he also completed the work “Nella luce” [Under the spotlight], 8 metres high, sculpted in a block of 48 tonnes for the Fontana Collection in Italy. Between 2007 and 2008, a retrospective and travelling exhibition of his work was organised in Brazil. The exhibition, titled “Lo spazio plastico della luce” [The plastic space of light], presented by Luca Massimo Barbero, was exhibited in the Banco do Brazil Cultural Centre in Brasilia, the MUBE (Brasilian Sculpture Museum) of São Paulo and the Oscar Niemeyer Museum of Curitiba. In 2008, the National Museum of Visual Arts of Montevideo organised an exhibition of his body of work over the last 15 years. In 2009 he made the sculpture “Luz y Energía de Punta del Este” [Light and Energy of Punta del Este], a 5-metre-high piece in Carrara statue marble for the city of Punta del Este. Between 2009 and 2011 he developed the Pablo Atchugarry Foundation in Manantiales, creating an international sculpture park, new exhibition and didactic spaces for the dissemination and teaching of art, which is visited by thousands of students. In 2011, the Groningen Bruges Museum purchased the 3-metre-high work executed in the course of 1999 in statuary Carrara marble. His work is exhibited at the following museums and public institutions: the National Museum of Visual Arts of Montevideo, Parco Museum of Portofino, Lercaro Museum of Bologna, Collection of the Province of Milan, Palazzo Isimbardi, Collection of the Province of Lecco, the Ticozzi Room, Lecco, Fatebenefratelli Centre of Valmadrera, Groningen Museum in Bruges, etc. His sculptural work has been exhibited in London, New York, Miami, Montevideo, Buenos Aires, Paris, São Paulo, Curitiba, Brasilia, Panama, New Orleans, San Francisco, Madrid, Cologne, Frankfurt, Maastricht, Amsterdam, Bruges, Brussel, Gant, Zurich, Basel, Abu Dhabi, Milan,Venice, Turin, Stockholm, etc. His works are auctioned at Christie’s and Sotheby’s in London, New York, Paris and Amsterdam. His sculptures are part of public and private collections in the United States, England, Mexico, Italy, France, Argentina, Brazil, Portugal, Belgium, Holland, Columbia, Luxembourg, Panama, Chile, Russia, Saudi Arabia, Arab Emirates, Israel, Lebanon,Venezuela, Peru, Germany, Poland, Uruguay, Dominican Republic, Japan, Korea, Principality of Monaco, etc. In November 2011 he had his first solo exhibition in New York held by the Hollis Taggart Gallery. The sculpture Dreaming New York has been exhibited in occasion of the Armory Show in Times Square, March 2012. The Electa - Mondadori publishing house is preparing the artist’s sculpture catalogue, which is scheduled to be distributed by the end of 2012 He is currently living and working in the city of Lecco, Italy, and in Manantiales, Uruguay. Unwitting victims of the modern age must burrow a way back to an almost ancient mindset in order to deal with the sculptures of Pablo Atchug...

Unwitting victims of the modern age must burrow a way back to an almost ancient mindset in order to deal with the sculptures of Pablo Atchug...