The Newsletter of Fundació MONA · Issue 39 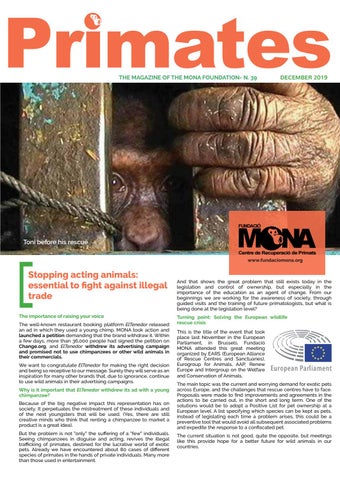 THE MAGAZINE OF THE MONA FOUNDATION- N. 39

Stopping acting animals: essential to ﬁght against illegal trade The importance of raising your voice The well-known restaurant booking platform ElTenedor released an ad in which they used a young chimp. MONA took action and launched a petition demanding that the brand withdraw it. Within a few days, more than 36,000 people had signed the petition on Change.org, and ElTenedor withdrew its advertising campaign and promised not to use chimpanzees or other wild animals in their commercials. We want to congratulate ElTenedor for making the right decision and being so receptive to our message. Surely they will serve as an inspiration for many other brands that, due to ignorance, continue to use wild animals in their advertising campaigns. Why is it important that ElTenedor withdrew its ad with a young chimpanzee? Because of the big negative impact this representation has on society. It perpetuates the mistreatment of these individuals and of the next youngsters that will be used. (Yes, there are still creative minds who think that renting a chimpanzee to market a product is a great idea). But the problem is not &quot;only&quot; the suﬀering of a &quot;few&quot; individuals. Seeing chimpanzees in disguise and acting, revives the illegal traﬃcking of primates, destined for the lucrative world of exotic pets. Already we have encountered about 80 cases of diﬀerent species of primates in the hands of private individuals. Many more than those used in entertainment.

And that shows the great problem that still exists today in the legislation and control of ownership, but especially in the importance of the education as an agent of change. From our beginnings we are working for the awareness of society, through guided visits and the training of future primatologists, but what is being done at the legislation level? Turning point: Solving the European wildlife rescue crisis This is the title of the event that took place last November in the European Parliament, in Brussels. Fundació MONA attended this great meeting organized by EARS (European Alliance of Rescue Centres and Sanctuaries), Eurogroup for Animals, AAP, Renew Europe and Intergroup on the Welfare and Conservation of Animals. The main topic was the current and worrying demand for exotic pets across Europe, and the challenges that rescue centres have to face. Proposals were made to ﬁnd improvements and agreements in the actions to be carried out, in the short and long term. One of the solutions would be to adopt a Positive List for pet ownership at a European level. A list specifying which species can be kept as pets, instead of legislating each time a problem arises, this could be a preventive tool that would avoid all subsequent associated problems and expedite the response to a conﬁscated pet. The current situation is not good, quite the opposite, but meetings like this provide hope for a better future for wild animals in our countries.

New veterinary annex You already know that chimpanzees are very long-lived and that some of MONA&#39;s inhabitants are getting old. Age-related illnesses begin to be the order of the day, including a number of diﬀerent heart problems. If anaesthesia is a risk for an aging animal, imagine when the concerned individual suﬀers from heart problems. Well, to be enable us to examine the chimps without the use of anaesthesia we have designed and built, with the help of our trusted blacksmiths, an annex for veterinary purposes. We are already using it with Bea, who is getting used to the new construction at the moment.

Paternity test and other surprises As you know, we are part of an international study of the chimpanzee genome, led by a team of scientists from the Institute of Evolutionary Biology (CSIC-UPF). The aim is to ﬁnd the countries of origin (in Africa) of the victims of illegal traﬃcking and thus being able to pressure local governments to implement measures to stop this traﬃcking as currently they usually wash their hands in the absence of evidence. When Dr. Marquès and team presented the results, some of them caught us by surprise. The samples taken by the caretakers of each of the chimpanzees were used to determine their subspecies and the hypothetical country of origin. But in addition to the original purpose, the samples were used to verify possible kinship relationships and have uncovered a reality: half of the stories former owners told us or those stated in their oﬃcial papers, are fake! Why? Surely because in the years when there were no id chips, the oﬃcial ID papers transfered from chimpanzee to chimpanzee as they died; or new baby chimps were claimed to belong to parents with legal papers, in order to obtain permits for the undocumented animals. Thus, kinships between individuals we thought were real, have turned out not to be: such as Marco and Charly&#39;s brotherhood, or the paternity between Toni and Nico, which have been genetically ruled out. Even information in the chimps oﬃcial papers (CITES) where it says they were born in one country has been proved to be untrue as the DNA places their origin in another country thousands of kilometers away. In the case of Victor, who was supposed to have been born in Mali, was shown to be a hybrid of two chimpanzee subspecies that do not share the same habitat, meaning he was born in captivity. You can imagine our faces... But also unexpected kinships appeared: Nico, who suddenly has become an orphan, turns out to have a kinship of 3rd grade with Marco, which means, they are cousins or Marco is his great-uncle.

Award for the best family initiative

Following the recent news about the leaking of a video recorded in the facilities of the German laboratory LPT, the debate on the use of animals for research has been rekindled.

After 25 years working on the distribution of culture and leisure, La Vanguardia wanted to present a series of awards that highlighted innovative initiatives in their areas. They deﬁned 13 categories and Fundació MONA, with our Chimpatic visits, had the honor of being selected among so many possible options. And we are very proud to have won the award for the best initiative for families!

In Europe it was legislated in 2013 to ban the use of animals in experimentation for cosmetics, but that does not mean that they are not used for test for other products and for biomedical research. The legislation even includes exceptions and you don’t have to go far to hear about abuse of primates for research. Just 2 hours from our rescue center, there is a monkey farm that supplies laboratories and they have been denounced on more than one occasion for the brutal treatment of their animals. The ADI (Animal Defender International) inﬁltrated and was able to take footage of the brutal handling by the staﬀ and the overcrowding of the macaques. And that is before they are sent to their terrifying ﬁnal destinations. From MONA we leave you these tips to not contribute to this abuse:

7 primate species, one step closer to extinction Only 29% of all primate species are not threatened The IUCN (International Union for Conservation of Nature) updated the data on the Red List of Threatened Species. And it is not good news for 6 primate species in West Africa and one in Peru. The decline in their population has moved them down to “critically endangered”, only one step away from extinction. The reasons: habitat loss and hunting for bushmeat.

*Infography backround photo: Domitian, one of the Silver Spring macaques. Alex Pacheco of PETA – CC BY 3.0

On a brighter side, the mountain gorilla population is increasing, and has moved from Critically Endangered to Endangered thanks to collaborative conservation eﬀorts.

VII Iberian Primatology Conference Empathy, Education and Conservation: Primates in a shared world This year the event took place in Lisbon and this is where our Research team ﬂew, along with some of the students of the Masters in Primatology of Fundació Universitat de Girona and Fundació MONA (http://masterprimatologiaudg.com/). The presentations were very interesting and enriching, showing a good &quot;level of health&quot; of Iberian Primatology. As always, new bonds and future collaborations were created in order to continue learning about our evolutionary family and working for their conservation and well-being. And we came back with a great reward for our work: winning 4 of the 5 awards were handed out: - Best oral communication: Dietmar Crailsheim et al. -Social grooming networks of former pet and entertainment chimpanzees are shaped by previous experiences and alterations of group composition - Best poster communication: Naomi Anderson et al - What can we learn about dominance and reconciliation in chimpanzees? - Special mention for best poster communication: Iria G. Quiroga et al. Rehabilitation and Reintroduction of Saimiri cassiquiarensis in the Tamandua Ecological Reserve (Ecuador) - Prize for the best ﬁeld photography in Primatology: Martí Masip. *The projects that have given rise to these results have received the support of the “La Caixa” (EMCOBA Project), according to the agreement LCF / PR / PR17 / 11120020 and the Generalitat de Catalunya AGAUR (2017 SGR-1040).

Are you into Primatology? Info about weekend courses, postgraduate and masters at:

WE CREATED A WISH-LIST OF MATERIALS WE NEED AT THE SANCTUARY. Enter in amazon.co.uk or amazon.es and search for Fundació MONA Wishlist. You might ﬁnd something you&#39;d like to send to our primates! Or ﬁnd other ways to help at: www.mona-uk.org/help-us

Would you like to be a Solidary Company? Or join us in a CSR activity? Contact us!

Thank you very much!!

Visit us The MONA Foundation was created to put an end to the illegal traﬃcking, exploitation and mistreatment of primates in captivity and to denounce their current risk of extinction. MONA has established near Girona one of the few rescue centres in Europe that provides a home for life to chimpanzees and other rescued primates, where they can live in a natural environment and where we can learn to understand and respect them.

The Newsletter of Fundació MONA · Issue 39

Primates. The magazine of the MONA Foundation 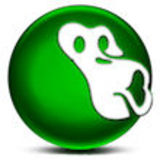