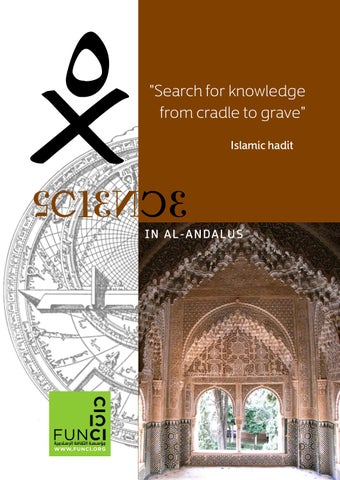 1. Introduction From the 9th to the 14th century, all scientific disciplines experienced a formidable process of development and refinement in Muslim Spain (al-Andalus), partly inherited from the fundamental scientific legacy left by classic Antiquity, as much as from the Eastern world (China, India and Persia), and pre-Hellenic Egypt. Nevertheless, soon Andalusian scientific practices and research acquired a clearly Islamic identity, crucial in the subsequent evolution of scientific methods and ideas. Throughout six centuries, from the House of Wisdom (Bayt al-Hikma) in Baghdad (9th century) - one of the most illustrious wisdom institutions in the Islamic world at that time- to the diverse seats of learning in Cordova, Denia, Toledo, Zaragoza or Granada, islamic scientific knowledge laid the foundations for the European Renaissance with a marked Hispanic-Muslim approach. Astronomy, medicine, alchemy, pharmacology, mathematics, hydraulics and thermo-dynamics, botany, agriculture and architecture, among other disciplines, radiated their influence from Muslim Spain, and contributed to the scientific progress in the rest of the Iberian Peninsula and Europe. In this exhibition, based on rigorous historical research, the visitor is invited to enter deeply into the mindset responsible for the golden scientific era in medieval al-Andalus, fulfilling the Islamic hadith (axiom): "Search for knowledge from cradle to grave". Nevertheless, the scarcity of surviving images and written testimonies chronicling Andalusian times, forces the modern researcher to explore contextual similarities with other contemporaneous societies of the Islamic world and, essentially, to work on hypothesis.