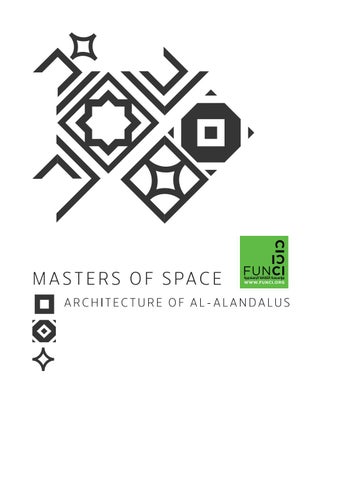 EXHIBITION PROJECT Al-Andalus architecture PRESENTATION • The exhibition intends to offer, in a way accessible to all type of audiences, a broad picture of one of the most exciting chapters in the history of architecture: the al-Andalus period, which encompasses the eight centuries of Muslim governments in the Iberian Peninsula, and to which we owe globally valued monuments such as the Aljama mosque in Córdoba or the Alhambra in Granada.

OBJECTIVES The exhibition aims at achieving four goals, equally ambitious: • To show the architecture of AlAndalus in all its dimensions, both its contributions to the religious and palatine world (to which we owe its most famous monuments) and other aspects, such as urbanism, military architecture or civil engineering. Thus showing the drawing of bridges and roads and the water management and crops as milestones of the medieval Western civilization. • To show this architecture in its constructive truth, going beyond its fascinating appearance. • To consider the preservation of the Andalusian architecture as a potential model for the restoration and appreciation of the Islamic architectural and urban heritage. • To reclaim Andalusian culture as a link, both of the past and also of the future, between Western Europe and the Islamic world.

STRUCTURE The exhibition discourse will be structured in seven chapters, corresponding to the first four periods that comprise the architecture of Al-Andalus, and which will include both the most famous and the less known monuments: • • • •

The three last chapters will develop the subsequent fate of the Andalusian architecture: • Al-Andalus influence in the peninsular Christian kingdom’s architecture • Al-Andalus and Romanticism: the universalization of the Alhambra and other Andalusian monuments, from its academic value to the orientalist esteem • Andalusian architecture in the light of the last researches and discoveries The material displayed will offer a wide conceptual field, so that the objects complement each other: for example, when entering the chapter dedicated to the Nasrid art, the visitor will attend to a virtual tour through the halls of the Alhambra before touching the marble of one of the capitals sculpted in such a way so as to show the sculptural techniques of Granada’s craftsmen. He might also be able to contemplate the fragments of a wall showing successive lawyers, from the brickwork to the plasterwork coatings and the wall paintings.

PARALLEL ACTIVITIES Workshops, led by some of our best specialists and addressed to groups of architecture students and other interested

people. The workshops, limited to one or two weeks (although they could be repeated, based on the demand), will introduce the assistants to the Andalusian construction techniques, going beyond its formal appearance to its structural and constructive truth. These workshops will comprise the following Andalusian architectural aspects, based on their material reality: • Wood: structures and enclosures. The size and compositions of the latticework • Stone: Columns, arches and vaults; arabesques, traceries, fountains and pavements • Plaster: wall decorations and muqarnas vaults • Clay: walls, pavement and plinths. Cut bricks • Paint: polychrome and decorative and figurative motifs • Drawing: composition and geometry of the Andalusian spaces and decorations A series of conferences will be organized with the participation of specialists in the subjects exposed.

Special workshops for children, organized with materials such as clay and colours, as well as with storytellers

that will introduce them through its stories and legends to the fascinating world of AlAndalus.

DESCRIPTION The exhibition should be placed under a covered pavilion, although with some modifications a textile cover protecting it could be designed. The outside will be sober but attractive, with a design mixing weaves and colors that invites you to discover the inside.

There are two spaces, the reception (2) and the projection room (8), which serve both as introduction and recapitulation. The partition wall separating them is a translucent surface which receives the images from the projector: thus, what in the entrance looks like a confusing yet attractive series of shapes, in the projection room is part of a discourse that the content of the rooms, once visited, help to understand. As a transition between the outside and the exhibition, the hall recreates the fascinating space of Toledoâ&#x20AC;&#x2122;s mosque of Bib alMardum. It will constitute a dark space that will make even more eye-catching the moving images projected against the partition wall at the end of the hall, where the ticket and catalogues pickup points ar

The exhibition itself is organized in four rooms, which correspond to some of the historicartistic periods of alAndalus: Umayyad (3), the Taifa kingdoms (4), Almohad (5), and the Nasrid period (6). There is a fifth room (7) which explores the subsequent remnants of the Andalusian art, from the Christian Westernâ&#x20AC;&#x2122;s Middle Age (including some ramifications that can be traced up to France, England and Italy) until today.

In the panels, the description of the monuments will be carried out through a gradual geographical approach, as a zoom: geographical position in the Peninsula, location in the selected cities’ urban fabric (Córdoba, Granada, Toledo…), and finally, the plans, sections, drawings and virtual recreations of the most representative buildings, along with precise and simple descriptions. The interested public will obtain more information thanks to the texts included in the catalogue, which will have to be edited at least in three languages: Arabic, English and Spanish. The mockups will show complex compounds. In all of them, there will be devices that will allow the observer to detail constructive elements or phases through graphic and color effects. The display cabinets will be in front of the wall but attached to it. They will focus the attention on the material and constructive reality of Al-Andalus’ architecture. In them, one will be able to see the different phases of the creation of an Umayyad capital, an arabesque panel, a fresco wall painting, a ceramic or plastic socle, as well as different constructive bonds: lime concrete, stone, brick…

The large size architectural elements will allow to imagine the scale and the spatial impression of the Andalusian monuments. In addition to the hall, which will be seen from the Umayyad room as part of the exhibition discourse, there will be a real scale fragment of the arches of Córdoba’s mosque, a Taifa oratory inspired in the Aljafería of Zaragoza or in Toledo’s Bethlehem chapel, a panel of Amohad wall decorated with sebka, and finally, a Nasrid patio with portico and qubbas (the entrance pavilion and the qubba regia). In every case, this elements will be used to explain the construction techniques, decorative resources and the covering materials, such as the wooden roofs and the muqarnas.

The climax of the exhibition, visible for the public from the exit gallery, will be the education workshop, where practical courses designed for students and the interested public will be taught. After having seen all the rooms, the visitor will be able to see from the exit gallery the activities where the students will be introduced to stone processing, plasterwork, fresco wall painting, interlaced carpentry, the muqarnas, geometrical drawingsâ&#x20AC;Ś This practical work will be complemented with lectures given by specialists, and addressed to the workshop students and to the public in general. The exhibition intends to offer, in a way accessible to all type of audiences, a broad picture of one of the most exciting chapters in the h...

The exhibition intends to offer, in a way accessible to all type of audiences, a broad picture of one of the most exciting chapters in the h...