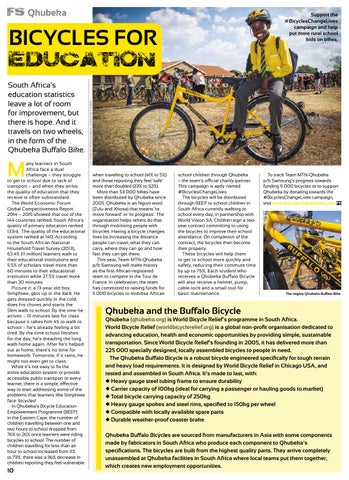 south africa’s education statistics leave a lot of room for improvement, but there is hope. and it travels on two wheels, in the form of the Qhubeka Buffalo Bike.

any learners in south africa face a dual challenge – they struggle to get to school due to lack of transport – and when they arrive, the quality of education that they receive is often substandard. the World economic forum Global Competitiveness report 2014 – 2015 showed that out of the 144 countries ranked, south africa’s quality of primary education ranked 133rd. the quality of the educational system ranked at 140. according to the south african national household travel survey (2013), 63.4% (11 million) learners walk to their educational institutions and 5.5% of scholars travel more than 60 minutes to their educational institution while 27.5% travel more than 30 minutes. picture it: a 13-year old boy, simphiwe, gets up in the dark. he gets dressed quickly in the cold, does his chores and starts the 5km walk to school. by the time he arrives – 15 minutes late for class because it takes him 45 to walk to school – he’s already feeling a bit tired. by the time school finishes for the day, he’s dreading the long walk home again. after he’s helped out at home, there’s no time for homework. tomorrow, if it rains, he might not even get to class. While it’s not easy to fix the entire education system or provide accessible public transport to every learner, there is a simple, effective way to start addressing some of the problems that learners like simphiwe face: bicycles! In Qhubeka’s bicycle education empowerment programme (beep) in the eastern Cape, the number of children travelling between one and two hours to school dropped from 76% to 26% once learners were riding bicycles to school. the number of children travelling for less than an hour to school increased from 11% to 73%; there was a 36% decrease in children reporting they feel vulnerable

all photos from Qhubeka | Donovon thorne

when travelling to school (41% to 5%) and those reporting they feel ‘safe’ more than doubled (23% to 52%). more than 53 000 bikes have been distributed by Qhubeka since 2005. Qhubeka is an nguni word (Zulu and Xhosa) that means ‘to move forward’ or ‘to progress’. the organisation helps others do that through mobilising people with bicycles. having a bicycle changes lives by increasing the distance people can travel, what they can carry, where they can go and how fast they can get there. this year, team mtn-Qhubeka p/b samsung will make history as the first African-registered team to compete in the tour de france. In celebration, the team has committed to raising funds for 5 000 bicycles to mobilise african

school children through Qhubeka – the team’s official charity partner. this campaign is aptly named #bicyclesChangelives. the bicycles will be distributed through beep to school children in south africa currently walking to school every day, in partnership with World vision sa. Children sign a twoyear contract committing to using the bicycles to improve their school attendance. on completion of the contract, the bicycles then become their property. these bicycles will help them to get to school more quickly and safely, reducing their commute time by up to 75%. each student who receives a Qhubeka buffalo bicycle will also receive a helmet, pump, cable-lock and a small tool for basic maintenance.

to track team mtn-Qhubeka p/b samsung’s progress towards funding 5 000 bicycles or to support Qhubeka by donating towards the #bicyclesChangelives campaign, visit www.bicycleschangelives.com.

Qhubeka and the Buffalo Bicycle Qhubeka (qhubeka.org) is World Bicycle Relief’s programme in South Africa. World Bicycle Relief (worldbicyclerelief.org) is a global non-profit organisation dedicated to advancing education, health and economic opportunities by providing simple, sustainable transportation. Since World Bicycle Relief’s founding in 2005, it has delivered more than 225 000 specially designed, locally assembled bicycles to people in need. The Qhubeka Buffalo Bicycle is a robust bicycle engineered specifically for tough terrain and heavy load requirements. It is designed by World Bicycle Relief in Chicago USA, and tested and assembled in South Africa. It’s made to last, with: ◆ Heavy gauge steel tubing frame to ensure durability ◆ Carrier capacity of 100kg (ideal for carrying a passenger or hauling goods to market) ◆ Total bicycle carrying capacity of 250kg ◆ Heavy gauge spokes and steel rims, specified to 150kg per wheel ◆ Compatible with locally available spare parts ◆ Durable weather-proof coaster brake Qhubeka Buffalo Bicycles are sourced from manufacturers in Asia with some components made by fabricators in South Africa who produce each component to Qhubeka’s specifications. The bicycles are built from the highest quality parts. They arrive completely unassembled at Qhubeka facilities in South Africa where local teams put them together, which creates new employment opportunities.

Sus the June/July issue of Full Sus, featuring the Monster Energy Garden Route Project, a story on how Qhubeka's bicycles change lives, a pre-race guide to why you should be doing the Dr Evil Classic and all the regulars. Plus you can win entries to the Fedhealth MTB Challenge and there's the first Full Sus yoga column by Joelle Sleebos to check out. 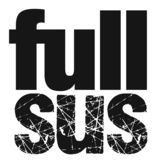