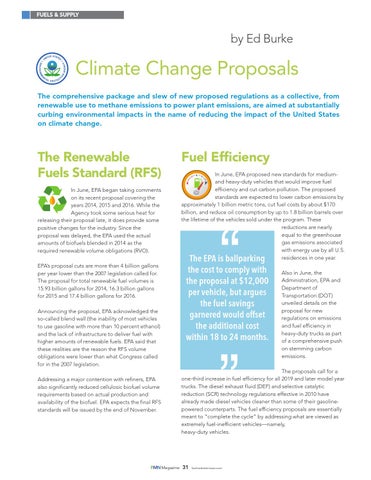 Climate Change Proposals The comprehensive package and slew of new proposed regulations as a collective, from renewable use to methane emissions to power plant emissions, are aimed at substantially curbing environmental impacts in the name of reducing the impact of the United States on climate change.

The Renewable Fuels Standard (RFS) In June, EPA began taking comments on its recent proposal covering the years 2014, 2015 and 2016. While the Agency took some serious heat for releasing their proposal late, it does provide some positive changes for the industry. Since the proposal was delayed, the EPA used the actual amounts of biofuels blended in 2014 as the required renewable volume obligations (RVO). EPA’s proposal cuts are more than 4 billion gallons per year lower than the 2007 legislation called for. The proposal for total renewable fuel volumes is 15.93 billion gallons for 2014, 16.3 billion gallons for 2015 and 17.4 billion gallons for 2016. Announcing the proposal, EPA acknowledged the so-called blend wall (the inability of most vehicles to use gasoline with more than 10 percent ethanol) and the lack of infrastructure to deliver fuel with higher amounts of renewable fuels. EPA said that these realities are the reason the RFS volume obligations were lower than what Congress called for in the 2007 legislation. Addressing a major contention with refiners, EPA also significantly reduced cellulosic biofuel volume requirements based on actual production and availability of the biofuel. EPA expects the final RFS standards will be issued by the end of November.

Fuel Efficiency In June, EPA proposed new standards for mediumand heavy-duty vehicles that would improve fuel efficiency and cut carbon pollution. The proposed standards are expected to lower carbon emissions by approximately 1 billion metric tons, cut fuel costs by about $170 billion, and reduce oil consumption by up to 1.8 billion barrels over the lifetime of the vehicles sold under the program. These reductions are nearly equal to the greenhouse gas emissions associated with energy use by all U.S. residences in one year.

The EPA is ballparking the cost to comply with the proposal at $12,000 per vehicle, but argues the fuel savings garnered would offset the additional cost within 18 to 24 months.

Also in June, the Administration, EPA and Department of Transportation (DOT) unveiled details on the proposal for new regulations on emissions and fuel efficiency in heavy-duty trucks as part of a comprehensive push on stemming carbon emissions.

The proposals call for a one-third increase in fuel efficiency for all 2019 and later model year trucks. The diesel exhaust fluid (DEF) and selective catalytic reduction (SCR) technology regulations effective in 2010 have already made diesel vehicles cleaner than some of their gasolinepowered counterparts. The fuel efficiency proposals are essentially meant to “complete the cycle” by addressing what are viewed as extremely fuel-inefficient vehicles—namely, heavy-duty vehicles. 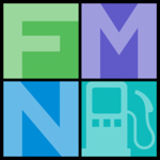