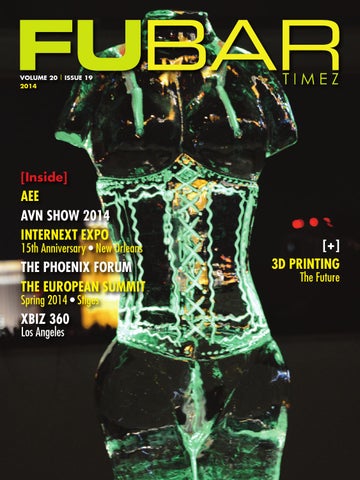 THE PHOENIX FORUM THE EUROPEAN SUMMIT

6................. 3D PRINTING THE FUTURE Submissions via U.S. Mail will not be returned unless requested, and accompanied by an S.A.S.E. Fubar Times reserves the right to revise any accompanied material(s) to fit editorial guidelines. Submission implies the work is original. Those submitting bear the responsibility of any copyright infringement.

The products and services available herein are not to be purchased by minors. The articles and editorials are meant for entertainment purposes only and do not necessarily represent or reflect the opinions of FubarTimes, its aﬃliates and/or subsidiaries. This publisher in now way oﬀers any recommendation, endorsement or guarantees of any kind in regard to any service, product or person advertised or mentioned within. Therefore, Fubar Times and its publishers may not be held liable or responsible, in any way, for any actions ensuing from advertising. For questions or comments on this publication, please contact us at: 551 ne 28th Court, Pompano Beach, FL 33064.

Copyright © 2014 No part of this publication may be reproduced with the express written permission of its publisher(s). The publisher(s) reserve the right to refuse any advertisement or submission for any reason, including, but not limited to, content or design, with no further responsibility beyond a refund of any payments made. The publishers assume no responsibility for errors and/or omissions, or inability to publish due to mistake, or any other reason caused or suﬀered by themselves or their sub-contractors. Such an occurrence will not constitute a breach of any contract and the publisher will be liable for only the price of the ad space and may, at their option, run a“make good”ad of the same size in a subsequent issue. No right to discount or credit will be given.

The advertiser is solely responsible for ad content and photos, and/orartwork submitted for their advertisement and shall indemnify and hold harmless the publisher from and against any legal actions resulting from statements, photos or artwork run in their ad due to copyright or trademark infringement, lack of proper releases, slander, libel, unfair trade practices, etc. The advertiser also assumes and takes full responsibility for keeping all records as to the age and identity of all models in submitted photos, as required by law, and providing that all models are 18 years of age or older.

THE ADULT INDUSTRY ONLINE has always been as much about technology as it was about porn, perhaps even more so when one considers the way a long string of innovations from this industry eventually affected so many others. Hosting, billing, design, browser technologies, search, data storage and just about every other digital area of development have already been shaped to fit the needs of adult entertainment consumers. Now some forward thinking entrepreneurs are applying the same kind of thinking to tangible technologies and physical goods. Will you still be stuck in the past while they are 3D printing the future?

The consumer side of the equation is also quickly becoming more crowded as new manufacturers are moving forward with prototypes that would bring the entry price point down substantially. Makerbot was undeniably the first market-setter on the consumer side and they continue to offer very high quality devices that range in price from a couple thousand dollars for an older model to $6,499 for the newer and larger Replicator Z18. Most importantly, they also now sell the Makerbot Digitizer for $799, allowing even software novices to quickly scan nearly any small object with the touch of a button and automatically save a reusable schematic to print copies of it. Obviously a 3D printer can not printing complex multi-piece objects or mechanical parts of a complete system, but it can print each piece of nearly any object for assembly.

Now, money is flowing freely and the size of the market is becoming noticeable to many early adopters looking to cash in on the convenience of crafting consumer goods at home with a simple 3D printer setup. According to Gartner’s most recent figures, published in October of 2013, the technique allows for rapid prototyping as well as the creation of objects that traditional injection molds cannot, and is driving a nascent but fastgrowing market estimated to be worth $669 million in 2014. Gartner has also said that shipments will increase further in

2014, growing 75 percent to 98,065 units, followed by a near doubling of unit shipments in 2015.” http://www.gartner.com/newsroom/id/2600115 When evaluating the timing of any new venture it is always helpful to take note of the actions larger players are putting into any particular market sector. In the 3D printing arena Maryland is taking large steps to lead the way and Kickstarter is allowing small individual investors to push ideas forward as well. “We have a very real opportunity to build Maryland into a hub for 3D printing and additive manufacturing, increasing Maryland’s competitiveness, bottom line, and driving economic growth,” said Jan Baum, Executive Director of 3D Maryland, a new program pushing awareness of 3D-printing technologies when interviewed by Fortune. When Baum, who is also a full professor at Towson University, was among the industry representatives invited by the House Committee on Small Business in March to testify on Capitol Hill about the economic benefits

of 3D printing, she told Congress that 3D printing “will alter how we compete in an increasingly global marketplace” by giving businesses a more efficient way to test out new technologies before scaling them up.“ http://fortune.com/2014/06/24/maryland-3d-printing-hub/

The basic concept of 3D printing is not particularly new. Manufacturers have used million dollar machines for many years and complicated CAD drawing software to handle everything from injection molding the automotive industry to rapid replication of consumer toys and electronics. However the barrier to entry was always high due to an expensive machine price and steep learning curve. That often prevented manufacturers from quickly or affordably being able to create mock-ups and samples for clients. The need for a faster and less expensive solution spawned the first simple 3D printers that could be considered for home use, and that market has continued to grow rapidly in parallel with the commercial needs of heavy industry.

That means for only a few thousand dollars, anyone can scan and print nearly any small household object from a figurine to a fork in minutes. Now the machine price is being pressured downward quickly. Close to $3.5 million has been pledged on Kickstarter to The Micro. A week after their funding campaign was announced, M3D, the two-man company responsible for designing the new printer and its software, raised more than $2 million in pledges by promoting their device as an easy-to-use 3D printer that will cost only a few hundred dollars. The Makerbot device and all known competitors work with prepackaged plastic filament that ranges in price from about $30 per kilogram up to $200 per kilogram depending on the color, type, quantity and quality of the material you seek. That one time use material continues to be the major factor holding back the entire consumer market. While devices are becoming more affordable each day, the material itself has not seen similar price drops and nobody has created a way to recycle objects back into fresh new filament for creating something new with the same 3D equipment.

3D PRINTING | THE FUTURE The potential for printing sex toys is obvious but they would all be limited to hard plastic at the consumer 3D printing level presently. However, the possibility of using other materials is definitely looming on the horizon. Other industries are already bringing in materials ranging from wood and concrete to ceramics and even human skin.

In 2013 Cornell reported their own University bioengineers were able to 3D print a human ear that looks and feels like flesh while providing nearly the same level of audio performance as a “normal” human ear and in 2014 CBS News did a feature story about a virtual prototype of a full scale construction device that is intended to create an entire 2,500 square foot home in less than 20 hours by printing it with concrete, plastic piping and all the additional pieces necessary for assembly. Called “contour crafting” by inventor, Behrokh Khoshnevis, a professor at the University of Southern California would be utilized primarily for creating emergency shelter in areas hit by natural disasters. As municipalities move to create business nurturing tax incentives and regulation standards, large industrial sectors and delicate scientific research are creating a commercial tipping-point that may soon allow athome 3D printing to be done at very low costs in a variety of materials. “The one real danger of getting into the market now” said a successful company owner who asked not to be identified “is that physical goods may soon face the same piracy problems that porn is already facing. Until now you had to buy a chair to own one, soon you may be able to just download the schematic of that exact chair on a file locker site and use the cheap raw materials to print an exact copy of it without paying anyone who had anything to do with creating the original. 3D printing is very exciting, but it isn’t the utopian answer some outsiders make it seem to be... that answer would be real protection of intellectual property, and unless we can print some newer politicians with bigger brains, that isn’t about to happen any time soon.”