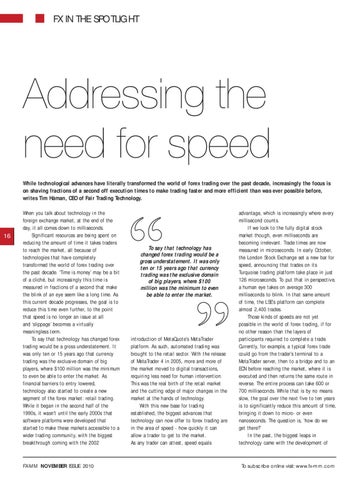 FX IN THE SPOTLIGHT

Addressing the need for speed While technological advances have literally transformed the world of forex trading over the past decade, increasingly the focus is on shaving fractions of a second off execution times to make trading faster and more efficient than was ever possible before, writes Tim Håman, CEO of Fair Trading Technology.

When you talk about technology in the foreign exchange market, at the end of the day, it all comes down to milliseconds. Significant resources are being spent on reducing the amount of time it takes traders to reach the market, all because of technologies that have completely transformed the world of forex trading over the past decade. ‘Time is money’ may be a bit of a cliché, but increasingly this time is measured in fractions of a second that make the blink of an eye seem like a long time. As this current decade progresses, the goal is to reduce this time even further, to the point that speed is no longer an issue at all and ‘slippage’ becomes a virtually meaningless term. To say that technology has changed forex trading would be a gross understatement. It was only ten or 15 years ago that currency trading was the exclusive domain of big players, where $100 million was the minimum to even be able to enter the market. As financial barriers to entry lowered, technology also started to create a new segment of the forex market: retail trading. While it began in the second half of the 1990s, it wasn't until the early 2000s that software platforms were developed that started to make these markets accessible to a wider trading community, with the biggest breakthrough coming with the 2002

To say that technology has changed forex trading would be a gross understatement. It was only ten or 15 years ago that currency trading was the exclusive domain of big players, where $100 million was the minimum to even be able to enter the market.

introduction of MetaQuote's MetaTrader platform. As such, automated trading was brought to the retail sector. With the release of MetaTrader 4 in 2005, more and more of the market moved to digital transactions, requiring less need for human intervention. This was the real birth of the retail market and the cutting edge of major changes in the market at the hands of technology. With this new base for trading established, the biggest advances that technology can now offer to forex trading are in the area of speed - how quickly it can allow a trader to get to the market. As any trader can attest, speed equals

advantage, which is increasingly where every millisecond counts. If we look to the fully digital stock market though, even milliseconds are becoming irrelevant. Trade times are now measured in microseconds. In early October, the London Stock Exchange set a new bar for speed, announcing that trades on its Turquoise trading platform take place in just 126 microseconds. To put that in perspective, a human eye takes on average 300 milliseconds to blink. In that same amount of time, the LSE's platform can complete almost 2,400 trades. Those kinds of speeds are not yet possible in the world of forex trading, if for no other reason than the layers of participants required to complete a trade. Currently, for example, a typical forex trade could go from the trader's terminal to a MetaTrader server, then to a bridge and to an ECN before reaching the market, where it is executed and then returns the same route in reverse. The entire process can take 600 or 700 milliseconds. While that is by no means slow, the goal over the next five to ten years is to significantly reduce this amount of time, bringing it down to micro- or even nanoseconds. The question is, ‘how do we get there?’ In the past, the biggest leaps in technology came with the development of 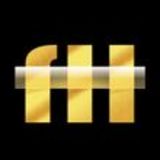 While technological advances have literally transformed the world of forex trading over the past decade, increasingly the focus is on shavin...

While technological advances have literally transformed the world of forex trading over the past decade, increasingly the focus is on shavin...