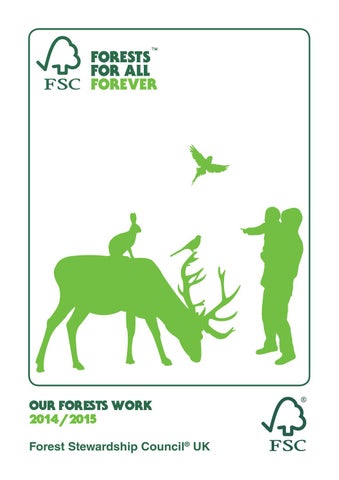 Forests For All Forever

The Forest Stewardship Council速 (FSC速) is an international membership association. FSC United Kingdom is a registered charity in England and Wales under the name Ephesea UK.

FSC UK is one of over 40 national offices. It sets responsible forest management certification standards for the UK, promotes the FSC chain of custody certification system, issues trademark licenses and provides a training and information service.

WELCOME As FSC UK reaches its 20th Anniversary, this review provides an opportunity to look back at the charityâ&amp;#x20AC;&amp;#x2122;s achievements over the past two decades (see timeline on pages 10-11), as well as the highlights of 2014-15. I feel honoured to have been appointed Executive Director at such a point in its history, and very grateful to those that have worked so hard to make the organisation what it is today. Hannah Scrase certainly showed initiative and vision in establishing FSC UK as the first national office back in 1995 and, fortunately, she was not alone in recognising the role that the UK could play in promoting responsible forestry. The success of FSC UK is down to the commitment of staff, trustees, certification bodies, NGOs, the forest owners, manufacturers, retailers and numerous individuals. Thank you! As Executive Director for the reporting period, mention must be made of Charles Thwaites MBE. After over eight years at the helm of FSC UK, Charles retired in March 2015. Perhaps his greatest legacy is the improved financial stability of the charity, enabling us to focus on delivering our charitable aims. We wish Charles a very happy retirement. Of course, as we head into the next 20 years, we face many challenges

but we can also take advantage of many opportunities. FSCâ&amp;#x20AC;&amp;#x2122;s new branding (see pages 14-15 and cover) demonstrates a marked shift in our global approach to engaging consumers and we hope not only to increase recognition of the logo in the UK but also create an emotional connection, driving the market for FSC certified material. The revision of key standards provides a chance to simplify and streamline our requirements whilst retaining the necessary rigour to maintain the integrity and credibility of the system. With over 2,300 certificate holders and a strong market, FSC UK has a vital role to play in promoting and supporting FSC and, as we head into the next phase of our existence, we will continue to strive to meet our charitable aims and, intrinsically linked to this, the needs of our varied stakeholders.

FSC certified forests in the UK:

FSC Chain of Custody in the UK

FSC Trademark Licenses in the UK

Figures correct as of April 2015

The General Assembly 2014 marked the 20th anniversary of FSC’s continuous efforts to find solutions that benefit people and forests worldwide. It brought together FSC members and stakeholders from around the world, to participate in a unique and democratic forum. It was also an opportunity to celebrate two decades of successfully promoting responsible forest management. 19 motions were passed, including: Motion 11: Review of the FSC certification system to adapt forest certification to small forest holders throughout the world

FSC Friday 2014 was celebrated by 30 countries around the world. This is the highest number of countries taking part in FSC Friday and is a step up from 27 in 2013. This year we also ran a Thunderclap. This is a programme that allows people and organisations to sign up their social media accounts to the site, which then sends out the same message simultaneously from the accounts that have signed up. The total social reach was 168,671 people. We encouraged the use of

the hashtag #FSCFriday in the run up to and on the day itself – analysis of this hashtag shows that more than 1.2 million around the world saw information about FSC Friday via social media. Photograph: © Be Modern

Once again the supermarket encouraged shoppers to reccyle their old Christmas cards and wrap in store in speacially FSC branded recycling bins. FSC UK was selected as Sainsbury’s charity partner. for both recyling initiatives and received a donation of more than £12,000.

Stella McCartney reinforced her commitment to sustainability by partnering with Livia Firth’s Eco-Age for the launch of the 2014 London Stella McCartney Green Carpet Collection at London Fashion Week. The exclusive event, held on 14 September, was the hottest ticket in town, hosted by Stella McCartney, Livia Firth, Creative Director of EcoAge and wife of actor Colin Firth, Anna Wintour, Editor in chief of American Vogue and Natalie Massenet, Founder &amp; Executive Chairman of Net-a-Porter. In support of FSC’s mission, a forest room was created at the event from trees, shrubbery, grasses and wood stumps from Pinewood studios’ previous and future film productions. The bark ground covering, donated by Melcourt Industries, wooden gate, donated by Duncombe Sawmill and engraved plaque, made by Signs Workshop were all FSC certified.

CONSUMER SURVEY 2015 Q. What do you think this logo means?

correctly, identifying that it meant environmentally-friendly, or was related to conservation, trees or forestry.

On product On displays in On the On the In a catalogue On the FSCâ&amp;#x20AC;&amp;#x2122;s packaging the shops website of the website of the featuring the own where the manufacturer retailer products website(s) products are and/ or sold guidance materials

All figures are from YouGov Plc. Total sample size was 2,080 adults. Fieldwork was undertaken between 30th - 31st March 2015. The survey was carried out online. The figures have been weighted and are representative of all UK adults (aged 18+).

FORESTS FOR ALL FOREVER In the past 20 years, FSC has become a well-trusted and established brand in sectors and markets around the world. With our new branding we plan to extend our reach by targeting consumers directly. “The success of FSC has always depended on consumer awareness and demand for FSC certified products. We have relied on our partners and certificate holders to spread the message of FSC on our behalf, and their success has been remarkable. But, we have also listened to their calls for more effective tools and materials that could inspire their customers to choose FSC – an identity that would connect with consumers and be memorable in the retail space. We believe the new branding and

marketing toolkit will help them do this,” said Kim Carstensen, Director General of FSC. The new strapline - Forests For All Forever - reaffirms the FSC vision of saving the world’s forests for future generations, while the visual identity, which includes the animals and people who live and interact in forests, reinforces the all-encompassing approach FSC takes to sustainable forest management. “Forests are so much more than trees and timber. Our Principles and Criteria have always reflected our determination to protect forests and their inhabitants. Now, our commitment will also be expressed in our visual identity, and provide a clearer message to consumers of what it means when they buy an FSC certified product.” Kim Carstensen The new branding was developed based on a marketing survey that reached 9,000 participants from 11 different countries in 2013. The online toolkit containing the new branding assets is available to all certificate and licence holders. FSC UK launched the new branding at a stakeholder event in November 2014. More than 50 delegates attended and 87% of those surveyed found the event to be very or somewhat useful.

FINANCE Income Over the 2014/15 financial year income exceeded expenditure. We began the year with an opening balance of £241,409 and ended with a carry forward (including the reserves fund) of £400,884. From our total annual income of £442,297, approximately 6% was received in the form of grants. Membership revenue continues to increase, providing £37,137 of income during the reporting period. However, the most significant increase was in the income received under the Principle Cooperation, Service and Licence Agreement. This is currently calculated on a formula based on the Annual Accreditation Fee (AAF) charged to certified companies in the UK but is subject to change from 2016 onwards.

The increased income from AAF comes with additional delivery expectations and it is anticipated that expenditure will rise as the charity seeks to meet these expectations. FSC UK would like to thank all those who have supported our work over the last financial year, and indeed the past 20 years. Special thanks this year go to: AkzoNobel Cecil Pilkington Charitable Trust WWF UK

Expenditure Expenditure was higher at £282,822 this year compared with last but such an increase was predicted due to the clear need to recruit more staff in order to meet the charity’s increased commitments. We anticipate that staff costs, and overall expenditure will continue to rise during 2015/16 as we seek to meet the needs of certificate holders, raise consumer awareness and target new sectors to drive demand for FSC and address the challenges that come with continued growth.

fixed assets held by the charity should be equivalent to 3 months’ of expenditure and that a reserve fund should be established to meet the working capital requirements of the charity. Forecast expenditure for 2015/16 is approximately £354,000, giving a target of £88,500 held in reserves. At the end of the reporting period reserves had reached £89,500. Assuming no currently unforeseen need to draw on reserves, and no further increase in expenditure, FSC UK is now in a position of having met the target set out in the current Reserves Policy. However, it may be appropriate for the charity to review the policy and consider holding reserves equivalent to 6 months’ expenditure. Advisory Service