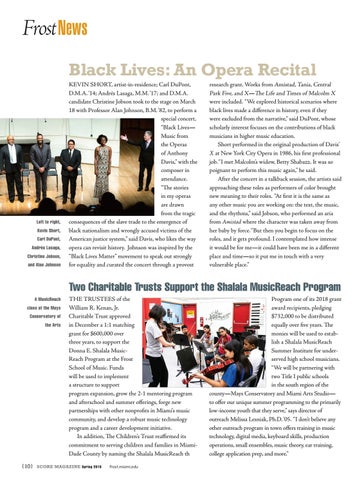 KEVIN SHORT, artist-in-residence; Carl DuPont, D.M.A. ’14; Andrés Lasaga, M.M. ’17; and D.M.A. candidate Christine Jobson took to the stage on March 18 with Professor Alan Johnson, B.M. ’82, to perform a special concert, “Black Lives— Music from the Operas of Anthony Davis,” with the composer in attendance. “The stories in my operas are drawn from the tragic consequences of the slave trade to the emergence of black nationalism and wrongly accused victims of the American justice system,” said Davis, who likes the way opera can revisit history. Johnson was inspired by the “Black Lives Matter” movement to speak out strongly for equality and curated the concert through a provost

research grant. Works from Amistad, Tania, Central Park Five, and X—The Life and Times of Malcolm X were included. “We explored historical scenarios where black lives made a difference in history, even if they were excluded from the narrative,” said DuPont, whose scholarly interest focuses on the contributions of black musicians in higher music education. Short performed in the original production of Davis’ X at New York City Opera in 1986, his first professional job. “I met Malcolm’s widow, Betty Shabazz. It was so poignant to perform this music again,” he said. After the concert in a talkback session, the artists said approaching these roles as performers of color brought new meaning to their roles. “At first it is the same as any other music you are working on: the text, the music, and the rhythms,” said Jobson, who performed an aria from Amistad where the character was taken away from her baby by force. “But then you begin to focus on the roles, and it gets profound. I contemplated how intense it would be for me—it could have been me in a different place and time—so it put me in touch with a very vulnerable place.”

THE TRUSTEES of the William R. Kenan, Jr. Charitable Trust approved in December a 1:1 matching grant for $600,000 over three years, to support the Donna E. Shalala MusicReach Program at the Frost School of Music. Funds will be used to implement a structure to support program expansion, grow the 2-1 mentoring program and afterschool and summer offerings, forge new partnerships with other nonprofits in Miami’s music community, and develop a robust music technology program and a career development initiative. In addition, The Children’s Trust reaffirmed its commitment to serving children and families in MiamiDade County by naming the Shalala MusicReach th

Program one of its 2018 grant award recipients, pledging $732,000 to be distributed equally over five years. The monies will be used to establish a Shalala MusicReach Summer Institute for underserved high school musicians. “We will be partnering with two Title I public schools in the south region of the county—Mays Conservatory and Miami Arts Studio— to offer our unique summer programming to the primarily low-income youth that they serve,” says director of outreach Melissa Lesniak, Ph.D. ’05. “I don’t believe any other outreach program in town offers training in music technology, digital media, keyboard skills, production operations, small ensembles, music theory, ear training, college application prep, and more.”