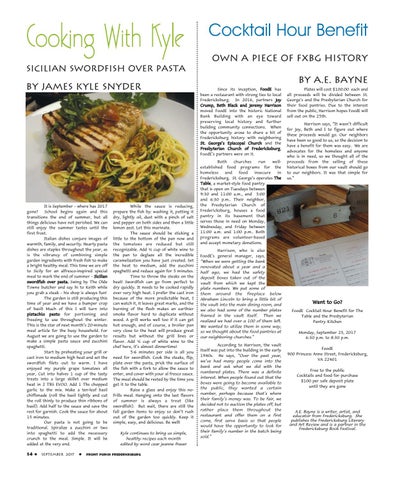 Own a piece of fxbg history

It is September – where has 2017 gone? School begins again and this transitions the end of summer, but all things delicious have not perished. We can still enjoy the summer tastes until the first frost. Italian dishes conjure images of warmth, family, and security. Hearty pasta dishes are staples throughout the year, as is the vibrancy of combining simple garden ingredients with fresh fish to make a bright healthy meal. This time we are off to Sicily for an alfresco-inspired special meal to mark the end of summer – Sicilian swordfish over pasta. Swing by The Olde Towne butcher and say hi to Keith while you grab a steak – his shop is always fun! The garden is still producing this time of year and we have a bumper crop of basil! Much of this I will turn into pistachio pesto for portioning and freezing to use throughout the winter. This is the star of next month’s 20-minute meal article for the busy household. For August we are going to use the garden to make a simple pasta sauce and zucchini spaghetti. Start by preheating your grill or cast iron to medium high heat and set the swordfish filets out to warm. I have enjoyed my purple grape tomatoes all year, Cut into halves 1 cup of the tasty treats into a large skillet over medium heat in 2 TBS EVOO. Add 1 Tbs chopped garlic to the mix. Make a ten-leaf basil chiffonade (roll the basil tightly and cut the roll thinly to produce thin ribbons of basil). Add half to the sauce and save the rest for garnish. Cook the sauce for about 15 minutes. Our pasta is not going to be traditional. Spiralize a zucchini or two into spaghetti to add the necessary crunch to the meal. Simple. It will be added at the very end.

While the sauce is reducing, prepare the fish by: washing it, patting it dry, lightly oil, dust with a pinch of salt and pepper on both sides and then a little lemon zest. Let this marinate. The sauce should be sticking a little to the bottom of the pan now and the tomatoes are reduced but still recognizable. Add ½ cup of white wine to the pan to deglaze all the incredible caramelization you have just created. Set the heat to medium, add the zucchini spaghetti and reduce again for 5 minutes. Time to throw the steaks on the heat! Swordfish can go from perfect to dry quickly. It needs to be cooked rapidly over very high heat. I prefer the cast iron because of the more predictable heat, I can watch it, it leaves great marks, and the burning of the flesh makes an earthier smoke flavor hard to duplicate without wood. A grill works well too if it can get hot enough, and of course, a broiler pan very close to the heat will produce great results but without the grill lines or flavor. Add ½ cup of white wine to the chef here, it’s almost dinnertime! 5-6 minutes per side is all you need for swordfish. Cook the steaks, flip, plate over the pasta, prick the surface of the fish with a fork to allow the sauce to enter, and cover with your al fresco sauce. The meal should be rested by the time you get it to the table. Raise a glass and enjoy this nofrills meal. Hanging onto the last flavors of summer is always a treat (like swordfish). But wait, there are still the fall garden items to enjoy so don’t rush out of the garden too quickly. Keep it simple, easy, and delicious. Be well! Kyle continues to bring us simple, healthy recipes each month edited by word czar jeanne fraser

By a.e. bayne Since its inception, FoodE has been a restaurant with strong ties to local Fredericksburg. In 2016, partners Joy Crump, Beth Black and Jeremy Harrison moved FoodE into the historic National Bank Building with an eye toward preserving local history and further building community connections. When the opportunity arose to share a bit of Fredericksburg history with neighboring St. George’s Episcopal Church and the Presbyterian Church of Fredericksburg, FoodE’s partners were on it. Both churches run wellestablished food programs for the homeless and food insecure in Fredericksburg. St. George’s operates The Table, a market-style food pantry that is open on Tuesdays between 9:30 and 11:00 a.m., and 5:00 and 6:30 p.m.. Their neighbor, the Presbyterian Church of Fredericksburg, houses a food pantry in its basement that serves those in need on Monday, Wednesday, and Friday between 11:00 a.m. and 1:00 p.m.. Both programs are volunteer-based and accept monetary donations. Harrison, who is also FoodE's general manager, says, “When we were getting the bank renovated about a year and a half ago, we had the safety deposit boxes taken out of the vault from which we kept the plate numbers. We put some of them around the fireplace below Abraham Lincoln to bring a little bit of the vault into the main dining room, and we also had some of the number plates framed in the vault itself. Then we realized we had over a 100 of them left. We wanted to utilize them in some way, so we thought about the food pantries at our neighboring churches.” According to Harrison, the vault itself was put into the building in the early 1940s. He says, “Over the past year, we’ve had many people come into the bank and ask what we did with the numbered plates. There was a definite interest. When people found out that the boxes were going to become available to the public, they wanted a certain number, perhaps because that’s where their family’s money was. To be fair, we decided not to auction the plates off, but rather place them throughout the restaurant and offer them on a first come, first serve basis so that people would have the opportunity to look for their family’s number in the batch being sold.”

Plates will cost $100.00 each and all proceeds will be divided between St. George’s and the Presbyterian Church for their food pantries. Due to the interest from the public, Harrison hopes FoodE will sell out on the 25th. Harrison says, “It wasn’t difficult for Joy, Beth and I to figure out where these proceeds would go. Our neighbors have been so good to us, so the decision to have a benefit for them was easy. We are advocates for the homeless and anyone who is in need, so we thought all of the proceeds from the selling of these historical boxes from our vault should go to our neighbors. It was that simple for us.”

C L THE HAPPY M The Only Thing We “Overlook” is the Rappahannock! Want to Go? FoodE Cocktail Hour Benefit for The Table and the Presbyterian Pantry Kitchen Monday, September 25, 2017 6:30 p.m. to 8:30 p.m.

FoodE 900 Princess Anne Street, Fredericksburg, VA 22401 Free to the public Cocktails and food for purchase $100 per safe deposit plate until they are gone

Call it Sister Act, or more appropriately, All in the Family. Whatever you want to call it, Agora Downtown Coffee Shop at 520 Caroline Street is a coffee shop that carries a distinct atmosphere that sets it aside. Located in a building that was once a residence and is registered as a historic landmark, Agora welcomes customers to a warm, comfortable interior where the commuter can come in and grab a cup of joe for the road, or, for those who have the time to linger, there are several rooms set up so customers have a choice of a small meeting place or a more solitary setting to enjoy the many varieties of coffee and home made items offered. Agora is a small business with a big vision, developed from the pipe dreams of two sisters, MJ Stone and Andi Stone Chitters. Interestingly enough, both sisters will tell of how they did not get along to well growing up. Their relationship jelled in college as they began working on fulfilling both of their dreams. MJ, the older by two years, has an undergraduate degree in art and an MS in business and has longed dreamed of owning a coffee shop. Andi has a bachelor's degree in Food Science and has always wanted to open a bakery. At first they thought of having two businesses side by side, but merged their visions into one. While both were finishing their respective educations, they got together and hammered out a business plan which included the participation of the entire family. Their mother handles the financial end of things and their father is the maintenance man (and very busy they reported). Much of the charm of Agora rests in how they have preserved the residential persona of the building. Built in 1787, it has gone through several phases. In the 1800s, it was a blacksmith shop. The floors are original, with burn marks showing where the smithy practiced his trade. Around the interior are hanging art pieces in addition to shelves of books by local authors, all of which are for sale. Coming from a family of coffee drinkers, both sisters enjoy experimenting with different types of beverages, from non-coffee drinks to a variety of chais, and liquor based drinks. With a wide target market, many of the types of coffee and foods come from customers suggestions. MJ stated it was one of the personal touches they utilize in their marketing. "Customers get excited when they see a suggestion they made actually appear on the menu," said MJ. The use of liquor in some of their menu has been a unique concept for Agora. The Black Mamba Mocha, a dark chocolate mocha with Bowman's Caramel Creme Liquor, or The Naughty Chai, a chai

latte with Black Tattoo Rum, are just two of the many and varied liquor drinks offered. There are others that are more seasonal, such as The Sleigh Ride, which is a white chocolate mocha with Black Tattoo Rum, topped with whipped creme and homemade espresso syrup. In addition to coffee and tea drinks, Andi provides baked goods and sandwiches made fresh every morning. Macaroons are the favorites of many, and a blackboard gives customers an opportunity to suggest their favorite variety. In order to meet the need of the commuters, containers of different flavors of dry oatmeal are offered. Hot water can be added at the time of purchase, or it can be carried to work and hot water added there. Andi stated this is a popular item with a cup of coffee as a breakfast for the customer on the run in the morning. The variety of foods go from sweets to vegan. Chocolate chip or oatmeal cookies are right beside the Garden Sandwich, which is a refreshing combination of hummus, cucumber slices, mushrooms, spinach and artichoke hears, all on organic wheat bread. As their business has grown, so has the number of staff. Originally, with everything dependent on it being solely a family operation, MJ and Andi reportedly worked 120 hours per week. The addition of baristas and bakers have given them more of an opportunity to enjoy their customers and participate in the building of relationships with them, a hallmark of Agora's appeal. It should be noted that when hiring, they do not look for those with barista or baking experience, but individuals with a customer service skill set who are not afraid to display their passion for what they do. The result is happy customers as well as employees. Although construction on Caroline Street caused some inconvenience to patrons, the Agora Downtown Coffee Shop has continued to grow since its inception in 2015. With an idea of change to meet the customers' needs, there appears to be nothing but growth for them on the horizon.