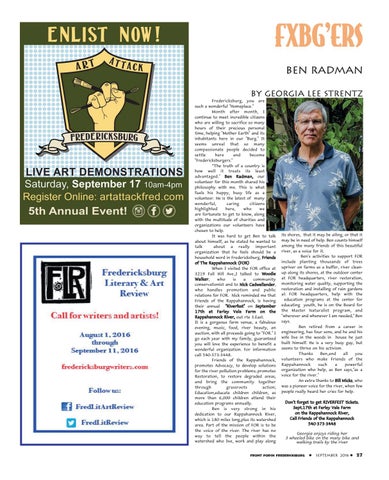 FREDERICKSBURG LAMP Only Available At

In alternating blue, light blue and green spray paint, Renda Writer, an artist based in Miami, wrote “World Peace” across the left side wall of Art Mart, an art gallery on 1405 Princess Anne St. The project began at 10 a.m. on Sunday, Aug. 7, a day that already promised to be sunny but humid. Writer gently eased between meeting and talking with community residents and spreading the message, “World Peace,” in large, even print across the wall. Writer’s stop in Fredericksburg was one of several cities he has already visited on his tour. Writer’s aim for the tour, “World called Peace Mural Tour,” is to create at least five murals on the theme of world peace in five major cities, i n c l u d i n g D e t r o i t , Philadelphia, B o s t o n , Washington D.C. and New York. Writer has made additional stops at nearby cities to create murals. FXBG was one of them. On a table inside of the gallery, Writer had placed a collection of miniature canvases with messages on them for sale, reading: “Life is the Adventure You Want it to Be,” “Your Comfort Zone Will Kill You,” “Love is a Risk, Do it Anyway.” “My art is really just reminders,” Writer said. “They remind you of things you already know.” Though the message “World Peace” seemed in sync with his other messages, why “World Peace,” specifically? “It just sort of came to me,” Writer said. “It was an extension of previous thoughts.” Writer said that “World Peace” is also the name of a song by hip hop One, who was in a pioneer and artist KRS-O group at the time called “Boogie Down Productions.” It was one of Writer’s favorite songs growing up, and into adulthood, the song had inspired him to reconsider what world peace meant. A friend of Writer’s and Fredericksburg native, Saghar Kasraie, said she had seen for herself art spreading a powerful message. Kasraie had been a spokesperson for a student organization in Iran, and during this time had gone to Israel and had seen hate graffiti on a wall. She later

saw artists covering the message with something positive, lovely. The incident stuck with Kasraie, who was later inspired to help Writer instill a similar, positive message. “It’s a vision,” Kasraie said about Writer’s mural tour. “It’s not about him, it’s about the message.” Nina Angelini, owner of Art Mart, said Kasraie and Fredericksburg resident Sue Henderson had initially connected Writer with the gallery. Angelini immediately accepted the request to have the gallery wall painted. The gallery has hosted international artists and pieces that have

focused on issues of social justice. “We seem to have the same ideas. One space can do what we need it to do,” Angelini said about Writer’s mural tour. Mentioning recent national and international tragedy and uncertainty, Angelini believes the message is needed. “What better way to bring light to dark?” Writer also mentioned recent, turbulent events, and feels urged to continue creating reminders. “The world is getting crazier,” Writer said. “and [world peace] is a message that needs to be out.” Kasraie believes that community and art can set the tone for change. “The only way to change the narrative is to come together,” Kasraie said. “You and me.” Writer is set to create a mural in New York beginning September 21, on International Day of Peace. To learn more, visit worldpeacemuraltour.com, Renda Writer’s Facebook Page, and Art Mart’s Facebook page. Emily Hollingsworth is a recent graduate of the University of Mary Washington and profiles artists, photographers and members of the FXBG community.

Fredericksburg, you are such a wonderful "Homeplace." Month after month, I continue to meet incredible citizens who are willing to sacrifice so many hours of their precious personal time, helping "Mother Earth" and its inhabitants here in our "Burg." It seems unreal that so many compassionate people decided to settle here and become "Fredericksburgers." “The truth of a country is how well it treats its least advantaged." Ben Radman, our volunteer for this month shared his philosophy with me. This is what fuels his happy, busy life as a volunteer. He is the latest of many wonderful, caring citizens highlighted here, who we are fortunate to get to know, along with the multitude of charities and organizations our volunteers have chosen to help. It was hard to get Ben to talk about himself, as he stated he wanted to talk about a really important organization that he feels should be a household word in Fredericksburg, Friends of The Rappahannock (FOR) When I visited the FOR office at 3219 Fall Hill Ave.,I talked to Woodie Walker, who is a community conservationist and to Nick Cadwallander, who handles promotion and public relations for FOR. Nick reminded me that Friends of the Rappahannock, is having their annual "Riverfest" on September 17th at Farley Vale Farm on the Rappahannock River, out rte 3.East. It is a gorgeous farm venue, a fabulous evening, music, food, river beauty, an auction, with all proceeds going to "FOR." I go each year with my family, guaranteed you will love the experience to benefit a wonderful organization. For information call 540-373-3448. Friends of the Rappahannock, promotes Advocacy, to develop solutions for the river pollution problems; promotes Restoration, to restore degraded areas, and bring the community together through grassroots action; Education,educate children children, as more than 6,000 children attend their education programs annually. Ben is very strong in his dedication to our Rappahannock River, which is 180 miles long,plus its watershed area. Part of the mission of FOR is to be the voice of the river. The river has no way to tell the people within the watershed who live, work and play along

its shores, that it may be ailing, or that it may be in need of help. Ben counts himself among the many friends of this beautiful river, as a voice for it. Ben's activities to support FOR include planting thousands of trees upriver on farms as a buffer, river cleanup along its shores, at the outdoor center at FOR headquarters, river restoration, monitoring water quality, supporting the restoration and installing of rain gardens at FOR headquarters, help with the education programs at the center for educating youth, he is on the Board for the Master Naturalist program, and "wherever and whenever I am needed," Ben says. Ben retired from a career in engineering, has four sons, and he and his wife live in the woods in house he just built himself. He is a very busy guy, but seems to thrive on his activism. Thanks Ben,and all you volunteers who make Friends of the Rappahannock such a powerful organization who help, as Ben says,"as a voice for the river." An extra thanks to Bill Micks, who was a pioneer voice for the river, when few people really heard her cries for help. Don't forget to get RIVERFEST tickets. Sept.17th at Farley Vale Farm on the Rappahannock River, Call-F Friends of the Rappahannock 540-3 373-3 3448 Georgia enjoys riding her 3 wheeled bike on the many bike and walking trails by the river