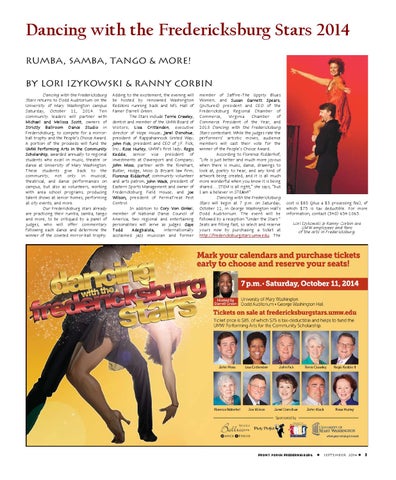 spotlight on the va deli

companions: hey, nice to meet you!

Art in the Burg: pictures that tell a story

the garden as art: tale of two artists

on the porch...life in fredericksburg Messages

VA Wineries... tips on getting most from winery visit

will power: the brews are a changin

dancing with the stars 2014

Dancing with the Fredericksburg Stars 2014

Dancing with the Fredericksburg Stars returns to Dodd Auditorium on the University of Mary Washington campus Saturday, October 11, 2014. Ten community leaders will partner with Michael and Melissa Scott, owners of Strictly Ballroom Dance Studio in Fredericksburg, to compete for a mirrorball trophy and the People’s Choice Award. A portion of the proceeds will fund the UMW Performing Arts in the Community Scholarship, awarded annually to regional students who excel in music, theatre or dance at University of Mary Washington. These students give back to the community, not only in musical, theatrical, and dance performances on campus, but also as volunteers, working with area school programs, producing talent shows at senior homes, performing at city events, and more. Our Fredericksburg stars already are practicing their rumba, samba, tango and more, to be critiqued by a panel of judges, who will offer commentary following each dance and determine the winner of the coveted mirror-ball trophy.

member of Saffire–The Uppity Blues Women; and Susan Garnett Spears, (pictured) president and CEO of the Fredericksburg Regional Chamber of Commerce, Virginia Chamber of Commerce President of the Year, and 2013 Dancing with the Fredericksburg Stars contestant. While the judges rate the performers’ artistic moves, audience members will cast their vote for the winner of the People’s Choice Award. According to Florence Ridderhof, “Life is just better and much more joyous when there is music, dance, drawings to look at, poetry to hear, and any kind of artwork being created, and it is all much more wonderful when you know it is being shared…. STEM is all right,” she says, “but I am a believer in STEAM!” Dancing with the Fredericksburg Stars will begin at 7 p.m. on Saturday, October 11, in George Washington Hall’s Dodd Auditorium. The event will be followed by a reception “Under the Stars.” Seats are filling fast, so select and reserve yours now by purchasing a ticket at http://fredericksburgstars.umw.edu. The