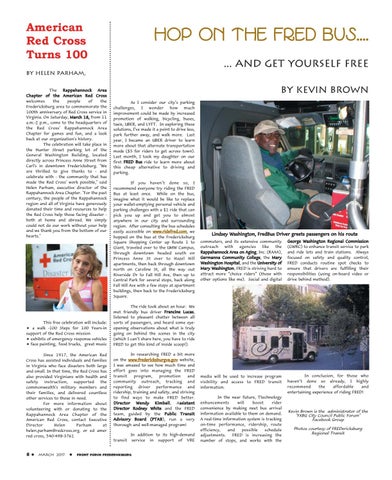 ... and Get Yourself Free

by Helen Parham, Rappahannock Area The Chapter of the American Red Cross welcomes the people of the Fredericksburg area to commemorate the 100th anniversary of Red Cross service in Virginia. On Saturday, March 18, from 11 a.m.-2 p.m., come to the headquarters of the Red Cross' Rappahannock Area Chapter for games and fun, and a look back at our organization's history. The celebration will take place in the Hunter Street parking lot of the General Washington Building, located directly across Princess Anne Street from Carl's in downtown Fredericksburg. "We are thrilled to give thanks to - and celebrate with - the community that has made the Red Cross' work possible," said Helen Parham, executive director of the Rappahannock Area Chapter. "For the past century, the people of the Rappahannock region and all of Virginia have generously donated their time and resources to help the Red Cross help those facing disaster both at home and abroad. We simply could not do our work without your help and we thank you from the bottom of our hearts."

This free celebration will include: a walk -100 Steps for 100 Years-in support of the Red Cross mission exhibits of emergency response vehicles face painting, food trucks, great music Since 1917, the American Red Cross has assisted individuals and families in Virginia who face disasters both large and small. In that time, the Red Cross has also provided Virginians with health and safety instruction, supported the commonwealth's military members and their families, and delivered countless other services to those in need. For more information about volunteering with or donating to the Rappahannock Area Chapter of the American Red Cross, contact Executive Director Helen Parham at helen.parham@redcross.org. or ed amer red cross, 540-498-3761

As I consider our city’s parking challenges, I wonder how much improvement could be made by increased promotion of walking, bicycling, buses, taxis, UBER, and LYFT. In exploring these solutions, I’ve made it a point to drive less, park further away, and walk more. Last year, I became an UBER driver to learn more about that alternate transportation mode ($5 for riders to get across town). Last month, I took my daughter on our first FRED Bus ride to learn more about this cheap alternative to driving and parking. If you haven’t done so, I recommend everyone try riding the FRED Bus at least once. While on the bus, imagine what it would be like to replace your wallet-emptying personal vehicle and parking challenges with a $1 ride that can pick you up and get you to almost anywhere in our city and surrounding region. After consulting the bus schedules easily accessible on www.ridefred.com, we hopped on the bus at the Fredericksburg Square Shopping Center up Route 1 to Giant, traveled over to the UMW Campus, through downtown headed south on Princess Anne St over to Hazel Hill apartments, then back through downtown north on Caroline St, all the way out Riverside Dr to Fall Hill Ave, then up to Central Park for several stops, back along Fall Hill Ave with a few stops at apartment buildings, then back to the Fredericksburg Square.

Our cover photo this month is provided by local artist Carol Coffman. Coffman has long been a member at Art First on Caroline Street, one of the area’s oldest art co-ops. While studying for her Master’s of Interdisciplinary Studies in Interdisciplinary Art from Virginia Commonwealth University, Coffman found the gallery to be a place of diverse companionship and camaraderie for local artists.

Lindsey Washington, FredBus Driver greets passengers on his route commuters, and its extensive community outreach with agencies like the Rappahannock Area on Aging, Inc. (RAAA), Germanna Community College, the Mary Washington Hospital, and the University of Mary Washington, FRED is striving hard to attract more “choice riders” (those with other options like me). Social and digital

The ride took about an hour. We met friendly bus driver Francine Lucas, listened to pleasant chatter between all sorts of passengers, and heard some eyeopening observations about what is truly going on behind the scenes in the city (which I can’t share here, you have to ride FRED to get this kind of inside scoop!). In researching FRED a bit more on the www.fredericksburgva.gov website, I was amazed to see how much time and effort goes into managing the FRED transit program, promotion and community outreach, tracking and reporting driver performance and ridership, training and safety, and striving to find ways to make FRED better. Director Wendy Kimball, Assistant Director Rodney White and the FRED team, guided by the Public Transit Advisory Board (PTAB), run a very thorough and well-managed program!

In addition to its high-demand service in support of VRE

Coffman has taught art in area public elementary and middle schools, and she currently teaches at North Stafford High School. Her commissions have included several portraits, murals, and a game board design. In addition to solo shows, she has participated in many group shows, juried shows, and has donated work to a variety of benefit auctions. Through her work, Coffman says she celebrates the magic of the everyday and those elusive moments that seem charged or symbolically significant. This has been the focus in her recent work, including the cover image, Alley Behind Picker’s . Coffman describes her process of painting the image: “I was interested in experimenting and playing with the paint. With Picker’s Alley, I went back to

media will be used to increase program visibility and access to FRED transit information. In the near future, Ttechnology enhancements will boost rider convenience by making next bus arrival information available to them on demand. A real-time information system is tracking on-time performance, ridership, route efficiency, and possible schedule adjustments. FRED is increasing the number of stops, and works with the

In conclusion, for those who haven’t done so already, I highly recommend the affordable and entertaining experience of riding FRED!

rendering areas more, almost obsessively. I worked with my background first before painting in my subject matter. Then I approached the painting thinking about design. With every color I applied I asked myself if this was the last thing I added what would the painting be? I like the approach of playing, and then creating a sense of order. I started out without rules and then made up my own set of rules for each design element.” Coffman says all of her art, whether it’s obvious or not, has a narrative to it. While certain images, like the alley cat in Picker’s Alley, are symbolic for her, she says, “I don’t ever want it to be concrete. It’s more of a suggestion, and I like to see what other people get out of the narrative. Sometimes it’s what I was thinking, and sometimes it’s not. My alley cat isn’t necessarily your alley cat.”

One First Friday, I was waiting for friends near Picker’s Alley, and the entire back end of the alley was lit up in Market Square. The yellow was popping, and it was as if something exciting was going on there. It interested me because this unexpected dark alley led to something glowing with hot activity. Alleys can be surprising that way.” You can enjoy more of Carol Coffman’s work at her website, carolcoffman.com, or see her work in person at Art First Gallery.

While Coffman says she’d never turn away a donation of paint, she prefers to use high quality products because they offer a level of predictability that allows her creative freedom like that on display in Picker’s Alley. Her mediums of choice are watercolor, colored pencil, and acrylic paint, specifically Golden fluid acrylics. She says, “When you use a lower quality paint, it has more filler and you wonder why it’s not doing what you expect. Golden is really versatile. Once you have used a high quality paint, it’s hard to go back.” Coffman says she was drawn to painting Picker’s Alley because she has a love of alleys in general. She explains, “Alleys are considered pretty utilitarian. We’re not really meant to notice them.

La Source... Experience the Restorative Power of the Sea