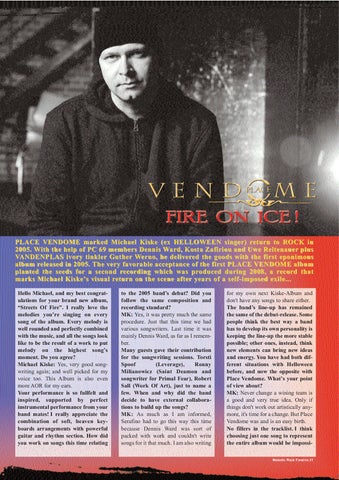 PLACE VENDOME marked Michael Kiske (ex HELLOWEEN singer) return to ROCK in 2005. With the help of PC 69 members Dennis Ward, Kosta Zafiriou and Uwe Reitenauer plus VANDENPLAS ivor y tinkler Guther Werno, he delivered the goods with the first eponimous album released in 2005. The ver y favorable acceptance of the first PLACE VENDOME album planted the seeds for a second recording which was produced during 2008, a record that marks Michael Kiske’s visual return on the scene after years of a self-imposed exile... Hello Michael, and my best congratulations for your brand new album, “Streets Of Fire”. I really love the melodies you’re singing on every song of the album. Every melody is well rounded and perfectly combined with the music, and all the songs look like to be the result of a work to put melody on the highest song’s moment. Do you agree? Michael Kiske: Yes, very good songwriting again; and well picked for my voice too. This Album is also even more AOR for my ears. Your performance is so fullfelt and inspired, supported by perfect instrumental performance from your band mates! I really appreciate the combination of soft, heaven keyboards arrangements with powerful guitar and rhythm section. How did you work on songs this time relating

to the 2005 band’s debut? Did you follow the same composition and recording standard? MK: Yes, it was pretty much the same procedure. Just that this time we had various songwriters. Last time it was mainly Dennis Ward, as far as I remember. Many guests gave their contribution for the songwriting sessions. Torsti Spoof (Leverage), Ronny Milianowicz (Saint Deamon and songwriter for Primal Fear), Robert Sall (Work Of Art), just to name a few. When and why did the band decide to have external collaborations to build up the songs? MK: As much as I am informed, Serafino had to go this way this time because Dennis Ward was sort of packed with work and couldn't write songs for it that much. I am also writing

for my own next Kiske-Album and don't have any songs to share either. The band’s line-up has remained the same of the debut-release. Some people think the best way a band has to develop its own personality is keeping the line-up the more stable possible; other ones, instead, think new elements can bring new ideas and energy. You have had both different situations with Helloween before, and now the opposite with Place Vendome. What’s your point of view about? MK: Never change a wining team is a good and very true idea. Only if things don't work out artistically anymore, it's time for a change. But Place Vendome was and is an easy birth. No fillers in the tracklist. I think choosing just one song to represent the entire album would be impossiMelodic Rock Fanzine 21 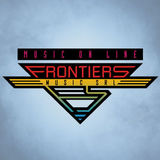