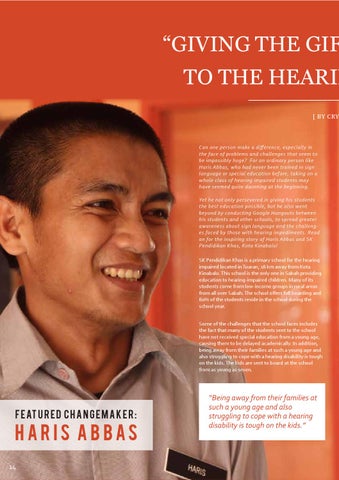 TO HEARIN THE HE TO THE [ BY CRY

one person make a in diﬀerence, es Can one person make Can a diﬀerence, especially the challenges face of problems and challenges the face of problems and that seem to be impossibly be impossibly huge? For an ordinaryhuge? personFor likean ordinary who had never been tra Haris Abbas, who had Haris neverAbbas, been trained in sign languagebefore, or special education language or special education taking on a before classstudents of hearing whole class of hearingwhole impaired mayimpaired stud have seemed daunting at the b have seemed quite daunting at the quite beginning.

Yet heinnot onlyhis persevered Yet he not only persevered giving students in giving h the best education possible, but he a the best education possible, but he also went conducting Google Hango beyond by conductingbeyond Google by Hangouts between students and other schools, to sp his students and otherhis schools, to spread greater about language and t awareness about sign awareness language and thesign challengfaced by those with hearing es faced by those witheshearing impediments. Read imped on for the inspiring story on for the inspiring story of Haris Abbas and SKof Haris Abb Pendidikan Khas, KotaPendidikan Kinabalu! Khas, Kota Kinabalu!

Pendidikan is ahearing primary school f SK Pendidikan Khas is aSK primary schoolKhas for the impaired in Tuaran, impaired located in Tuaran, 18 kmlocated away from Kota 18 km away Kinabalu. Thisinschool the only one in S Kinabalu. This school is the only one Sabahisproviding education to hearing-impaired education to hearing-impaired children. Many of its children. students come low-income students come from low-income groupsfrom in rural areas groups all oﬀers over Sabah. The school from all over Sabah. Thefrom school full boarding and oﬀers fu 80%inofthe theschool students reside 80% of the students reside during thein the school school year. school year.

A magazine for teachers, parents and changemakers in education. Welcome to our first issue! 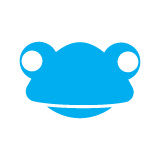