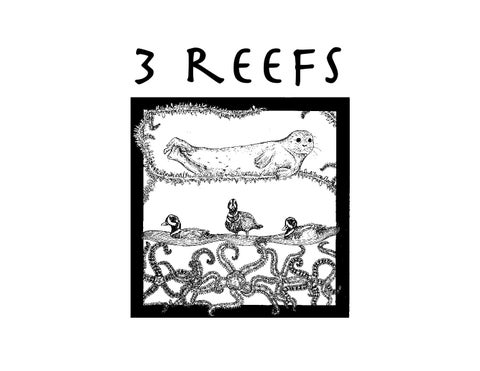 Ecological significance At the northern reaches of British Columbia’s Salish Sea, three unique marine reef ecosystems stand out. Pushing into the rich mix of oceanic waters, where the flood tides rounding Vancouver Island meet, 3 reefs boast a wealth of biodiversity. The marine food chains here support an amazing diversity of life – from diatom to coastal wolf! May the 3 reefs atlas whet your curiosity!

Geological ForMation In the 3 reefs area, 30 – 40 million years of ice age sediments were depressed below sea level during the last glacial maximum. This area then rebounded rapidly, by more than 100 meters, immediately after the retreat of the glaciers, approximately 11-12 million years ago. Cortes, Marina and Hernando Islands probably extended to the outer limits of the present day reefs but were subsequently reduced in size by wave erosion. Sand and mud were removed to the Strait of Georgia basin while leaving behind boulders, cobbles and pebbles. The 3 reefs landscape is characterized by these sediments strewn over wave cut terraces that are exposed during the lowest tides of the year – true intertidal wilderness! &quot;!3!&quot;!

Rock Sandpiper Calidrus ptilocnemis Robust and short-legged, the Rock Sandpiper works the exposed rocky terraces of 3 reefs in search of crustaceans and molluscs.

The metabolic demands of these migratory shorebirds are high and require feeding stopover areas with high concentrations of food resources. The varying lengths and shapes of bills in shorebirds allow them to exploit unique feeding niches, thus reducing direct competition on food resources. This ecological principle is known as ecological partitioning and 3 reefs notable diversity of habitat meets the shorebirds needs. ! &quot;!7!&quot;!

Interstitial nursery Interstitial is a great word! It should be in everyone’s everyday vocabulary! It literally means – the spaces between, and is an essential component of 3 reefs. Pick up a handful of gravel from the reef; believe it or not, there is an entire microcosm of organisms living in the spaces between the individual rock particles. Juvenile brittle stars, segmented worms and ochre starfish thrive in the gravel nurseries on 3 reefs. Yes, a nursery… where juveniles are protected from predators, nourished by strong currents delivering food &amp; oxygen and providing safety from waves that could sweep them out to sea. Look closely! &quot;!9!&quot;!

The Giant Pacific Octopus is just that – a giant, the largest species of octopus in the world, with an arm spread of 3-7 meters and weighing in at 50-70 kilograms! They grow fast - the oxygen and nutrient rich waters off 3 reefs, providing the perfect… octopus’s garden! In her third year, a female octopus will seek out a rocky den or overhang and attach her eggs, up to 200,000, to the ceiling. The eggs hang down in bundles looking like clusters of tiny grapes and the female tends them: aerating, cleaning and protecting them from predators. The female stands guard over them until the last egg hatches, 2-3 months along, and then she dies.

“Sealers who were hunting their prey on shore dressed in sealskins and rolled around on the rocks, imitating the sounds the seals make. Seal hunting was a special occupation practiced by men who had obtained a particular guardian spirit.”

Harbour Seal The harbour seal is a year round resident in the Salish Sea and numbers are relatively abundant. Harbour seals have been protected in British Columbia since 1970. 3 reefs provide haul out areas and critical breeding rookeries for the harbour seal, which is gregarious by nature. Females become sexually mature at 3-6 years of age and pupping occurs locally from June – August. The single pup is precocious and can follow its mother on land or into the water within 5 minutes of birth. The successful reproduction of harbour seals is directly linked to the success of the Bigg’s Killer Whale population in the Salish Sea. Harbour seals are the primary prey of the Bigg’s Killer Whales and 3 reefs provide important prey “hot-spots” for these whales that “trapline”; a feeding behavior that involves moving between widely spaced prey “hot-spots”. &quot;!13!&quot;!

A Fish by Many naMes Plainfin Midshipman, toadfish, singing fish, grunting fish The rows of buttons on a midshipman’s uniform are mirrored by the lines of photophores on the belly of this fish. This fish is the only BC representative of the toadfish family. By squeezing air through the diaphragm of this fish’s gas bladder, the sounds range from singing to grunting! Call him what you will, Porichthys notatus, is one of a kind – no scales, lives deeper than 200 meters and spawns intertidally! 3 reefs provide extensive mid intertidal rocky habitat for spawning midshipmen. In the spring, females and males excavate nests under rocks, eggs are fertilized, females attach eggs to the underside of the rocks and leave. The fasting males guard the eggs until the young are fee swimming, months later. !

Excerpt from field notes: May 24, 2001 Marina Reef 2.0” tide @ 1240 We rounded the point enroute the reef and stopped in our tracks! Eagles, a hundred plus – in the air, perched on trees at the water’s edge and on erratic boulders on the reef. We pulled out binoculars and watched…midshipmen wriggling in their talons… the females making a quick exit! &quot;!17!&quot;!

Eelgrass Meadows Our locally occurring native eelgrass, Zostera marina, is a seagrass. Seagrasses are used world wide as indicators of nearshore health. Extensive, healthy meadows of eelgrass are found in conjunction with 3 reefs. The complex 3-dimensional habitat created by the leaves of eelgrass growing up from a tangled rhizome mat, provides shelter and food for a large diversity of organisms, including Pacific herring and salmon. Eelgrass beds are characterized by high productivity. Not only are the leaves of the eelgrass actively photosynthesizing, but the surface of the leaves are colonized by epiphytes – plants living on the eelgrass leaves that are also actively photosynthesizing. Double up on productivity! Zostera marina, like all sea grasses, is a true flowering land plant adapted to living submerged in seawater. Flower shown in inset.

Bay Pipefish Syngnathus leptorhynchus - is a stretched out, tailed version of the familiar seahorse.

Great Blue Heron The Great Blue Heron is a year-round resident of the Salish Sea. The local subspecies fannini, is presently blue-listed in British Columbia; a species at risk. Habitat destruction is the largest threat to this species in the Georgia Basin, the fastest growing area in coastal BC. 3 reefs provide critical habitat for feeding herons in close proximity to prime nesting habitat; this is significant! The size of a Great Blue Heron population is correlated directly with the area of foraging habitat available locally. In developed areas, such as the Fraser River estuary, the lack of nesting habitat near foraging habitat has also been shown to limit heron populations. !

coastal wolves One wolf taxonomically, Canis lupus – the grey wolf, but genetic, ecological and behavioral differences set coastal wolves apart from mainland wolves. Recent research indicates the presence of a genetic cline (slope) between wolves separated by less than 30 kilometers on an east/ west gradient; that is noteworthy! Chris Darimont, coastal wolf researcher with Raincoast Conservation Foundation, describes wolves as”…living life at the edge with two paws in the ocean and two paws on land.” Coastal wolves can make greater than 75% of their living from marine resources like seals, stranded marine mammals and salmon; they even dig for clams! !

For the coastal wolves living in the Discovery Islands, 3 reefs provide prime foraging habitat with extensive harbour seal haul outs and large breeding rookeries. 3 reefs also boast rich clam beds where local wolf packs end up digging clams side by side with local Islanders in the dead of night on the low winter tides!

Sea ducks are used as indicators of the health of marine ecosystems. Sadly, many populations are in decline. The surf scoter, a common migrant to 3 reefs, is showing a steady population decline. Threats to the surf scoter include oil spills, coastal development, increased predation and contaminants in the food chain. 3 reefs provide this blue-listed species at risk, with a critical winter oasis. Sea ducks are migratory birds governed and protected by the Migratory Treaty Act of 1918. &quot;!29!&quot;!

All kelp are seaweeds but not all seaweeds are kelp!

Named for Feodor Petrovich Litke, Russian Commander of the last of the great scientific expeditions to the Northwest Coast of America; Seniavin Expedition 1826-1829.

There are four families of kelp, three of which occur in British Columbia. 3 reefs boast several species of kelp; bull kelp the largest of them. From its gas filled float at the surface, the bull kelp stipe may extend down 20 meters, holding onto rocky surfaces with its unique, holdfast. Root-like, but not a root, stubby branches sprout at the base of the plant and wedge themselves into rocky crevices to hold the kelp fast to the rock. Kelp plants provide the framework for kelp forests – underwater forests! Like forests on land, kelp forests are complex communities that enhance local marine biodiversity. Their 3-dimensional structure becomes layered, or stratified, as the forest grows in complexity. These multiple layers offer many kinds of habitats, which in turn, promote a greater diversity of inhabitants. &quot;!31!&quot;!

interstitial habitat Imagine your kitchen floor covered in cantaloupe, oranges and watermelon. Now imagine all the spaces between the fruit! !

Family Vermetidae Marine snails with irregular shells; uncoiled, elongated, tubular and cemented to hard surfaces. Suspension feeding snails that secrete mucous nets and use them for feeding. I call it a variation on lacrosse – mucous net help high in interstitial space, plankton captured, rolled into balls and transferred to mouth!

“In British Columbia less than one percent of the total marine environment provides any level of protection for species and their habitat.” ~ CPAWS

The Three Reefs Atlas (The 3 Reefs) – The 3 Reefs Project At the northern reaches of the Salish Sea, three unique marine reef ecosystems push into the rich mix of oceanic waters, where the flood tides rounding Vancouver Island meet. The 3 Reefs boast a wealth of biodiversity; the marine food chains here spanning the spectrum from– from diatom to coastal wolf! These spectacular rocky reef systems on the southern tips of Hernando Island, Cortes Island and Marina Island are the rebounded remains of 30 - 40 million year old ice age sediments originally depressed below sea level during the last glacial maximum. Sand and mud eroded away into the Strait of Georgia Basin, leaving behind boulders, cobbles and pebbles strewn over wave-cut terraces exposed only on the lowest tides of the year; true intertidal wilderness! Our field observations are being compiled to prove that these reef systems are unique in coastal British Columbia, which is the prerequisite to qualifying them for marine protected area status. 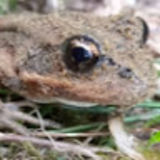