State of the River Report 2016 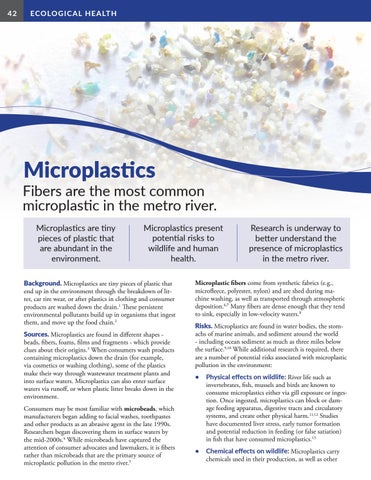 Fibers are the most common microplastic in the metro river. Microplastics are tiny pieces of plastic that are abundant in the environment.

Background. Microplastics are tiny pieces of plastic that end up in the environment through the breakdown of litter, car tire wear, or after plastics in clothing and consumer products are washed down the drain.1 These persistent environmental pollutants build up in organisms that ingest them, and move up the food chain.2 Sources. Microplastics are found in different shapes beads, fibers, foams, films and fragments - which provide clues about their origins.3 When consumers wash products containing microplastics down the drain (for example, via cosmetics or washing clothing), some of the plastics make their way through wastewater treatment plants and into surface waters. Microplastics can also enter surface waters via runoff, or when plastic litter breaks down in the environment. Consumers may be most familiar with microbeads, which manufacturers began adding to facial washes, toothpastes and other products as an abrasive agent in the late 1990s. Researchers began discovering them in surface waters by the mid-2000s.4 While microbeads have captured the attention of consumer advocates and lawmakers, it is fibers rather than microbeads that are the primary source of microplastic pollution in the metro river.5

Research is underway to better understand the presence of microplastics in the metro river.

Microplastic fibers come from synthetic fabrics (e.g., microfleece, polyester, nylon) and are shed during machine washing, as well as transported through atmospheric deposition.6,7 Many fibers are dense enough that they tend to sink, especially in low-velocity waters.8 Risks. Microplastics are found in water bodies, the stomachs of marine animals, and sediment around the world - including ocean sediment as much as three miles below the surface.9,10 While additional research is required, there are a number of potential risks associated with microplastic pollution in the environment: â&amp;#x20AC;˘ Physical effects on wildlife: River life such as invertebrates, fish, mussels and birds are known to consume microplastics either via gill exposure or ingestion. Once ingested, microplastics can block or damage feeding apparatus, digestive tracts and circulatory systems, and create other physical harm.11,12 Studies have documented liver stress, early tumor formation and potential reduction in feeding (or false satiation) in fish that have consumed microplastics.13 â&amp;#x20AC;˘ Chemical effects on wildlife: Microplastics carry chemicals used in their production, as well as other

State of the River Report 2016