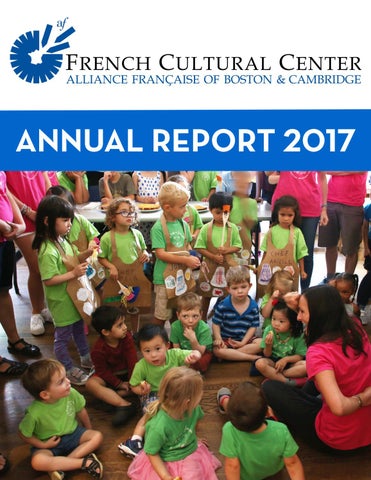 LEADERSHIP MESSAGE When “online fatigue” sets in, just come to the French Cultural Center. That is what many, many people are, in fact, doing. At a time when the demands and distractions of electronic life seem almost endless, the Center’s classes, concerts, wine tastings, book readings, gallery openings and receptions are filling up faster than ever. We know what it’s about – and you do, too. People want community – real community, where they can make and mingle with friends…discover and enjoy… share and learn… discuss and laugh. The Center saw growth and evolution in all activity areas in 2017. Children, teens and adults alike flocked to the rich array of activities. In education, the year saw a solid increase in group class registrations. The Summer in French program broke records. The teens program did particularly well. In culture, we welcomed U.S. Supreme Court Justice Stephen Breyer, French court artist Noëlle Herrenschmidt and French painter and sculptor Bernar Venet, among many others. Bastille Day 2017 (sold out!) welcomed musicians Daby Touré of Mauritania and Ben l’Oncle Soul from France. The library/médiathèque launched new reading programs to engage members and students. Once again, we participated in the Boston Book Festival, welcoming renowned French authors Édouard Louis, Christophe Boltanski and Christine Angot. The enthusiasm of members and students reflects the fact that the Center serves the needs of a vibrant community that is met nowhere else in Boston. With that conviction, the Board of Trustees has voted to proceed with a planned building renovation. In 2017, we raised $1.5 million for the project, and fundraising continues. The renovation will proceed in stages, over several years, to minimize disruption. The project will see a major upgrade of the children’s classroom suite…a beautiful teaching kitchen and wine cellar…new and enlarged classrooms…more community space…and a variety of behind-the-scenes improvements to enhance comfort and safety, and to make the Center accessible to people with limited mobility. We are here to serve the Francophone and Francophile community – and we are delighted that you have chosen to be part of it!

Chairman, Board of Trustees

CDs and DVDs in our library

Cultural events with more than 5,100 attendees

2017 PROGRAM HIGHLIGHTS Cultural Program For the past 72 years, the French Cultural Center has been an integral part of Boston’s cultural and intellectual scene. It is a place to experience literature, cinema, design, music, theatre, fashion, gastronomy, and business, as well as scientific and technological innovation, from the Frenchspeaking world. • Bastille Day 2017 sold out, welcoming two Francophone ©Michael Blanchard Photography

• The Boston Book Festival 2017 enlightened the crowd with renowned French authors including Édouard Louis, Christophe Boltanski, and Christine Angot. • We proposed various fashion oriented programs including book signings and lectures as part of our Through the Seams events. • We developed and reinforced partnerships with local institutions, including, Harvard University, Northeastern University, and the Museum of Fine Arts, that lead to new projects and exhibitions.

Education Program • 2017 saw a solid increase in group class registrations. • We broke a record for registrations in our Summer in French program with 293 children and 60 teen registrations. • Our annual Festinema children’s film program welcomed over 100 children from surrounding schools. • Over 150 middle and high school students visited the Center during our organized field trips. • We offered 440 hours of free French classes as part of the official curricula in 3 Boston area schools through our Accent on Success program. The 2017 schools were Taylor Elementary, Burke High School and Edward M Kennedy.

Library • We have 31,172 French books, documents, CDs and DVDs in our Library. • On our digital platform, Culturethèque, we have a total of 196,876 items for reading, downloading, and streaming. • We have added an app library of 60 learning resources and games to our in-library collection. • We have about 40 podcasts recommended in our selection, with the added benefit of the “explore” section in French for unlimited future suggestions as this resource gains in popularity. • We’ve recently added the children’s online library epic! to our offerings, adding 100 digital books and audio offerings specifically for children and families.

FUNDRAISING EVENTS Le Bal Dada April 1, 2017 For our sixth annual spring gala, we opened up three floors of our double brownstone mansion for a surreal soirée. With tremendous support from our Honorary Hosts and Bal Committee, our staff completely transformed the Center to create a Dada absurdist atmosphere. As they explored the house, guests discovered surprises at every turn. Proceeds ©Michael Blanchard Photography

become Boston’s finest wine event, featuring stellar wines, exceptional vintages and world-renowned vintners. What makes this black-tie affair unique is also the sense of community among the guests who share a dedication to the mission of the French Cultural Center as well as a profound appreciation for the fine wines of France. Held at the Chilton Club in Boston, the 2017 wine dinner featured outstanding wines from Vignobles Comtes von Neipperg, which were presented by guest of honor Count Stephan von Neipperg, owner of Vignobles Comtes von Neipperg.

Bastille Day July 14, 2017 Our 42nd annual Bastille Day block party took place on July 14, 2017 and welcomed a sold out crowd for the fourth year in a row. 2,000 people joined us on Boston’s tree-lined Marlborough Street to celebrate

Franco-American friendship, cultural diversity in New England and the pillars of the French republic: Liberté, Égalité, and Fraternité. One of the largest Bastille Day events in the United States, this was a party in true French style, complete with music, dancing, children’s activities, drinks and food from some of New England’s best French restaurants.

The VIP Reception welcomed members of our sponsor and donor community, including many of Boston’s arts and culture, business, government and philanthropic leaders. Un grand merci to our corporate sponsors, Air France, Natixis Global Asset Management and Ropes &amp; Gray LLP, for their indispensable support of our signature community event. ©Michael Blanchard Photography

LEADERSHIP GIVING As a 501(c)(3) non-profit organization, the French Cultural Center maintains its high standard of education and cultural programming thanks to the generosity of many individuals, corporations and organizations.

The Katharine Lane Weems Society Named for the noted Boston sculptor who generously bequeathed her home at 53 Marlborough Street to serve as the headquarters of the French Cultural Center, the Katharine Lane Weems Society honors our supporters who make planned gifts to the Center. A planned gift through your estate is a wonderful way to leave a legacy of your support of the Center, and will help assure the continued and future success of our programs. Whether by bequest, charitable trust or gift annuity, donors can provide essential, lasting support to the Center and, in many cases, enjoy financial/tax benefits. For more information please contact Joyce Grippen, Director of Development, or call 617.912.0400 ext. 428. 8

MERCI! The French Cultural Center is able to offer hundreds of educational and cultural programs for the New England community each year thanks to the generosity of many individuals, corporations and organizations. We are a 501(c)(3) non-profit organization which operates from private funds. The Center gratefully acknowledges the following donors and sponsors who contributed $1000 or more in 2017.

Consulate General of France in Boston

Consulate General of France in Boston

2017 FINANCIAL INFORMATION The French Cultural Center reduced its operating deficit to $136,000 in 2017. This improvement was achieved mainly through careful management of expenses. Strong enrollments in Education Programs continued to contribute to the overall financial success. In addition to the operating results shown below, the Center also secured contributions to the Building Renovation Fund in the amount of $1,018,000 as well as contributions to the MosaĂŻque Fund for benefit of future Cultural Events by over $54,000. The Centerâ&amp;#x20AC;&amp;#x2122;s endowment was valued at $14,178,700 as of December 31, 2017, an increase of 9% from 2016.

Except where noted, photographs are property of the French Cultural Center. 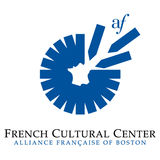