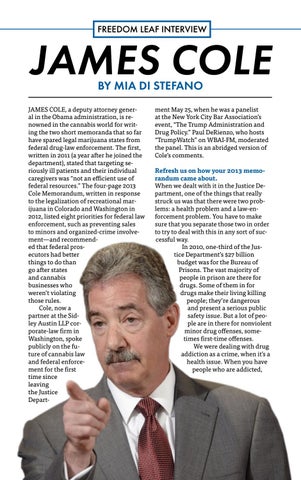 JAMES COLE, a deputy attorney general in the Obama administration, is renowned in the cannabis world for writing the two short memoranda that so far have spared legal marijuana states from federal drug-law enforcement. The first, written in 2011 (a year after he joined the department), stated that targeting seriously ill patients and their individual caregivers was “not an efficient use of federal resources.” The four-page 2013 Cole Memorandum, written in response to the legalization of recreational marijuana in Colorado and Washington in 2012, listed eight priorities for federal law enforcement, such as preventing sales to minors and organized-crime involvement—and recommended that federal prosecutors had better things to do than go after states and cannabis businesses who weren’t violating those rules. Cole, now a partner at the Sidley Austin LLP corporate-law firm in Washington, spoke publicly on the future of cannabis law and federal enforcement for the first time since leaving the Justice Depart-

ment May 25, when he was a panelist at the New York City Bar Association’s event, “The Trump Administration and Drug Policy.” Paul DeRienzo, who hosts “TrumpWatch” on WBAI-FM, moderated the panel. This is an abridged version of Cole’s comments. Refresh us on how your 2013 memorandum came about. When we dealt with it in the Justice Department, one of the things that really struck us was that there were two problems: a health problem and a law-enforcement problem. You have to make sure that you separate those two in order to try to deal with this in any sort of successful way. In 2010, one-third of the Justice Department’s $27 billion budget was for the Bureau of Prisons. The vast majority of people in prison are there for drugs. Some of them in for drugs make their living killing people; they’re dangerous and present a serious public safety issue. But a lot of people are in there for nonviolent minor drug offenses, sometimes first-time offenses. We were dealing with drug addiction as a crime, when it’s a health issue. When you have people who are addicted, 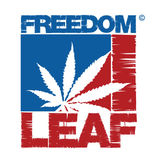