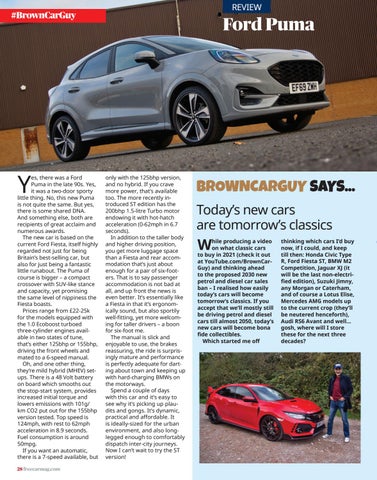 es, there was a Ford Puma in the late 90s. Yes, it was a two-door sporty little thing. No, this new Puma is not quite the same. But yes, there is some shared DNA. And something else, both are recipients of great acclaim and numerous awards. The new car is based on the current Ford Fiesta, itself highly regarded not just for being Britain’s best-selling car, but also for just being a fantastic little runabout. The Puma of course is bigger – a compact crossover with SUV-like stance and capacity, yet promising the same level of nippiness the Fiesta boasts. Prices range from £22-25k for the models equipped with the 1.0 Ecoboost turboed three-cylinder engines available in two states of tune, that’s either 125bhp or 155bhp, driving the front wheels and mated to a 6-speed manual. Oh, and one other thing, they’re mild hybrid (MHEV) setups. There is a 48 Volt battery on board which smooths out the stop-start system, provides increased initial torque and lowers emissions with 101g/ km CO2 put out for the 155bhp version tested. Top speed is 124mph, with rest to 62mph acceleration in 8.9 seconds. Fuel consumption is around 50mpg. If you want an automatic, there is a 7-speed available, but 28 freecarmag.com

only with the 125bhp version, and no hybrid. If you crave more power, that’s available too. The more recently introduced ST edition has the 200bhp 1.5-litre Turbo motor endowing it with hot-hatch acceleration (0-62mph in 6.7 seconds). In addition to the taller body and higher driving position, you get more luggage space than a Fiesta and rear accommodation that’s just about enough for a pair of six-footers. That is to say passenger accommodation is not bad at all, and up front the news is even better. It’s essentially like a Fiesta in that it’s ergonomically sound, but also sportily ing for taller drivers – a boon for six-foot me. The manual is slick and enjoyable to use, the brakes reassuring, the ride is surprisingly mature and performance is perfectly adequate for darting about town and keeping up with hard-charging BMWs on the motorways. Spend a couple of days with this car and it’s easy to see why it’s picking up plaudits and gongs. It’s dynamic, practical and affordable. It is ideally-sized for the urban environment, and also longlegged enough to comfortably dispatch inter-city journeys. Now I can’t wait to try the ST version!

hile producing a video on what classic cars to buy in 2021 (check it out at YouTube.com/BrownCarGuy) and thinking ahead to the proposed 2030 new petrol and diesel car sales ban – I realised how easily today’s cars will become tomorrow’s classics. If you accept that we’ll mostly still be driving petrol and diesel cars till almost 2050, today’s new cars will become bona Which started me off

thinking which cars I’d buy now, if I could, and keep till then: Honda Civic Type R, Ford Fiesta ST, BMW M2 Competition, Jaguar XJ (it will be the last non-electriany Morgan or Caterham, and of course a Lotus Elise, Mercedes AMG models up to the current crop (they’ll be neutered henceforth), Audi RS6 Avant and well… gosh, where will I store these for the next three decades? 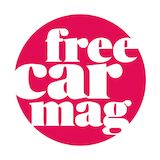 A sceptical view of Electric Vehicles, the truth about the Sinclair C5 plus loads of road tests, including the Ford Puma, Lexus and Range Ro...

A sceptical view of Electric Vehicles, the truth about the Sinclair C5 plus loads of road tests, including the Ford Puma, Lexus and Range Ro...