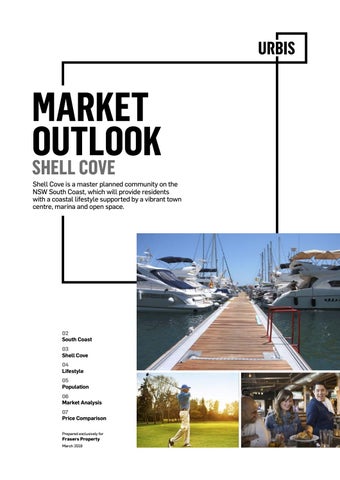 MARKET OUTLOOK SHELL COVE Shell Cove is a master planned community on the NSW South Coast, which will provide residents with a coastal lifestyle supported by a vibrant town centre, marina and open space.

The South Coast region is renowned for its outdoor coastal lifestyle. The region is separated from Sydney by the Royal National Park and Heathcote National Park with a diverse range of beaches located along the coastline. The economy is underpinned by a strong manufacturing sector and Port Kembla, which is one of NSWâ&#x20AC;&#x2122;s main deep water ports. The University of Wollongong is one of Australiaâ&#x20AC;&#x2122;s leading universities and has established an innovation campus to promote research and innovation with the private sector.

INFRASTRUCTURE INVESTMENT The South Coast boasts extensive infrastructure and is well connected to Sydney by both road and rail. There are significant infrastructure projects proposed for the South Coast region that will benefit residents. The 201819 NSW budget pledged $1.17 billion to infrastructure within the Illawarra-Shoalhaven region. The NSW Government is also investigating future stages of the F6 extension (not yet funded) that would further improve road connectivity between the Illawarra and Sydney. 01 ALBION PARK RAIL BYPASS (PRINCES MOTORWAY) $630 million

POPULATION GROWTH For the purpose of this assessment, the South Coast region has been defined as the Wollongong and Shellharbour Local Government Areas (LGA). The South Coast population increased from 268,286 in 2011 to 284,941 in 2017. The population of the region is projected to reach over 309,000 by 2026 with the significant population providing the critical mass to support new infrastructure and amenity to service residents. SOUTH COAST POPULATION GROWTH Forecast

Upgrades to signalling systems on the Illawarra and South Coast lines to increase capacity on the line from 20 to 25 trains per hour, enabling more trains to service the growing Illawarra region and reduce travel times. 03 WIN STADIUM $5.4 million Wollongong CBD Shellharbour

Upgrade of the Northern Grandstand at WIN Stadium in Wollongong, to ensure public safety and the continued use of the stand for events.

SHELL COVE Shell Cove is a master planned residential community being developed by Frasers Property and Shellharbour City Council. The suburb is located approximately 110km south of the Sydney CBD and 22 km south of Wollongong. The Shellharbour Junction Train Station provides residents with access to the Sydney CBD via Wollongong. Shell Cove is also situated in close proximity to the Princes Motorway (M1) providing direct connectivity to Sydney and to the south.

The next stage of the Masterplan includes a mixed-use waterfront development around a new Town Centre. Stage 1 of the retail precinct opened in October 2018 is anchored by a Woolworths supermarket, as well as nine specialty stores. Stage 2 comprising of a mixed-use dining precinct with six restaurants and cafes, two specialities shops and 45 apartments is scheduled to complete in early 2021. Stage 3 comprising of a further 3 retail shops is scheduled for completion by the end of 2019.

The eastern side of the suburb (The Waterfront Precinct) is under construction and will comprise new house, land, medium density and apartments all part of the extensive concept plan for Shell Cove. There have been 17 releases for house and / or land packages within Shell Cove since 2014.

 270-berth marina within a new harbour, A which will be the largest in Southern NSW with direct access to the Pacific Ocean

 n overall yield of approximately 1,500 dwellings A including around 600 luxury apartments with the majority having uninterrupted waterfront views.

A community centre and library for residents.

Urbis research indicates there are no locations in NSW that offer a large marina, ocean beach, parks, town centre, dining precinct and golf course all within walking distance of new house and land.

LIFESTYLE AT THE WATERFRONT Shell Cove offers a relaxed coastal lifestyle amongst natural surroundings. The coastal lifestyle will be further enhanced by the new marina and town centre development at The Waterfront, which will provide a range of additional services and amenities for residents. Key lifestyle amenity comprises:

POPULATION The Shell Cove suburb population has increased significantly from 2011 to 2017 at an average annual growth rate of 5.6%, well above the NSW average. The NSW Department of Planning and Environment projects the Shell Cove population to increase by an average of 200 new residents per year from 2017 to 2031. Shell Cove and the South Coast region has become more affluent with an average annual household income growth of 4.0% and 3.7% respectively over the last ten years. The average household income in Shell Cove increased to $112,040 in 2016, which is 30% above both the South Coast average and the Sydney average. This highlights that households moving into Shell Cove are affluent. The number of people in white collar occupations such as professionals and managers has increased in Shell Cove from 2006 to 2016. In contrast, there has been a decline in the number of people in blue collar occupations, which reflects broader employment trends towards more knowledge-based jobs and an increasing number of people commuting to work in Sydney. The percentage of people with bachelor’s degrees has increased from 13% in 2006 to 19% in 2016. This reflects the growth of the University of Wollongong providing greater opportunities for residents. Shell Cove has attracted aspirational families with over half of all households comprising families with children. This is reflected by 46% of households purchasing their home and the high household incomes, indicating families have moved into the houses with proximity to schools and amenity. We note that the future development of the Waterfront precinct and increased residential density will likely result in a trend towards more retirees and downsizers moving into Shell Cove. SHELL COVE POPULATION GROWTH

Rental yields on houses in Shell Cove and the Wollongong LGA are considerably higher than that of Greater Sydney. HOUSE RENTAL YIELD September 2018

PRICE COMPARISON Shell Cove will provide a wide range of amenity with an offering that is unique within NSW. Urbis research indicates there are no locations in NSW that offer a large marina, ocean beach, parks, town centre, dining precinct and golf course all within walking distance of new house and land. In particular, there is currently no large marina between Sydney and Eden on the south coast of NSW, highlighting the unique positioning of Shell Cove. Buyers have to look interstate to find new residential developments with a similar range of amenity such as North Coogee in Perth and Newport in Brisbane. The map compares the relative pricing of median houses in Shell Cove to four locations in NSW that Urbis considers to have the most similarity to Shell Cove. Nelson Bay in Port Stephens is a similar regional location to Shell Cove though is over a 2.5-hour drive from Sydney (Shell Cove is one hour 40 minutes) and does not have any new land release. The greater distance from Sydney and older housing result in the cheaper house prices though houses have recorded price growth over 10% per annum over the last five years. All the comparison suburbs have recorded average price growth above the Sydney average highlighting the attractiveness of waterfront locations with a marina and amenity. Although these locations share several characteristics, we note that Shell Cove provides a unique combination of amenities unavailable in any other location in NSW. Greenhills Beach is one of the only locations in Sydney offering new house and land within walking distance of a beach (though does not have a marina, town centre or dining precinct). Greenhills Beach has an average house price more than double the Sydney average and has also recorded price growth more than double the Sydney average. This highlights relative affordability of Shell Cove and the strong price growth of new waterfront developments.

This report is dated March 2019 and incorporates information and events up to that date only and excludes any information arising, or event occurring, after that date which may affect the validity of Urbis Pty Ltdâ&#x20AC;&#x2122;s (Urbis) opinion in this report. Urbis prepared this report on the instructions, and for the benefit only, of Frasers Property (Instructing Party) for the purpose of Market Outlook (Purpose) and not for any other purpose or use. To the extent permitted by applicable law, Urbis expressly disclaims all liability, whether direct or indirect, to the Instructing Party which relies or purports to rely on this report for any purpose other than the Purpose, and to any other person which relies or purports to rely on this report for any purpose whatsoever (including the Purpose). In preparing this report, Urbis was required to make judgements which may be affected by unforeseen future events, the likelihood and effects of which are not capable of precise assessment. All surveys, forecasts, projections and recommendations contained in or associated with this report are made in good faith and on the basis of information supplied to Urbis at the date of this report, and upon which Urbis relied. Achievement of the projections and budgets set out in this report will depend, among other things, on the actions of others over which Urbis has no control. In preparing this report, Urbis may rely on or refer to documents in a language other than English, which Urbis may arrange to be translated. Urbis is not responsible for the accuracy or completeness of such translations and disclaims any liability for any statement or opinion made in this report being inaccurate or incomplete arising from such translations. Whilst Urbis has made all reasonable inquiries it believes necessary in preparing this report, it is not responsible for determining the completeness or accuracy of information provided to it. Urbis (including its officers and personnel) is not liable for any errors or omissions, including in information provided by the Instructing Party or another person or upon which Urbis relies, provided that such errors or omissions are not made by Urbis recklessly or in bad faith. This report has been prepared with due care and diligence by Urbis and the statements and opinions given by Urbis in this report are given in good faith and in the reasonable belief that they are correct and not misleading, subject to the limitations above. 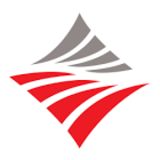