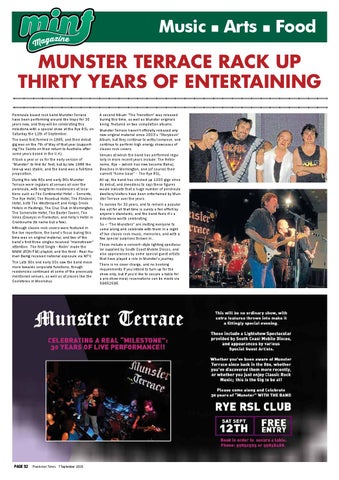 MUNSTER TERRACE RACK UP THIRTY YEARS OF ENTERTAINING Peninsula based rock band Munster Terrace have been performing around the traps for 30 years now, and they will be celebrating this milestone with a special show at the Rye RSL on Saturday the 12th of September. The band first formed in 1985, and their debut gig was on the 7th of May of that year (supporting The Saints on their return to Australia after some years based in the U.K). It took a year or so for the early version of “Munster” to find its’ feet, but by late 1986 the line-up was stable, and the band was a full-time proposition. During the late 80s and early 90s Munster Terrace were regulars at venues all over the peninsula, with long-term residencies at locations such as The Continental Hotel – Sorrento, The Rye Hotel, The Rosebud Hotel, The Flinders Hotel, both The Westernport and Kings Creek Hotels in Hastings, The Cruz Club in Mornington, The Somerville Hotel, The Baxter Tavern, The Vines (Daveys) in Frankston, and Kelly’s Hotel in Cranbourne (to name but a few). Although classic rock covers were featured in the live repertoire, the band’s focus during this time was on original material, and two of the band’s first three singles received “mainstream” attention. The first Single - Rollin’ made the MMM (EON F.M) playlist, and the third - Real Human Being received national exposure via MTV. The Late 90s and early 00s saw the band move more towards corporate functions, though residencies continued at some of the previously mentioned venues, as well as at places like the Coolstores in Mooroduc.

A second Album “The Transition” was released during this time, as well as Munster originals being featured on two compilation albums. Munster Terrace haven’t officially released any new original material since 2003’s “Storybook” Album, but they continue to write/compose, and continue to perform high energy showcases of classic rock covers. Venues at which the band has performed regularly in more recent years include: The Retronome, Rye – (which has now become Baha), Beaches in Mornington, and (of course) their current “home base” - The Rye RSL. All up, the band has clocked up 1200 gigs since its debut, and (needless to say) these figures would indicate that a huge number of peninsula dwellers/visitors have been entertained by Munster Terrace over the years. To survive for 30 years, and to remain a popular live act for all that time is surely a fair effort by anyone’s standards, and the band feels it’s a milestone worth celebrating. So – “The Munsters” are inviting everyone to come along and celebrate with them in a night of live classic rock music, memories, and with a few special surprises thrown in... These include a concert–style lighting spectacular supplied by South Coast Mobile Discos, and also appearances by some special guest artists that have played a role in Munster’s journey. There is no cover charge, and no booking requirements if you intend to turn up for the show only, but if you’d like to secure a table for a pre-show meal; reservations can be made via 59852595.