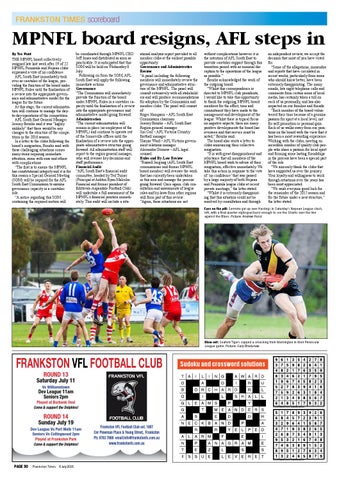 MPNFL board resigns, AFL steps in By Toe Punt THE MPNFL board collectively resigned late last week after 19 of 22 MPNFL Peninsula and Nepean clubs expressed a vote of no confidence. AFL South East immediately took over as caretaker of the league, providing the function of the board under MPNFL Rules until the finalisation of a review into the appropriate governance and administrative model for the league for the future. At this stage, the current administration will continue to manage the dayto-day operations of the competition. AFL South East General Manager Jeremy Bourke said it was “highly unlikely” that there would be any changes to the structure of the competition in the 2016 season. In a letter to the clubs following the board’s resignation, Bourke said with these challenging situations comes many items requiring immediate attention, some with ease and others with complications. “The first is to ensure the MPNFL has constitutional integrity and it is for this reason a Special General Meeting (SGM) will be required for the AFL South East Commission to assume governance capacity in a caretaker role. “A notice regarding this SGM containing the required motion will

be coordinated through MPNFL CEO Jeff Jones and distributed as soon as practicable. It is anticipated that this SGM will be held on Wednesday 8 July. Following on from the SGM, AFL South East will apply the following immediate actions: Governance “The Commission will immediately provide the function of the board under MPNFL Rules in a caretaker capacity until the finalisation of a review into the appropriate governance and administrative model going forward. Administration “The current administration will remain in place (as employees of the MPNFL) and continue to operate out of the Somerville offices until the finalisation of a review into the appropriate administrative structure going forward. All administration staff will report to the region general manager, who will oversee key decisions and staff performance. Financial Audit “AFL South East’s financial audit committee, headed by Ted Turner (Principal at Ashton Ryan Malcolm Financial and former president of Edithvale-Aspendale Football Club) will undertake a full assessment of the MPNFL’s financial position immediately. This audit will include a situ-

ational analysis report provided to all member clubs at the earliest possible opportunity. Governance and Administrative Review “A panel including the following members will immediately review the governance and administrative structure of the MPNFL. The panel will consult extensively with all stakeholders and will produce recommendations for adoption by the Commission and member clubs. The panel will consist of: Roger Hampson – AFL South East Commission chairman Jeremy Bourke – AFL South East Region general manager Jim Cail – AFL Victoria Country football manager Shayne Ward – AFL Victoria government relations manager Alexandra Gronow – AFL legal counsel Rules and By-Law Review “Russell Jacgung (AFL South East commissioner and former MPNFL board member) will oversee the work that has currently been undertaken in this area and manage the process going forward. Once again, club consultation and assessments of league rules and by-laws from other regions will form part of this review. “Again, these situations are not

without complications however it is the intention of AFL South East to provide caretaker support through this transition period with as minimal disruption to the operations of the league as possible.” Bourke acknowledged the work of the outgoing board. “Whilst this correspondence is directed to MPNFL club presidents, I would like to take this opportunity to thank the outgoing MPNFL board members for the effort, time and commitment they have made to the management and development of the league. Whilst there is topical focus on negative aspects, there are many positive developments the board has overseen and that service must be noted,” Bourke said. The board also wrote a letter to clubs announcing their collective resignation. “It is with great disappointment and reluctance that all members of the MPNFL board wish to advise of their resignation, effective immediately. We take this action in response to the vote of ‘no confidence’ that was passed by a large majority of both Nepean and Peninsula league clubs at recent private meetings,” the letter stated. “Whilst it is extremely disappointing that this situation could not be resolved by consultation and through

an independent review, we accept the decision that most of you have voted for. “Some of the allegations, innuendos and reports that have circulated in recent weeks, particularly from some who should know better, have been extremely disappointing. The many emails, late night telephone calls and comments from certain areas of local media, has certainly taken a toll on each of us personally, and has also impacted on our families and friends. “Each member of the board volunteered their time because of a genuine passion for sport at a local level, not for self-promotion or personal gain. Each of us walks away from our positions on the board with the view that it has been a most rewarding experience. Working with the clubs, meeting an incredible number of quality club people who share a passion for local sport and forming some lasting friendships in the process have been a special part of the role. “We sincerely thank the clubs that have supported us over the journey. Your loyalty and willingness to work through situations over the years has been most appreciated. “We wish everyone good luck for the remainder of the 2015 season and for the future under a new structure,” the letter stated.

Eyes on the pill: Sorrento got up over Hastings in Saturday’s Nepean League clash, left, with a final quarter eight-goal burst enough to see the Sharks over the line against the Blues. Picture: Andrew Hurst