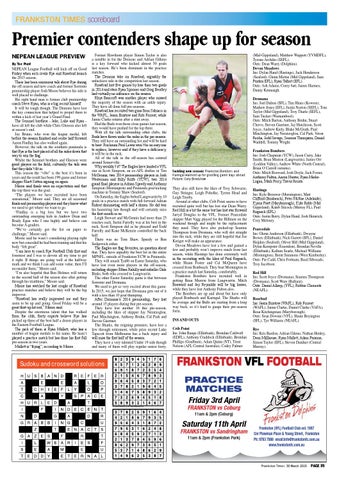 Premier contenders shape up for season NEPEAN LEAGUE PREVIEW By Toe Punt NEPEAN League Football will kick off on Good Friday when arch rivals Rye and Rosebud launch the 2015 season. There has been enormous talk about Rye during the off-season and new coach and former Sorrento premiership player Josh Moore believes his side is well placed to challenge. His right hand man is former club premiership coach Steve Ryan, who is a big recruit himself. It will be tough though. The Demons have lost the key connection that helped to propel them to within a kick of last year’s Grand Final. The Semmel brothers - Jake, Luke and Ryan have all left the club while Chris Gleeson also left at season’s end. Jay Bruno, who won the league medal, left before the season finished and centre half forward Aaron Findlay has also walked again. However, the talk on the southern peninsula is that Rye is the best placed of all the sides down that way to win the flag. Whilst the Semmel brothers and Gleeson were good players on the field, culturally the talk was that they didn’t fit in. This season the “vibe” is the best it’s been in years and the result has been 199-game and former skipper Rhett Sutton signing on again. Moore said finals were an expectation and that the top three was the goal. “The players we have recruited have been sensational,” Moore said. They are all seasoned finals and premiership players and they know what we need to get where we want to go. “Findlay is a big loss but we have two outstanding emerging kids in Andrew Dean and Brady Egan who I rate highly and believe can become A-graders. “We’ve certainly got the list on paper to challenge,” Moore said. Moore said he wasn’t considering playing right now but conceded he had been training and that his body “felt great”. “I am here to coach Rye Football Club first and foremost and I was to devote all my time to get it right. If things are going well at the halfway mark and we think I can add some value, then I’ll reconsider them,” Moore said. “I’m also hopeful that Ben Holmes will return in the second half of the season also after getting through his triathlons,” Moore said. Moore has watched the last couple of Rosebud practice matches and believe they will be the big improver. “Rosebud has really impressed me and they seem to be up and going. Good Friday will be a great first-up hit-out,” Moore said. Despite the enormous talent that has walked from the club, footy experts believe Rye has picked up three of the best half a dozen players in the Eastern Football League. The pick of them is Ryan Mullett, who has a number of league medals to his name. He hasn’t played a practice match but has done his first full pre-season in two years. Mullett is “flying”, according to Moore.

Former Hawthorn player Simon Taylor is also a notable in for the Demons and Adrian Gilleno is a key forward who kicked almost 50 goals last season. He’s been dominant in the practice matches. The Demons take on Rosebud, arguably the unluckiest side in the competition last season. Rosebud lost five games by less than two goals in 2014 and stars Ryan Spooner and Greg Bentley had virtually no influence on the season. Rhys Bancroft was another player who missed the majority of the season with an ankle injury. They have all done full pre-seasons. Rosebud has recruited two guns from Subiaco in the WAFL, Jason Bristow and Rob Forrest, while Jamie Clarke returns after a stint away. Had the Buds won those close games last season, they would have pushed for the top three. With all the talk surrounding other clubs, the Buds have flown under the radar in the pre-season. They still have an outstanding list and will be hard to beat. Ruckman Paul Lewis won’t be an easy one to replace, however and if they have a deficiency, it will be in the ruck. All of the talk in the off-season has centred around Somerville. Why wouldn’t it? The Eagles have landed a VFL star in Scott Simpson, an ex-AFL draftee in Tim McGennis, two 2014 premiership players in Josh Westerman and Billy Rolfe (YCW), two 2014 grand final players in Adrian Speedy and Anthony Simpson (Mornington) and Peninsula goal kicking machine in Tommy Shaw (Seaford). On Saturday, the Eagles belted Langwarrin by 10 goals in a practice match with full forward Adrian Ridout dominating with half a dozen. He did tear his hamstring late though and will certainly miss the first month or so. Leigh Stewart and McGennis had more than 25 touches each, Justin Farrelly was at his best in the ruck, Scott Simpson did as he pleased and Todd Farrelly and Kane McKenzie controlled the back half. There was no Tom Shaw, Speedy or Ben Sedgewick either. The Eagles are flag favorites, no question about that. They have arguably the best list in the entire MPNFL, outside of Frankston YCW in Peninsula. They will smash Tyabb on Easter Saturday, who have lost even more players in the off-season, including skipper Ethan Rahilly and onballer Dale Binks, both who crossed to Langwarrin. The other Easter Saturday game is that between Sorrento and Dromana. We used to get so very excited about this game. In 2015, we just hope that Dromana gets out of it with a less than 10 goal thumping. After Dromana’s 2014 premiership, they lost around 15 players during that pre-season. They have lost another 16 this pre-season, including the likes of skipper Jay Neratzoglou, Paul Minchington, Anthony Bruhn, Cal Park and Steven Gaertner. The Sharks, the reigning premiers, have lost a few through retirement, while prize recruit Luke Tapscott from Melbourne has a back injury and will miss the first half of the season. They have a very talented Under 19 side though and many of them will play regular senior footy.

They also still have the likes of Troy Schwarze, Guy Stringer, Leigh Poholke, Tyrren Head and Leigh Treeby. Around at other clubs, Crib Point seems to have recruited quite well but has lost star Dean Warry. Red Hill is a bit the same but has lost star forward Jarryd Douglas to the VFL. Former Pearcedale skipper Matt Vagg played for the Hillmen on the weekend though and might be the replacement they need. They have also picked-up Seamus Thompson from Dromana, who will slot straight into the ruck, while they are still hopeful that Joe Kreiger will make an appearance. Devon Meadows have lost a few and gained a few and probably won’t improve much from last season, while Hastings has done extremely well in the recruiting with the likes of Paul Rogasch, while Shaun Foster and Cal McQueen have crossed from Bonbeach. They beat Mornington in a practice match last Saturday, comfortably. Frankston Bombers have recruited well in getting Beau Muston from Langwarrin. Mitch Bosward and Jay Reynolds will be big losses, while they have lost Anthony Fulton also. The Bombers are up and about but have only played Bonbeach and Karingal. The Sharks will be average and the Bulls are starting from a long way back, so it’s hard to gauge their pre-season form.