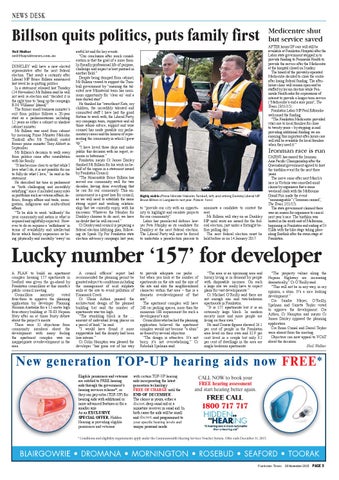 Billson quits politics, puts family first Neil Walker neil@baysidenews.com.au DUNKLEY will have a new elected representative after the next federal election. That result a certainty after Liberal MP Bruce Billson announced last week he is quitting politics. In a statement released last Tuesday (24 November) Mr Billson said he will not seek re-election and “decided it is the right time to ‘hang up the campaign R.M. Williams’ [shoes]”. The former small business minister’s exit from politics follows a 20-year stint as a parliamentarian including 12 years as either a cabinet or shadow cabinet minister. Mr Billson was axed from cabinet by incoming Prime Minister Malcolm Turnbull after Mr Turnbull ousted former prime minister Tony Abbott in September. Mr Billson’s decision to walk away from politics came after consultation with his family. “It has become clear to us that while I love what I do, it is not possible for me to fully do what I love,” he said in the statement. He described his time in parliament as “both challenging and incredibly satisfying” since it included many roles in portfolios such as veteran affairs, defence, foreign affairs and trade, immigration, indigenous and multicultural affairs. “To be able to work ‘selflessly’ for your community and nation is what is required and rightfully expected. However to do so requires a ‘selfishness’ in terms of availability and intellectual focus which family experience as being physically and mentally ‘away’ an

awful lot and for key events. “Our conclusion after much consideration is that the goal of a more family-friendly professional life of purpose, challenge and impact is best pursued in another field.” Despite being dumped from cabinet, Mr Billson vowed to support the Turnbull government by “ensuring the talented new Ministerial team has maximum opportunity for ‘clear air’ and a sure-footed start”. He thanked his “sweetheart Kate, my children, the incredibly talented and committed staff I have had the good fortune to work with, the Liberal Party, my campaign team, supporters and all those whose advice, support and wise counsel has made possible my parliamentary career and the honour of representing the community in which I grew up.” “I have loved these days and make public this decision with no regret, remorse or bitterness.” Frankston mayor Cr James Dooley thanked Mr Billson for his work on behalf of the region in a statement issued by Frankston Council. “The Honourable Bruce Billson has served our community well for two decades, having done everything that he can for our community. This announcement is a great loss for council, as we will need to establish the same strong report and working relationship that we currently enjoy, with his successor. Whatever the Member for Dunkley chooses to do next, we have no doubt that he will succeed.” Cr Dooley said council is preparing a federal election lobbying plan, following its Speak Up For Frankston state election advocacy campaign last year,

Medicentre shut but service saved AFTER hours GP care will still be available at Frankston Hospital after the Labor state government stepped in to provide funding to Peninsula Health to provide the service after the Medicentre at the hospital closed on Sunday. The board of the privately-operated Medicentre decided to close the centre after losing federal funding. The afterhours clinic will remain open and be staffed by locum doctors while Peninsula Health asks for expressions of interest to provide a longer-term service (‘Medicentre’s end a sore point’, The Times 23/11/15). Frankston Labor MP Paul Edbrooke welcomed the funding. “The Frankston Medicentre provided vital care to local families for close to twenty years – by stepping in and providing additional funding we are ensuring this important after-hours care will still be available for local families when they need it.”

to “provide our city with an opportunity to highlight and escalate projects for our community”. Labor has preselected defence lawyer Peta Murphy as its candidate for Dunkley at the next federal election. The Liberal Party will now be forced to undertake a preselection process to

nominate a candidate to contest the seat. Mr Billson will stay on as Dunkley MP until writs are issued for the federal election, just under a fortnight before polling day. The next federal election must be held before or on 14 January 2017.

CAIRNS has snared the Ironman Asia Pacific Championship after the Queensland government agreed to host the triathlon event for the next three years. The move came after next March’s race in Victoria was cancelled amid claims by organisers that a same weekend clash with the Melbourne Grand Prix made the event “unmanageable” (‘Ironman canned’, The Times 2/11/15). The state government claimed there was no reason for organisers to cancel next year’s race. The triathlon was hosted in the south east of Melbourne, beginning in Frankston and ending at St Kilda with the bike stage taking place along Eastlink after the swim stage at Frankston.

Lucky number ‘157’ for developer A PLAN to build an apartment complex housing 157 apartments in Seaford was given the go-ahead by Frankston councillors at this month’s public council meeting. Councillors narrowly voted four-three to approve the planning application by developer Planning Horizon Australia for a 12-metre high four-storey building at 78-83 Nepean Hwy after an at times feisty debate about the project’s merits. There were 32 objections from community members about the development with many feeling the apartment complex was an inappropriate overdevelopment in the area.

A council officers’ report had recommended the planning permit be granted subject to conditions including the management of acid sulphate soils at the site to avoid pollution of Kananook Creek. Cr Glenn Aitken praised the architectural design of the planned building but said the number of apartments was too high. “The stumbling block is the … amount of individual living places on a parcel of land,” he said. “I would have found it more supportable had the density had been less intense.” Cr Colin Hampton was pleased the developer “has gone out of his way

to provide adequate car parks … but when you look at the number of apartments on the site and the size of the site and also the neighbourhood character within that area – this is a dramatic overdevelopment of that site”. The apartment complex will have 248 car parking spaces, more than the minimum 188 requirement for such a development’s size. Councillors who backed the planning application believed the apartment complex would not become “a slum” as feared by several objectors. “The design is attractive. It’s not boxy, it’s not overwhelming,” Cr Rebekah Spelman said.

“The area is an upcoming area and luxury living is in demand by people with disposable incomes. On such a large site we really have to expect plans for vast developments.” Cr Michael O’Reilly said there are not enough one and two-bedroom apartments in Frankston. “It is 157 apartments but it is an extremely large block. In modern society more and more people are living on their own.” He said Census figures showed 26.1 per cent of people in the Frankston area lived on their own and 32.9 per cent lived in a couple but only 3.2 per cent of dwellings in the area are single-bedroom apartments.

“The property values along the Nepean Highway are increasing dramatically,” Cr O’Reilly said. “This will not be in any way, in my opinion, a slum. It’s a nice looking development.” Crs Sandra Mayer, O’Reilly, Spelman and Suzette Tayler voted to approve the development. Crs Aitken, Cr Hampton and mayor Cr James Dooley opposed the planning application. Crs Brian Cunial and Darrel Taylor were absent from the meeting. Objectors can now appeal to VCAT about the decision. Neil Walker