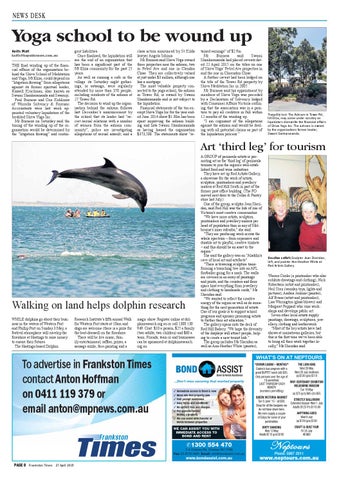 Yoga school to be wound up Keith Platt keith@baysidenews.com.au THE final winding up of the financial affairs of the organisation behind the Shiva School of Meditation and Yoga, Mt Eliza, could depend on “litigation flowing” from allegations against its former spiritual leader, Russell Kruckman, also known as Swami Shankarananda and Swamiji. Paul Burness and Con Kokkinos of Worrells Solvency &amp; Forensic Accountants were last week appointed voluntary liquidators of the troubled Shiva Yoga Inc. Mr Burness on Saturday said the timing of the winding up of the organisation would be determined by the “litigation flowing” and contin-

gent liabilities. Once finalised, the liquidation will see the end of an organisation that has been a significant part of the Mt Eliza community for the past 25 years. As well as running a cafe in the village its Saturday night gatherings, or satsangs, were regularly attended by more than 350 people, including residents of the ashram at 27 Tower Rd. The decision to wind up the organisation behind the ashram follows last December’s announcement by the school that its leader had “secret sexual relations with a number of women from the ashram community”; police are investigating allegations of sexual assault; and a

class action announced by St Kilda lawyer Angela Sdrinis. Mr Burness said Shiva Yoga owned three properties near the ashram, two in Petrel Ave and one in Clendon Close. They are collectively valued at just under $3 million, although one has a mortgage. The most valuable property connected to the yoga school, the ashram in Tower Rd, is owned by Swami Shankarananda and is not subject to the liquidation. Financial statements of the tax-exempt Shiva Yoga Inc for the year ended June 2014 show $1.38m has been spent improving the ashram building and lists Swami Shankarananda as having loaned the organisation $373,508. The statements show “re-

tained earnings” of $2.9m. Mr Burness said Swami Shankarananda had placed caveats dated 22 April 2015 on the titles on one of Shiva Yoga’ Petrel Ave properties in and the one in Clarendon Close. A further caveat had been lodged on the title of the Tower Rd property by Shiva Meditation Inc in 2005. Mr Burness said his appointment by members of Shiva Yoga was preceded by a Declaration of Solvency lodged with Consumer Affairs Victoria outlining that the association was in a position to pay all creditors in full within 12 months of the winding up. “I am cognisant of the allegations against the ashram and would be dealing with all potential claims as part of the liquidation process.”

Traquility lost: The Ashram in Tower Rd, Mt Eliza, may come under scrutiny as liquidators dismantle the financial affairs of Shiva Yoga Inc. The ashram is owned by the organisations former leader, Swami Sankarananda.

Walking on land helps dolphin research WHILE dolphins go about their business in the waters of Western Port and Phillip Port on Sunday 3 May, a festival atmosphere will envelop the foreshore at Hastings to raise money to ensure their futures. The Hastings-based Dolphin

Research Institute’s fifth annual Walk for Western Port starts at 10am and dogs are welcome (there is a prize for the best-dressed) on the foreshore. There will be live music, family entertainment, raffles, prizes, a sausage sizzle, face-painting and a

To advertise in Frankston Times contact Anton Hoffman on 0411 119 379 or email anton@mpnews.com.au Frankston

A GROUP of peninsula artists is promoting art as the &#39;third leg&#39; of peninsula tourism to join the region&#39;s well-established food and wine industries. They have set up Red Artists Gallery, a showcase for the work of artists, sculptors, printmakers and jewellery makers at Red Hill South in part of the former post office building. (The PO moved next door to the Cellar &amp; Pantry store last July.) One of the group, sculptor Jean Sheridan, said Red Hill was the hub of one of Victoria&#39;s most creative communities. &quot;We have more artists, sculptors, printmakers and jewellery makers per head of population than in any of Melbourne&#39;s inner suburbs,&quot; she said. &quot;They are producing work across the whole spectrum – from expensive and durable art to playful, creative trinkets – and this should be an asset to the region.&quot; She said the gallery was an &quot;Aladdin&#39;s cave of local art and artefacts&quot;. &quot;There is towering sculpture transforming a branching tree into an AFL footballer going for a mark. The walls are covered in an array of paintings and prints, and the counters and floor space host everything from jewellery and clothing to handmade cards,&quot; Ms Sheridan said. &quot;We wanted to reflect the creative energy of the region as well as do something for the next generation of artists. One of our goals is to support school programs and sponsor promising artists to further their art education.&quot; The gallery opens onto the deck of Red Hill Bakery. &quot;We hope the diversity of the displays will attract people, helping to create a new tourist hub.&quot; The group includes Ms Sheridan as well as Ann-Heather White (painter),