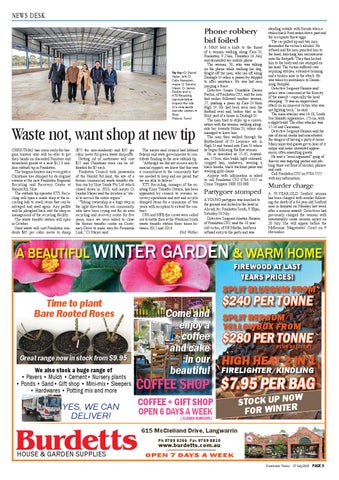 Waste not, want shop at new tip CHRISTMAS has come early for bargain hunters who will be able to get their hands on discarded furniture and household goods at a new $12.3 million rubbish tip in Frankston. The bargain hunters may even grab a Christmas tree dumped by its original owners at the new Frankston Regional Recycling and Recovery Centre at Harold Rd, Skye. The rubbish tip operator KTS Recycling will open a resale shop at the recycling hub to resell items that can be salvaged and used again. Any profits will be ploughed back into the shop or management of the recycling facility. The waste transfer station will open in October. Hard waste will cost Frankston residents $65 per cubic metre to dump

($75 for non-residents) and $35 per cubic metre for green waste drop-offs. Getting rid of mattresses will cost $25 and Christmas trees can be offloaded for $5 each. Frankston Council took possession of the Harold Rd land, the site of a former commercial waste transfer station run by Skye Sands Pty Ltd which closed down in 2010, and mayor Cr Sandra Mayer said the location is “ideal to service the entire region”. “Taking ownership is a huge step in the right direction for our community, who have been crying out for its own recycling and recovery centre for five years, since we were asked to close the former transfer centre on Centenary Drive to make way for Peninsula Link,” Cr Mayer said.

The mayor said council had lobbied federal and state governments to contribute funding to the new rubbish tip. “Although we did not receive any financial support, we knew that this was a commitment to the community that we needed to keep and are proud that we are able to deliver.” KTS Recycling, manager of the existing Knox Transfer Station, has been appointed by council to oversee recovery operations and sort and recycle dumped items for a minimum of two years with an option to extend the contract. CFA and MFB fire crews were called out to battle fires at the Wantirna South waste transfer station three times between 2012 and 2014. Neil Walker

A MAN held a knife to the throat of a woman walking along Kars St, Frankston, 9.25am, Thursday 16 July, and demanded her mobile phone. The woman, 50, who was talking on the phone while walking her dog, fought off the man, who ran off along Denbigh St when a passer-by stopped to offer assistance. He was last seen jumping a fence. Detective Senior Constable Darren Paxton, of Frankston CIU, said the man had earlier followed another woman, 27, pushing a pram up Kars St from High St. He had been seen near the football oval and, before that, in the front yard of a house in Denbigh St. The man tried to strike up a conversation with the woman, walking alongside her towards Nolan St, where she managed to leave him. The man then walked through the Brotherhood of St Laurence site in High St and turned into Kars St where he began following the first woman. He is described as 25-35, Australian, 173cm, slim build, light coloured, cropped hair, unshaven, wearing a black hoodie, black tracksuit pants and wearing gold chains. Anyone with information is asked to call Frankston CIU 9784 5555 or Crime Stoppers 1800 333 000.

Partygoer stomped A YOUNG partygoer was knocked to the ground and kicked in the head in Alicudi Av, Frankston South, 9.30pm, Saturday 18 July. Detective Sergeant Alastair Hanson, of Frankston CIU, said the 18 year old victim, of Mt Martha, had been refused entry to the party and was

standing outside with friends when a stolen black Ford sedan drove past and the occupants threw eggs. The car pulled up and two men demanded the victim’s alcohol. He refused and the men punched him to the head, knocking him unconscious onto the footpath. They then kicked him to the body and one stomped on his head. The victim suffered cuts requiring stitches, extensive bruising and a broken nose in the attack. He was taken by ambulance to Dandenong Hospital. Detective Sergeant Hanson said police were concerned at the ferocity of the assault – especially the head stomping. “It was an unprovoked attack on an innocent victim who was not fighting back,” he said. The main attacker was 16-18, South Sea Islander appearance, 171cm, with a slight build. The other attacker was 15-16 and Caucasian. Detective Sergeant Hanson said the rise of social media had exacerbated the dangers of having a party at home. Many uninvited guests get to hear of it online and make unwanted appearances, often assaulting guests. He said a “semi-organised” gang of thieves was targeting parties and robbing those out front of alcohol, phones and cash. Call Frankston CIU on 9784 5555 with any information.

Murder charge A 59-YEAR-OLD Seaford woman has been charged with murder following the death of a 64-year-old Seaford man in hospital on Monday last week after a serious assault. Detectives had previously charged the woman with intentionally cause serious injury on 20 July. She will appear before the Melbourne Magistrates’ Court on 9 November.