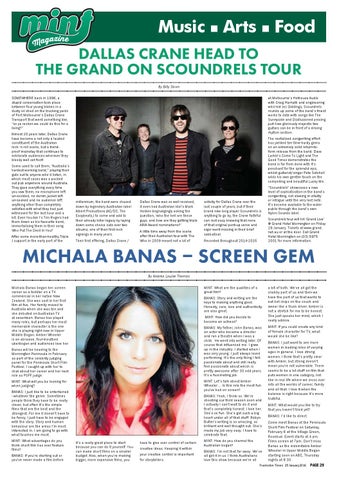 Music  Arts  Food DALLAS CRANE HEAD TO THE GRAND ON SCOUNDRELS TOUR By Billy Dixon SOMEWHERE back in 1996, a stupid conversation took place between four young blokes in a dusty oil shed on the trucking yards of Port Melbourne’s Dallas Crane Transport that went something like, “so ya reckon we could do this for a living?”

at Melbourne’s Hothouse Audio with Craig Harnath and engineering whiz-kid Jez Giddings, Scoundrels rounds up some of the band’s finest works to date with songs like The Sunnyside and Disillusioned proving just how gloriously majestic two guitars can be in front of a driving rhythm section.

Almost 20 years later, Dallas Crane have become a not only a lauded constituent of the Australian rock ‘n roll scene, but a trendproof mainstay that continues to exhilarate audiences wherever they bloody well set foot! Some used to call them, “Australia’s hardest working band,” playing their guts out to anyone who’d listen, in which most cases was a packed out pub anywhere around Australia. They gave everything every time you saw them; no microphone left un-scolded, no denim jacket left un-soaked and no audience left anything other than completely satisfied with what they had just witnessed for the last hour and a bit. Even You Am I’s Tim Rogers had them down as his favourite band, immortalising them in their song Who Put The Devil In You? After some more-than-healthy Triple J support in the early part of the

The revitalised songwriting effort has yielded ten time-hardy gems on an extremely solid return-toform release from the band. Dave Larkin’s Come To Light and The Good Times demonstrates the band is far from done with it’s penchant for the splendid epic, whilst guitarist/singer Pete Satchell adds his own gentler touch on the compelling and beautiful Lucky Me.

millennium, the band were chased down by legendary Australian label Albert Productions (AC/DC, The Easybeats,) to come and add to their already killer legacy by laying down some choice cuts over two albums; one of their first rock signings in many years. Their first offering, Dallas Crane /

Dallas Crane was so well received, it even had Australian Idol’s Mark Holden begrudgingly asking the question, ‘who the hell are these guys, and how are they getting triple ARIA Award nominations?’ A little time away from the scene after their Australian tour with The Who in 2009 meant not a lot of

activity for Dallas Crane over the last couple of years, but if their brand new long player Scoundrels is anything to go by, the Crane faithful can rest easy knowing that none of that original pent-up verve and vigor went missing in their brief sabbatical. Recorded throughout 2014-2015

“Scoundrels” showcases a new level of sophistication in the band’s songwriting, not slowing in vitality or intrigue until the very last note. It’s become available to the wider public through the band’s own Nylon Sounds label. Scoundrels tour will hit ‘Grand Live’ @ Grand Hotel Mornington on Friday 29 January. Tickets at www.grand. net.au or at the door. Call Grand Hotel Mornington on (03) 5975 2001 for more information.

MICHALA BANAS  SCREEN GEM By Andrea Louise Thomas MINT: What are the qualities of a great film?

Michala Banas began her screen career as a toddler on a TV commercial in her native New Zealand. She was cast in her first film at five. Her family moved to Australia when she was ten and she debuted on Australian TV at seventeen. Banas has played many roles, but perhaps her most memorable character is the one she is playing right now in Upper Middle Bogan. Amber Wheeler is an abrasive, foul-mouthed uberbogan and audiences love her.

BANAS: Story and writing are the keys to making anything good. Honesty, care, love and authenticity are also great. MINT: How did you decide to become an actress? BANAS: My father, John Banas, was an actor who became a director and ran a theatre when I was a child. He went into writing later. Of course that influenced me. I grew up in the industry. I started when I was very young. I just always loved performing. It’s the only thing I felt passionate about and still really feel passionate about which is pretty awesome after 30 odd years. It’s a fascinating job.

Banas will be heading to the Mornington Peninsula in February as part of the celebrity judging panel for the Peninsula Short Film Festival. I caught up with her to chat about her career and her next role as PSFF judge.

MINT: Let’s talk about Amber Wheeler…. Is this role the most fun you’ve had on screen?

MINT: What will you be looking for when judging? BANAS: I just like to be entertained - whatever the genre. Sometimes people think they have to be really clever, but often it’s the simple films that are the best and the strongest. For me it doesn’t have to be fancy, I just have to be engaged with the story. Story and human behaviour are the areas I’m most interested in. I am going to go with what touches me most. MINT: What advantages do you think short film has over feature films? BANAS: If you’re starting out or you’ve never made a film before

BANAS: Yeah, I think so. We’re shooting our third season soon and I actually I can’t wait to do it and that’s completely honest. I love her. She’s so fun. She’s got such a big heart under all of that stuff. Robyn Butler’s writing is so amazing, so brilliant and well thought out. She’s made my job very easy. I have to celebrate that. it’s a really great place to start because you can do it yourself. You can make short films on a smaller budget. Also, when you’re making bigger, more expensive films, you

have to give over control of certain creative ideas. Keeping it within your creative control is important for storytellers.

MINT: How do you channel the Australian bogan? BANAS: I’m not that far away. We’ve all got it in us. I think Australians love this show because we’re all

a bit of both. We’ve all got the snobby part of us and then we have the part of us that wants to eat hot chips on the couch and swear like a truck driver. Amber is not a stretch for me to be honest. She just speaks her mind, which I really admire. MINT: If you could create any kind of female character for TV, what would she be like? BANAS: I just want to see more women in leading roles of varying ages in general. I love strong women. I think that’s pretty clear with Amber, but strong doesn’t mean you’re not vulnerable. There seems to be a lot stuff on film that puts women in one category, not like in real life where we cross over into all the worlds of career, family and all that. I love it when the balance is right because it’s more truthful. MINT: What would you like to try that you haven’t tried yet? BANAS: I’d like to direct. Come meet Banas at the Peninsula Short Film Festival on Saturday, February 6 at the Village Green, Rosebud. Event starts at 4 pm. Films screen at 7pm. Don’t miss Banas as the indomitable Amber Wheeler in Upper Middle Bogan starting soon on ABC, Thursday nights at 8:30.