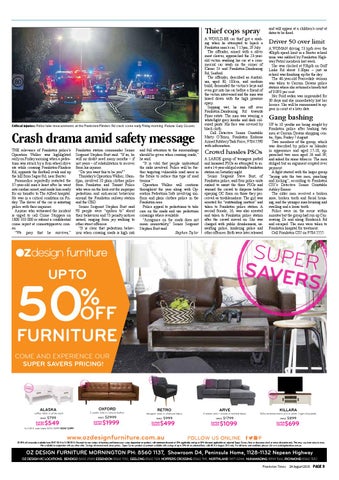 Crash drama amid safety message THE relevance of Frankston police’s Operation Walker was highlighted early on Friday morning when a pedestrian was struck by a four-wheel-drive ute while crossing Frankston-Flinders Rd, opposite the football ovals and up the hill from Sages Rd, near Baxter. Paramedics reportedly restarted the 37-year-old man’s heart after he went into cardiac arrest, and made him ready for air transfer to The Alfred hospital. He was in a critical condition on Friday. The driver of the car is assisting police with their inquiries. Anyone who witnessed the incident is urged to call Crime Stoppers on 1800 333 000 or submit a confidential crime report at crimestoppersvic.com. au “We pray that he survives,”

Frankston station commander Senior Sergeant Stephen Burt said. “If so, he will no doubt need many months – if not years – of rehabilitation to recover from his injuries. “Do you want this to be you?” Thursday’s Operation Walker, 10am6pm, involved 10 plain clothes police from Frankston and Transit Police who were on the look-out for improper pedestrian and anti-social behaviour around the Frankston railway station and the CBD. Senior Sergeant Stephen Burt said 98 people were “spoken to” about their behaviour and 73 penalty notices issued, ranging from jay walking to other street offences. “It is clear that pedestrian behaviour when crossing roads is high risk

and full attention to the surroundings should be given when crossing roads,” he said. “It is vital that people understand the risks involved. Police will be further targeting vulnerable road users in the future to reduce this type of road trauma.” Operation Walker will continue throughout the year along with Operation Pedestrian Safe involving uniform and plain clothes police in the Frankston area. Police appeal to pedestrians to take care on the roads and use pedestrian crossings where available. “Arrogance on the roads does not mean immortality,” Senior Sergeant Stephen Burt said. Stephen Taylor

and will appear at a children’s court at dates to be fixed.

A WOULD-BE car thief got a soaking when he attempted to hijack a Frankston man’s car, 7.15pm, 29 July. The offender, armed with a silver meat cleaver, approached the 23-yearold victim washing his car at a commercial car wash on the corner of Klauer St and Frankston-Dandenong Rd, Seaford. The offender, described as Australian, aged 30, 183cm, and medium build, demanded the victim’s keys and even got into his car before a friend of the victim intervened and the man was hosed down with the high pressure spray. Sopping wet, he ran off over Frankston-Dandenong Rd towards Pines estate. The man was wearing a white/light grey hoodie and dark coloured pants. His face was covered by black cloth. Call Detective Senior Constable Marty O’Brien, Frankston Embona Armed Robbery Task Force, 9784 5590 with information.

A LARGE group of teenagers jostled and harassed PSOs as attempted to arrest a 14-year-old girl outside Frankston station on Saturday night. Senior Sergeant Steve Burt, of Frankston police, said four police units rushed to assist the three PSOs and warned the crowd to disperse before spraying OC foam on those they perceived as troublemakers. The girl was arrested for “outstanding matters” and taken to Frankston police station. A second female, 16, was also arrested and taken to Frankston police station after the crowd moved on. She was charged with public drunkenness, assaulting police, hindering police and other offences. Both were later released

A WOMAN driving 53 kp/h over the 40kp/h speed limit in a Baxter school zone was nabbed by Frankston Highway Patrol members last week. She was clocked at 93kp/h on Golf Links Rd about 3.30pm – just as school was finishing up for the day. The 46-year-old Pearcedale woman was taken to Carrum Downs police station where she returned a breath test of 0.093 per cent. Her Ford sedan was impounded for 30 days and she immediately lost her licence. She will be summonsed to appear in court at a later date.

Gang bashing UP to 10 youths are being sought by Frankston police after bashing two men at Carrum Downs shopping centre, 9pm, Friday 7 August. Two members of the group, which was described by police as Islander in appearance and aged 17-18, approached two men aged 26 and 39, and asked for some tobacco. The men obliged but an argument erupted over payment. A fight started with the larger group “laying into the two men, punching and kicking”, according to Frankston CIU’s Detective Senior Constable Ashley Eames. The older man received a broken nose, broken tooth and facial bruising, and the younger man bruising and swelling and a loose tooth. Police were on the scene within minutes but the group had run up Currawong Dr and along Broderick Rd and escaped. The men were taken to Frankston hospital for treatment. Call Frankston CIU on 9784 5555.

coffee table in white wash WAS

20-50% off storewide available from 28/07/2015 to 31/08/2015. Discount for new orders of furniture and homewares varies dependant on product, with minimum discount of 20% applicable and up to 50% discount applicable on selected Super Savers, floor or clearance stock at stores discretion only. This may vary from store to store. Not available in conjunction with any other offer. Savings off normal retail stores prices. Super Savers product assortment available with savings of up to 50% off on selected lines valid till 31st August 2015 only. For full terms and conditions please visit www.ozdesignfurniture.com.au