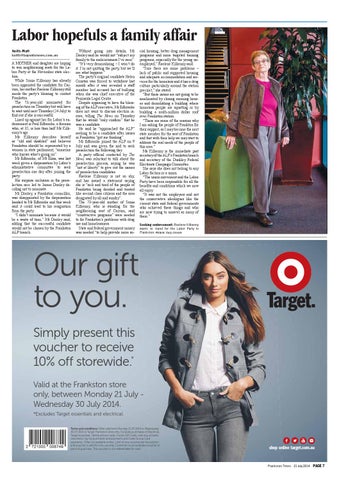 Labor hopefuls a family affair Keith Platt keith@baysidenews.com.au A MOTHER and daughter are hoping to win neighbouring seats for the Labor Party at the November state election. While Sonia Kilkenny has already been appointed the candidate for Carrum, her mother Raelene Kilkenny still needs the party’s blessing to contest Frankston. The 73-year-old nominated for preselection on Thursday but will have to wait until next Thursday (24 July) to find out if she is successful. Lined up against her for Labor’s endorsement is Paul Edbrooke, a fireman who, at 35, is less than half Ms Kilkenny’s age. Ms Kilkenny describes herself as “old and disabled” and believes Frankston should be represented by a woman in state parliament, “someone who knows what’s going on”. Mr Edbrooke, of Mt Eliza, was last week given a dispensation by Labor’s administrative committee to seek preselection one day after joining the party. His surprise inclusion in the preselection race led to James Dooley deciding not to nominate. Mr Dooley, a Frankston councillor, was disappointed by the dispensation handed to Mr Edbrooke and this week said it could lead to his resignation from the party. “I didn’t nominate because it would be a waste of time,” Mr Dooley said, adding that the successful candidate would not be chosen by the Frankston ALP branch.

Without going into details, Mr Dooley said he would not “subject my family to the maliciousness I’ve seen”. “It’s very demoralising – I won’t do it. I’m not quitting the party, but we’ll see what happens.” The party’s original candidate Helen Constas was forced to withdraw last month after it was revealed a staff member had accused her of bullying when she was chief executive of the Peninsula Legal Centre. Despite appearing to have the blessing of the ALP executive, Mr Edbrooke does not want to discuss election issues, telling The News on Thursday that he would “only confirm” that he was a candidate. He said he “approached the ALP” seeking to be a candidate after issues in Frankston “got me thinking”. Mr Edbrooke joined the ALP on 9 July and was given the nod to seek preselection the following day. A party official contacted by The News was reluctant to talk about the preselection process, saying he was “not at liberty” to give out the names of preselection candidates. Raelene Kilkenny is not so shy, and has issued a statement saying she is “sick and tired of the people of Frankston being derided and treated like second class citizens and the area denigrated by all and sundry”. The 73-year-old mother of Sonia Kilkenny, who is standing for the neighbouring seat of Carrum, said “constructive programs” were needed to fix Frankston’s problems with drug use and homelessness. State and federal government money was needed “to help provide more so-

cial housing, better drug management programs and more targeted training programs, especially for the young unemployed,” Raelene Kilkenny said. “Sure there are some problems – lack of public and supported housing and adequate accommodation and services for the homeless and it has a drug culture particularly around the station precinct,” she stated. “But these issues are not going to be ameliorated by closing rooming houses and demolishing a building where homeless people are squatting or by building a multi-million dollar roof over Frankston station. “These are some of the reasons why I am asking the people of Frankton for their support, so I may become the next state member for the seat of Frankston and that with their help we may start to address the real needs of the people of this area.” Ms Kilkenny is the immediate past secretary of the ALP’s Frankston branch and secretary of the Dunkley Federal Electorate Campaign Committee. She says she does not belong to any Labor faction or a union. “The union movement and the Labor Party have been responsible for all the benefits and conditions which we now all enjoy. “It was not the employers and not the conservative ideologues like the current state and federal governments who achieved these things and who are now trying to unravel so many of them.” Seeking endorsement: Raelene Kilkenny wants to stand for the Labor Party in Frankston. Picture: Gary Sissons

Our gift to you. Simply present this voucher to receive 10% off storewide.* Valid at the Frankston store only, between Monday 21 July Wednesday 30 July 2014. *Excludes Target essentials and electrical. Terms and conditions: Offer valid from Monday 21.07.2014 to Wednesday 30.07.2014 at Target Frankston store only. Excludes purchases of Electrical, Target essentials, Telstra phone cards, iTunes Gift Cards, online purchases, rainchecks, lay-by purchases and payments and Coles Group Card payments. Offer not available online. Limit of one voucher per transaction and voucher is valid for one use only. Customer must surrender voucher at point of purchase. This voucher is not redeemable for cash.