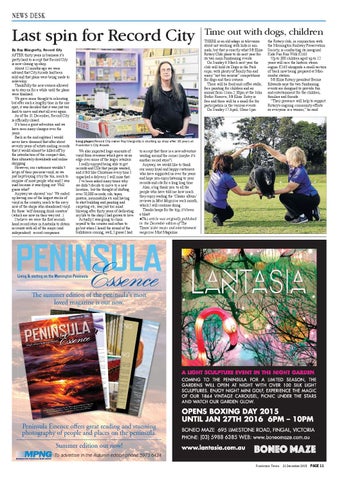 Last spin for Record City By Ray Macgrotty, Record City AFTER thirty years in business it’s pretty hard to accept that Record City is now closing up shop. About 12 months ago we were advised that City Arcade had been sold and that plans were being made to redevelop. Thankfully the new owners allowed us to stay on for a while until the plans were finalised. We gave some thought to relocating but after such a lengthy time in the one spot, it was decided that it was just too hard to move and start all over again. As of the 31 December, Record City is officially closed. It’s been a great adventure and we have seen many changes over the years. Back in the mid eighties I would never have dreamed that after about seventy years of artists making records that it would almost be killed off by the introduction of the compact disc, then ultimately downloads and online shopping . However, our customers wouldn’t let go of their precious vinyl, so we just kept buying it by the ton, much to surprise of most people who said I was mad because it was dying out. Well guess what? Anyway we showed ’em! We ended up having one of the largest stocks of vinyl in the country, much to the envy now of the shops who abandoned vinyl for those ‘self draining drink coasters’ (which are now on their way out...) I believe we were the first secondhand record store in Australia to obtain accounts with all of the major (and independent) record companies.

Time out with dogs, children THERE is an old adage in television about not working with kids or animals, but that is exactly what Mt Eliza Rotary Club plans to do next year for its two main fundraising events. On Sunday 6 March next year the club will hold its Dogs in the Park expo, with plenty of family fun and many “not too serious” competitions for dogs and their owners. There will be food and coffee stalls, face painting for children and an animal farm 11am-2.30pm at the John Butler Reserve, Mt Eliza. Entry is free and there will be a small fee for participation in the various events. On Sunday 17 April, 10am-1pm

the Rotary club, in conjunction with the Mornington Railway Preservation Society, is conducting its inaugural Kids Fun Run With K163. Up to 300 children aged up to 12 years will race the historic steam engine K163 alongside a small section of track now being prepared at Moorooduc station. Mt Eliza Rotary president Bernie Edwards says the two fundraising events are designed to provide fun and entertainment for the children, families and friends. “Their presence will help to support Rotary&#39;s ongoing community efforts so everyone is a winner,” he said.

We also imported huge amounts of vinyl from overseas which gave us an edge over some of the larger retailers. I really enjoyed being able to get records and CDs that people wanted, and it felt like Christmas every time I unpacked a delivery. I will miss that. I’ve been asked many times why we didn’t decide to move to a new location, but the thought of shifting over 50,000 records, cds, tapes, posters, memorabilia etc and having to start building and painting and carpeting etc, was just too mind blowing after thirty years of dedicating my life to the shop I had grown to love. Actually I was going to chain myself to the counter and refuse to go but when I heard the sound of the bulldozers coming, well, I guess I had

to accept that there is a new adventure waiting around the corner (maybe it’s another record store?) Anyway, we would like to thank our many loyal and happy customers who have supported us over the years and hope you enjoy listening to your records and cds for a long long time. Also, a big thank you to all the people who have told me how much they enjoy reading the ‘Classic album’ reviews in Mint Magazine each month, which I will continue doing. Thanks heaps for the trip, it’s been a blast! This article was originally published in the December edition of The Times’ sister music and entertainment magazine Mint Magazine.

The summer edition of the peninsula&#39;s most loved magazine is out now. 15/16

passed off as a reason why they couldn’t bee Viewed up close, there’s no a variety of in supplying agapanthus in station. nursery that does brisk business s varies multi-levelled space are a giveaway recognised by various authoritie (maybe the alien-like flowers colours (the number of species hundreds). Again, this plant is invasive on. hybrids are numbered in the and competiti any cultivars across 10; to climbs six and from clambers By purely on their here) and ace it occupiesMelissa Walsh Pho plants that surviveWith out but, once again, the space tos: Jar Another one of the many attractive a flower. fascination bees and honeyeaters seek it Thefor it, or passion ryd Bra passionfru ductivee plant. productiv banana more the is vo o invasive, less to a all thingsg to looks rather than usefulness in the garden could be devoted do with somethin from our but its flowers look like beau does have somee uses, often ith the summer tiful peninsul Its fruit, as such, is meagre, season upo it appears the passion flower However, all thi sleep alming, calming, a, its tent or car ngs holiday. Instea n us, it’s time to Peninsula Esseturning up as an ingredient in herbal remedies for outer space. think nce ava d off setting n, Meliss effects. Photographer, new cra and muscle spasm relieving a Walsh up that Yaninducing discov old ni, elements of ze out there cal oveers rs there’s led “GLA are seen by some as having spent the better Thehas a whole mfy que Holy MPING” ng theCo part ofodd shaped flowers as the pointed leaves representing en-sized . can beds wit 20 years capturinChristian symbolism, such dle s, faithful 10 bar h electric fridges, rug g the used on Christ; 10 petals, norma blankets, s and boo ever-changing Lance; tendrils being the whips lly fair s. asso thorns. y lights, ks are not ciate wit coastline, and the flower’s radial filaments the crown of this and h campin words you more on including won apostles; g but Ha would he passion your glam ppy Glamp derful theme Spaniards know the ping holida er offe Wakin off rs all e in Krone g up watercrafts. In keeping with this Christian thorn), the Germans Christusstus-Kron y. the perfectnee the morning in flower as espina de Cristo (Christ’s a lux orn-Kron blend of and Dorn-Kro EOS, Strauss (Christ’s bouquet) nature and urious setting give whole glam Christusunder one roof, including brands crown), leading ve (Christ’s the all s “My fascination gl glam comfort ping phe We stock and explain ampers nomena Skechers &amp; More. for Alegria, boa thorns). of is Earthies, ts (crown Ha goi s Reiker, wh ppy Glato Planet, ng wild. y the has resu returns mper star ltedand in a large is seen as a clock, but in India work, school ted when husband &amp; childrens fashion, Rye girl, Jess In Israel and Greece the flower Scott, dec varietyhelp Catering for womens, mens ided to buy you. ercr of wat iee Curtis-G blue and circular layout. aft Gri comfort, larger sizes; we can an Airstre riffiths, “We used of religion because of its Krishna ths, and sports footwear. Orthotic, am. photos from anchesthe Airstre branches andour their way to the upper am for eve it would match your shoes of handbags topeni But when you these vines weaving nts and pro ustbeknow ideal for you just nsul Plus we have a beautiful range the lawn, e.bod a’s through up wee mo two Melbourn off of creeping side tion ken this from ies d and hol s but dec trees or its tendrils of bridal footwear of there,” say oof. id ided iday hire we have the largest range there’s the alien proof. water, Port Phil flowering s Jessie. , and it has lipthis is an evasive invader. And when it flowers, That was taken e two years Bay and Western ago and now full time Port business, the couple Bay,” says Yan with Jessie ma have made ni. “During rketing and Scott doing a lot this their of thee ma i organising summer these nual labo Working bookings, bays ur and together as wel fill up with a colo l as is not a pro décor. actually me blem for t at work collection of wat urful the young several yea couple, wh “We hav rs ago. ercraft of e pretty o all shap much alw *offer expires 29/2/16 different,” es and ays wo specials sizes.” excludes says the mo Off* your purchase ther of two rked together, so Present this ad for 10% “Now wh this is no . en we go on family Airstream OUSE (EST 1988) or tent,” hol BAYSIDE SHOE WAREH idays we she says wit go in styl 80 | PE PH 9785 1887 h a laugh. e in the NINSULA Pde) SEAFORD (cnr Clovelley

Have you visited Bayside Shoe Warehouse?

Peninsula Essence oﬀers great reading and stunning photography of people and places on the peninsula. Summer edition out now! To advertise in the Autumn edition phone 5973 6424 Frankston Times 21 December 2015