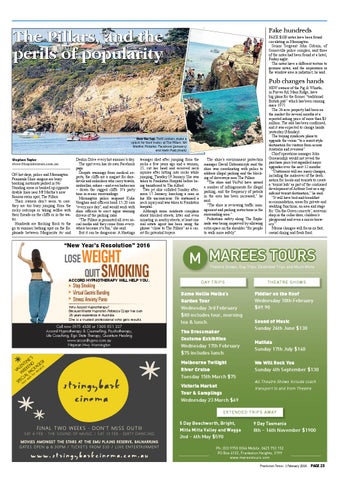 The Pillars, and the perils of popularity

FAKE $100 notes have been found circulating in Mornington. Senior Sergeant John Coburn, of Somerville police complex, said three of the notes had been found at a hotel, Friday night. The notes have a different texture to genuine notes, and the impression in the window area is indistinct, he said.

Over the top: Thrill seekers make a splash for their mates at The Pillars, Mt Martha. Pictures: Facebook (jumpers) and Keith Platt (main)

Stephen Taylor steve@baysidenews.com.au ON hot days, police and Mornington Peninsula Shire rangers are busy booking motorists parked in No Standing areas or banked up opposite double lines near Mt Martha’s now famous swim spot, The Pillars. Their owners don’t seem to care: they are too busy jumping from the rocky outcrops or taking selfies with their friends on the cliffs or in the water. Hundreds are flocking flock to the go to summer bathing spot on the Esplanade between Marguerita Av and

Deakin Drive every hot summer’s day. The spot even has its own Facebook page. Despite warnings from medical experts, the cliffs are a magnet for daredevils and onlookers who carry towels, umbrellas, eskies – and even barbecues – down the rugged cliffs. It’s party time in scenic surroundings. Mornington police sergeant Kylie Vaughan said officers book 15-20 cars “every nice day”, and would work with shire officers to erect signs warning drivers of the parking risks. “The Pillars is promoted all over social media and they come from everywhere because it’s fun,” she said. But it can be dangerous: A Hastings

teenager died after jumping from the rocks a few years ago and a woman, 25, cut her head and received neck injuries after hitting into rocks while jumping, Tuesday 19 January. She was taken to Frankston Hospital before being transferred to The Alfred. Two jet skis collided Sunday afternoon 17 January, knocking a man in his 30s unconscious. He sustained a neck injury and was taken to Frankston hospital. Although some residents complain about blocked streets, litter and even urinating in nearby streets, at least one real estate agent has been using the phrase “close to The Pillars” as a carrot for potential buyers.

LOSE WEIGHT QUIT SMOKING ACCORD HYPNOTHERAPY WILL HELP YOU.

Why Accord Hypnotherapy? Because Master Hypnotist, Rebecca Czajor has over 25 years experience in Australia.

The shire’s environment protection manager David Dobroszczyk said the shire was coordinating with police to address illegal parking and the blocking of driveways near The Pillars. “The shire and VicPol have issued a number of infringements for illegal parking, and the frequency of patrols in the area has been increased,” he said. “The shire is reviewing traffic management and parking restrictions in the surrounding area.” Pedestrian safety along The Esplanade was being improved by allowing extra space on the shoulder “for people to walk more safely”.

NEW owners of the Pig &amp; Whistle, in Purves Rd, Main Ridge, have big plans for the former “traditional British pub” which has been running since 1975. The 26-acre property had been on the market for several months at a reported asking price of more than $3 million. The sale has been confirmed, and it was expected to change hands yesterday (Monday). The buying syndicate plans to upgrade the venue “to a resort-style destination for visitors from across Australia and overseas”. Chief operations manager John Groenendijk would not reveal the purchase price but signalled major upgrades over the next 12 months: “Customers will see many changes, including the makeover of the destination for locals and tourists to create a ‘tourist hub’ as part of the continued development of Arthurs Seat as a significant tourist destination,” he said. “It will have bed-and-breakfast accommodation, areas for private and wedding functions, an area and stage for ‘On-the-Green concerts’, souvenir shop in the cellar door, children’s playground and even a micro-brewery.” Menus changes will focus on fast, casual dining and fresh food.

Fiddler on the Roof Wednesday 10th February $89.90 Sound of Music Sunday 26th June $130 Matilda Sunday 17th July $140 We Will Rock You Sunday 4th September $130 All Theatre Shows Include coach transport to and from Theatre.