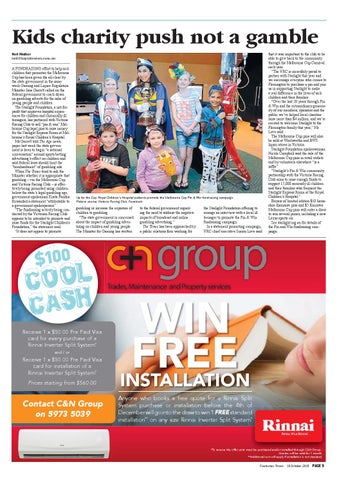 Kids charity push not a gamble Neil Walker neil@baysidenews.com.au A FUNDRAISING effort to help sick children that promotes the Melbourne Cup has been given the all-clear by the state government in the same week Gaming and Liquor Regulation Minister Jane Garrett called on the federal government to crack down on gambling adverts for the sake of young people and children. The Starlight Foundation, a not-forprofit that improves hospital experiences for children and chronically ill teenagers, has partnered with Victoria Racing Club to sell “pin &amp; win” Melbourne Cup lapel pins to raise money for the Starlight Express Room at Melbourne’s Royal Children’s Hospital. Ms Garrett told The Age newspaper last week the state government is keen to begin “a national conversation” around sports betting advertising’s effect on children and said federal laws should limit the “bombardment” of gambling ads. When The Times tried to ask the Minister whether it is appropriate that gambling – via the Melbourne Cup and Victoria Racing Club – is effectively being promoted using children below the state’s legal gambling age, government spokesman Kosta Pandos forwarded a statement “attributable to a government spokesperson”. “The fundraising activity being conducted by the Victorian Racing Club appears to be intended to promote and raise funds for the Starlight Children&#39;s Foundation,” the statement read. “It does not appear to promote

gambling or increase the exposure of children to gambling. “The state government is concerned about the impact of gambling advertising on children and young people. The Minister for Gaming has written

to the federal government regarding the need to address the negative impacts of broadcast and online gambling advertising.” The Times has been approached by a public relations firm working for

that it was important to the club to be able to give back to the community through the Melbourne Cup Carnival each year. “The VRC is incredibly proud to partner with Starlight this year and we encourage everyone who comes to Flemington to purchase a pin and join us in supporting Starlight to make a real difference in the lives of sick children and their families. “Over the last 20 years through Pin &amp; Win and the extraordinary generosity of our members, sponsors and the public we’ve helped local charities raise more than $4 million, and we’re excited to welcome Starlight to the Flemington family this year,” Mr Love said. The Melbourne Cup pins will also be sold at Woolworths and BWS liquor stores in Victoria. Starlight Foundation spokeswoman Nicole Campbell said the sale of the Melbourne Cup pins in retail outlets and by volunteers elsewhere “is a raffle”. “Starlight’s Pin &amp; Win community partnership with the Victoria Racing Club aims to raise enough funds to support 15,000 seriously ill children and their families who frequent the Starlight Express Room at the Royal Children’s Hospital.” Buyers of limited edition $10 horseshoe diamante pins and $5 Emirates Melbourne Cup pins will enter a draw to win several prizes, including a new Lexus sports car. See starlight.org.au for details of the Pin and Win fundraising campaign.

*To receive this offer units must be purchased and/or installed through C&amp;N Group. Quotes will be valid for 1 month **Additional cost will apply if installation is not standard