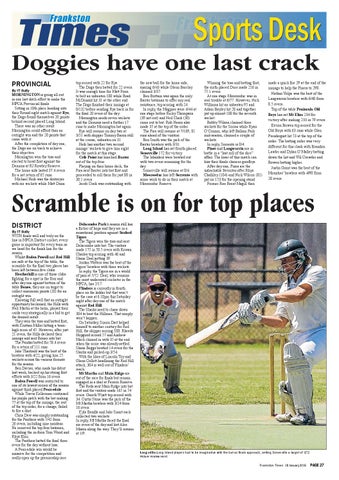 Doggies have one last crack PROVINCIAL By IT Gully MORNINGTON is going all out in one last ditch effort to make the MPCA Provincial finals. Sitting in 10th place heading into their Round eight match against Rye, the Dogs found themselves 20 points behind second placed Long Island. There was no other result Mornington could afford than an outright win and the 20 points that came with it. After the completion of day one, the Dogs are on track to achieve their objective. Mornington won the toss and elected to bowl first against the Demons at RJ Rowley Reserve. The home side lasted 37.4 overs for a net return of 65 runs. Michael Heib was the destroyer with six wickets while Matt Dunn

top scored with 22 for Rye. The Dogs then batted for 22 overs. It was enough time for Matt Foon to belt an unbeaten 100 while Brad McDonald hit 31 at the other end. The Dogs finished their innings at 0/132 before sending Rye back in for the final 20 overs of the day. Mornington needs seven wickets and the Demons need a further 17 runs to make Mornington bat again. Rye will resume on day two at 3/51 with skipper Tommy Baron still at the crease, unbeaten on 31. Heib has another two second innings’ wickets to give him eight for the match at this stage. Crib Point has knocked Baxter out of the top four. Playing on their home deck, the Pies sent Baxter into bat first and proceeded to roll them for just 88 in 30.1 overs. Jacob Cook was outstanding with

the new ball for the home side, snaring 6/43 while Glenn Barclay claimed 3/37. Ben Brittain was again the only Baxter batsman to offer any real resistance, top scoring with 24. In reply, the Magpies were 4/44 at one stage before Ricky Thompson (39 not out) and Neil Clark (30) came out to bat. Rob Hearn also made 35 at the top of the order. The Pies will resume at 7/169, 81 runs ahead of the visitors. Ben Smith was the pick of the Baxter bowlers with 3/31. Long Island has set fourth-placed Somerville 172 for victory. The Islanders were bowled out with two overs remaining for the day. Somerville will resume at 0/4. Moorooduc has left Sorrento with some work to do in their match at Moorooduc Reserve.

Winning the toss and batting first, the sixth-placed Ducs made 216 in 75.1 overs. At one stage Moorooduc was in real trouble at 6/77. However, Nick Williams hit an unbeaten 95 and Adam Bayley hit 28 and together put up almost 100 for the seventh wicket. Bobby Wilson claimed three wickets for the Sorras while Ryan O’Connor, who left Ballam Park mid-season, claimed a couple of wickets. In reply, Sorrento is 0/4. Pines and Langwarrin are in battle in a “last roll of the dice” affair. The loser of this match can kiss their finals chances goodbye. After day one, Pines are the unbackable favorites after Rhys Chalkley (104) and Nick Wilcox (81) put on 153 for the opening stand. Former Roo Brent Magill then

made a quick fire 29 at the end of the innings to help the Piners to 298. Nathan Volpe was the best of the Langwarrin bowlers with 6/48 from 8.5 overs. Top of the table Peninsula Old Boys has set Mt Eliza 234 for victory after making 233 in 79 overs. Eivion Bowen top scored for the Old Boys with 63 runs while Glen Prendergast hit 53 at the top of the order. The batting order was very different for this clash with Brandon Lawler and Dylan O’Malley batting down the list and Wil Crowder and Bowen batting higher. Justin Grant was the best of the Mounties’ bowlers with 4/90 from 28 overs.

Scramble is on for top places DISTRICT By IT Gully WITH finals well and truly on the line in MPCA District cricket, every game is important for every team as we head for the finish line for the season. Whilst Baden Powell and Red Hill are safe at the top of the table, the scramble for the final two places has been left between five clubs. Heatherhill is one of those clubs fighting for a spot in the four and after day one against bottom of the table Boneo, they are on target to collect maximum points (20) for an outright win. Knowing full well that an outright opportunity beckoned, the Hills with Neil Martin at the helm, played their cards very strategically in a bid to get the desired result. They won the toss and batted first, with Kristian Miller hitting a teamhigh score of 45. However, after just 21 overs, the Hills declared their innings and sent Boneo into bat. The Pandas batted for 58.4 overs for a return of 111 runs. Jake Theobald was the best of the bowlers with 4/22, giving him 25 wickets across the various formats for the season. Ben Davies, who made his debut last week, backed up his strong first efforts with 3/22 from 16 overs. Baden Powell was restricted to one of its lowest scores of the season against third-placed Pearcedale. While Travis Kellerman continued his purple patch with the bat making 77 at the top of the innings, the rest of the top order, for a change, failed to fire a shot. Chris Dew was simply outstanding for the Panthers with 7/42 from 26 overs, including nine maidens. He removed the top four batsmen, including the in-form Tom Wood and Rhys Elmi. The Panthers batted the final three overs for the day without loss. A Pearcedale win would be massive for the competition and really open up the premiership race.

Delacombe Park’s season still has a flicker of hope and they are in a sensational position against Seaford Tigers. The Tigers won the toss and sent Delacombe into bat. The visitors made 175 in 50.5 overs with Rowan Charles top scoring with 46 and Shane Deal getting 39. Jordan Watters was the best of the Tigers’ bowlers with three wickets. In reply, the Tigers are in a world of pain at 5/72. Deal, who remains the most underrated cricketer in the MPCA, has 2/17. Flinders is currently in fourth place on the ladder but that won’t be the case at 6.10pm this Saturday night after day one of the match against Red Hill. The Sharks need to chase down 304 to beat the Hillmen. That simply won’t happen. On Saturday, Simon Dart helped himself to another century for Red Hill, the skipper scoring 108. Rheede Hopgood scored 57 and Andrew Mock chimed in with 35 at the end when the score was already settled. Shane Beggs bowled 14 overs for the Sharks and picked-up 3/54. With the likes of Lincoln Toy and Glenn Collett headlining the Red Hill attack, 304 is well out of Flinders’ reach. Mt Martha and Main Ridge are out of the race for finals but remain engaged in a duel at Ferrero Reserve. The Reds sent Main Ridge into bat first and the visitors made 165 in 74 overs. Gareth Wyatt top scored with 34. Curtis Stone was the pick of the Mt Martha bowlers with 3/24 from 16 overs. Kyle Bendle and Jake Smart each collected two wickets. In reply, Mt Martha faced the final six overs of the day and lost Alex Mason along the way. They’ll resume at 1/9.

Long odds: Long Island players had to be imaginative with the bat as finals approach, setting Somerville a target of 172. Picture: Andrew Hurst