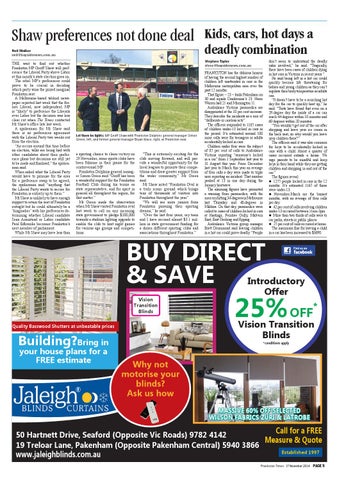 Neil Walker neil@baysidenews.com.au THE wait to find out whether Frankston MP Geoff Shaw will preference the Liberal Party above Labor at this month’s state election goes on. The rebel MP’s preferences could prove to be crucial in deciding which party wins the prized marginal Frankston seat. A Melbourne-based tabloid newspaper reported last week that the former Liberal, now independent, MP is “likely” to preference the Liberals over Labor but the decision was less clear cut when The Times contacted Mr Shaw’s office late last week. A spokesman for Mr Shaw said there is no preferences agreement with the Liberal Party two weeks out from the election. “As occurs around this time before an election, talks are being had with other candidates about their preference plans but decisions are still yet to be made and finalised,” the spokesman said. When asked what the Liberal Party would have to promise for the area for a preference swap to be agreed, the spokesman said “anything that the Liberal Party wants to secure for Frankston is entirely up to them.” Mr Shaw is unlikely to have enough support to retain the seat of Frankston outright but he could ultimately be a ‘kingmaker’ with his preferences determining whether Liberal candidate Sean Armistead or Labor candidate Paul Edbrooke becomes Frankston’s next member of parliament. While Mr Shaw may have less than

a sporting chance to claim victory on 29 November, some sports clubs have been fulsome in their praise for the controversial MP. Frankston Dolphins general manager Simon Green said “Geoff has been a wonderful support for the Frankston Football Club during his tenure as state representative, and for sport in general all throughout the region, for that matter.” Mr Green made the observation when Mr Shaw visited Frankston oval last week to call on any incoming state government to pledge $200,000 towards a stadium lighting upgrade to enable the club to host night games for various age groups and competitions.

“This is extremely exciting for the club moving forward, and will provide a wonderful opportunity for the local leagues to promote their competitions and draw greater support from the wider community,” Mr Green said. Mr Shaw noted “Frankston Oval is a truly iconic ground which brings tens of thousands of visitors into Frankston throughout the year”. “We will see more juniors from Frankston pursuing their sporting dreams,” he said. “Over the last four years, my team and I have secured almost $3.1 million in state government funding for a dozen different sporting clubs and associations throughout Frankston.”

don’t seem to understand the deadly risks involved,” he said. “Tragically, there have been cases of children dying in hot cars in Victoria in recent years.” He said being left in a hot car could quickly become life threatening for babies and young children as they can’t regulate their body temperature as adults can. “It doesn’t have to be a scorching hot day for the car to quickly heat up,” he said. “Tests have found that even on a 29-degree day the inside of a car can reach 44 degrees within 10 minutes and 60 degrees within 20 minutes. “You wouldn’t get out of the car after shopping and leave your ice cream in the back seat, so why would you leave your children there?” The officers said it was also common for keys to be accidentally locked in cars with a child. About a quarter of cases occurred outside a house. We urge parents to be mindful and keep keys in their hand while they are getting children and shopping in and out of the car.” The figures reveal:  1275 people locked in cars in the 12 months. It’s estimated 1165 of those were under-13.  November-March are the busiest months, with an average of four calls per day  42 per cent of calls involving children under-13 occurred between 11am-3pm  More than two thirds of calls were to car parks, streets or public places  25 per cent of calls occurred at home. The maximum fine for leaving a child in a car has been increased to $3690.

FRANKSTON has the dubious honour of having the second highest number of children left unattended in cars in the Melbourne metropolitan area over the past 12 months. That figure – 23 – trails Pakenham on 30 and equals Cranbourne’s 23. Narre Warren had 21 and Mornington 11. Ambulance Victoria paramedics are disappointed at the 10 per cent increase. They describe the incidents as a mix of “deliberate or careless acts”. The officers responded to 1165 cases of children under-13 locked in cars in the period. It’s estimated around 100 more calls were for teenagers or adults accidentally locked in cars. Children under four were the subject of 85 per cent of calls to Ambulance Victoria reporting “someone’s locked in a car” from 1 September last year to 31 August this year. From December last year to March this year an average of four calls a day were made to triple zero reporting an incident. That number peaked at 13 in one day during the January heatwave. The alarming figures have promoted a warning from paramedics, with the mercury hitting 34-degrees in Melbourne last Thursday and 40-degrees in Mildura. On that day, paramedics were called to cases of children locked in cars at Hastings, Ferntree Gully, Malvern East, East Geelong and Epping. Ambulance Victoria group manager Brett Drummond said leaving children in a hot car could prove deadly. “People

your house plans for a FREE estimate

Why not motorise your blinds? Ask us how MASSIVE 60% OFF SELECTED WILSON FABRICS ZURI &amp; LATROBE