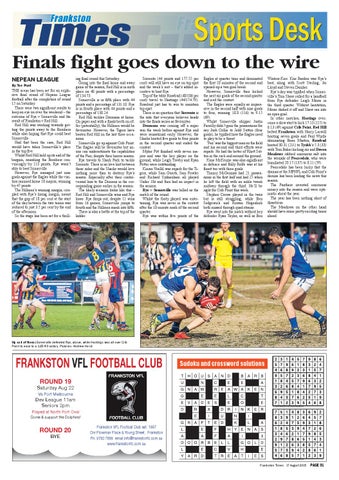 Finals fight goes down to the wire NEPEAN LEAGUE By Toe Punt THE scene has been set for an explosive final round of Nepean League football after the completion of round 15 on Saturday. There were two significant results to keep an eye on over the weekend – the outcome of Rye v Somerville and the result of Frankston v Red Hill. Red Hill was working towards getting the points away to the Bombers while also hoping that Rye could beat Somerville. Had that been the case, Red Hill would have taken Somerville’s place in the top five. Whilst Red Hill held up its end of the bargain, smashing the Bombers convincingly by 113 points, Rye wasn’t able to beat Somerville. However, Rye managed just nine goals against the Eagles while the visitors rammed home 18 majors, winning by 47 points. The Hillmen’s winning margin, coupled with Rye’s losing margin, meant that the gap of 18 per cent at the start of the day between the two teams was reduced to just 3.5 per cent by the end of the afternoon. So the stage has been set for a thrill-

ing final round this Saturday. Going into the final home and away game of the season, Red Hill is in sixth place on 40 points with a percentage of 134.73. Somerville is in fifth place with 44 points and a percentage of 131.10. Rye is in fourth place with 44 points and a percentage of 138.24. Red Hill tackles Dromana at home. On paper and with a finals berth on offer (potentially), the Hillmen would be favourites. However, the Tigers have beaten Red Hill on the last three occasions. Somerville go up against Crib Point. The Eagles will be favourites but noone can underestimate the capabilities of the Pies, despite their horror season. Rye travels to Shark Park to tackle Sorrento. There is no love lost between these sides and the Sharks would love nothing more than to destroy Rye’s season. Especially after their controversial loss to the Demons in the corresponding game earlier in the season. The likely scenario looks like this – Red Hill and Somerville wins and Rye loses. Rye drops out, despite 11 wins from 16 games, Somerville jumps to fourth and the Hillmen sneak into fifth. There is also a battle at the top of the ladder.

Sorrento (44 points and 177.55 per cent) will still have an eye on top spot and the week’s rest – that’s added incentive to beat Rye. Top of the table Rosebud (48/186 per cent) travel to Hastings (44/174.79). Rosebud just has to win to maintain top spot. There is no question that Sorrento is the side that everyone believes heads into the finals series as favourites. Dromana was coming off a super win the week before against Rye and were sensational early. However, the Sharks booted five goals to four points in the second quarter and ended the contest. Myles Pitt finished with seven majors and was the key player on the ground, while Leigh Treeby and Ryan Potter were outstanding. Kieran Voelkl was superb for the Tigers, while Sam Guerts, Sam Fowler and Richard Sydnenham all played Under 18s and then had an impact in the seniors. Rye v Somerville was billed as the match of the round. Whilst the footy played was entertaining, Rye was never in the contest after the 10-minute mark of the second quarter. Rye was within five points of the

Eagles at quarter time and dominated the first 10 minutes of the second and opened-up a two goal break. However, Somerville then kicked the next six goals of the second quarter and iced the contest. The Eagles were equally as impressive in the second half with nine goals to four, winning 18.8 (116) to 9.15 (69). Whilst Somerville skipper Justin Farrelly didn’t gain the possessions for say Josh Collie to Jedd Sutton (four goals), he typified how the Eagles need to play to be a threat. ‘Faz’ was the biggest man on the field and his second and third efforts were superb. He had the better of Rhett Sutton in the ruck and around the ground. Kane McKenzie was also significant in defence and Billy Rolfe was at his finest too with three goals. Timmy McGenniss had 21 possessions in the first half and had 25 when he left the field with an ankle tweak midway through the third. He’ll be right for Crib Point this week. Stephen Crowe played in the twos but is still struggling, while Ben Sedgewick and Rowan Hogenbirk both missed through quad strains. Rye went into the match without key defender Ryan Taylor, as well as Ben

Winters-Kerr. Kris Bardon was Rye’s best, along with Scott Sterling, Jai Lloyd and Steven Daniher. Rye’s day was typified when Somerville’s Tom Shaw called for a handball from Rye defender Leigh Morse in the third quarter. Without hesitation, Morse dished it off and Shaw ran into an open goal. In other matches, Hastings overcame a slow start to kick 17.13 (115) to 6.13 (49) against Crib Point, Red Hill belted Frankston with Harry Larwill booting seven goals and Paul Wintle dominating Beau Muston, Rosebud booted 30.31 (211) to Tyabb’s 5.3 (33) with Tom Baker kicking six and Devon Meadows rubbed enormous salt into the wounds of Pearcedale, who were humiliated 20.17 (137) to 8.11 (59). Pearcedale has been lucky that the dramas at the MPNFL and Crib Point’s demise has been leading the news this season. The Panthers invested enormous money into the season and were optimistic about the year. The year has been nothing short of disastrous. The Meadows on the other hand should have some pretty exciting times ahead.

Up and at them: Somerville defeated Rye, above, while Hastings was all over Crib Point to ease to a 115-49 victory. Pictures: Andrew Hurst