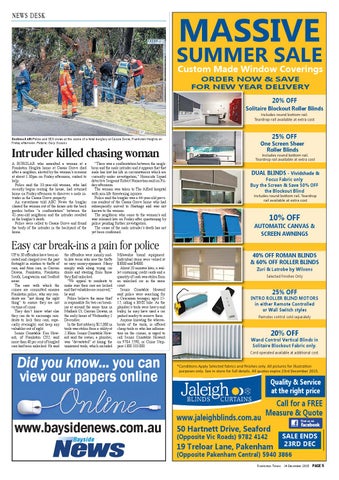 Cordoned off: Police and SES crews at the scene of a fatal burglary at Cassia Grove, Frankston Heights on Friday afternoon. Picture: Gary Sissons

Intruder killed chasing woman A BURGLAR who assaulted a woman at a Frankston Heights home at Cassia Grove died after a neighbor, alerted by the woman’s screams at about 1.30pm on Friday afternoon, rushed to help. Police said the 33-year-old woman, who had recently begun renting the house, had returned home on Friday afternoon to discover a male intruder in the Cassia Grove property. An eyewitness told ABC News the burglar chased the woman out of the house into the back garden before “a confrontation” between the 42-year-old neighbour and the intruder resulted in the burglar’s death. Police were called to Cassia Grove and found the body of the intruder in the backyard of the home.

“There was a confrontation between the neighbour and the male intruder and it appears that that male has lost his life in circumstances which are currently under investigation,” Homicide Squad detective Sergeant Robert Nazaretian said on Friday afternoon. The woman was taken to The Alfred hospital with non-life threatening injuries. Police said the burglar was a 44-year-old previous resident of the Cassia Grove home who had subsequently moved to Hastings and was not known to the woman. The neighbour who came to the woman’s aid was released late on Friday after questioning by police pending further investigation. The cause of the male intruder’s death has not yet been confirmed.

Easy car break-ins a pain for police UP to 30 offenders have been arrested and charged over the past fortnight in relation to thefts of cars, and from cars, in Carrum Downs, Frankston, Frankston South, Langwarrin and Seaford areas. The ease with which the crimes are committed amazes Frankston police, who say residents are “not doing the right thing” to ensure they are not victims of crime. They don’t know what else they can do to encourage residents to lock their cars, especially overnight, and keep any valuables out of sight. Senior Constable Ken Howard, of Frankston CIU, said more than 40 per cent of burgled cars had been unlocked. He said

the offenders were mainly midto-late teens who saw the thefts as easy money-spinners. Many simply walk along trying car doors and stealing from those they find unlocked. “We appeal to residents to make sure their cars are locked and that valuables are removed,” he said. Police believe the same thief is responsible for two car breakins at around the same time in Mudlark Ct, Carrum Downs, in the early hours of Wednesday 2 December. In the first robbery, $15,000 in tools was stolen from a utility at 2.30am. Senior Constable Howard said the owner, a plumber, was “devastated” at losing the uninsured tools, which included

Milwaukie brand equipment. Individual items were valued at $3000 and $4000. About 20 minutes later, a wallet containing credit cards and a quantity of cash was stolen from an unlocked car in the same court. Senior Constable Howard said police were searching for a Caucasian teenager, aged 1517, riding a BMX bike. As the plumber’s tools were heavy and bulky, he may have used a car parked nearby to remove them. Anyone knowing the whereabouts of the tools, is offered cheap tools or who has information on the crimes, is urged to call Senior Constable Howard on 9784 5590, or Crime Stoppers 1300 333 000.