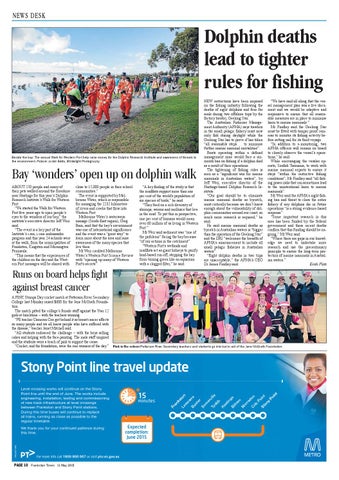 Beside the bay: The annual Walk for Western Port help raise money for the Dolphin Research Institute and awareness of threats to the environment. Picture: Justin Betts, Whitelight Photography

Bay ‘wonders’ open up on dolphin walk ABOUT 250 people and many of their pets walked around the foreshore near Hastings for this year’s Dolphin Research Institute’s Walk for Western Port. “We started the Walk for Western Port five years ago to open people’s eyes to the wonders of our bay,” the institute’s executive director Jeff Weir said. “The event is a key part of the Institute’s i sea, i care ambassador program and this year 24 schools were at the walk, from the municipalities of Frankston, Kingston and Mornington Peninsula. “This means that the experiences of the children on the day and the Western Port messages will be shared with

close to 15,000 people in their school communities.” The event is supported by Melbourne Water, which is responsible for managing the 2232 kilometres of rivers and creeks that flow into Western Port. Melbourne Water’s waterways manage (South-East region), Greg Bain, said that the bay’s environment was one of international significance and the event was a “great way” to learn more about the area and raise awareness of the many species that live there. Mr Weir credited Melbourne Water’s Western Port Science Review with “opening up many of Western Port&#39;s secrets”.

“A key finding of the study is that the mudflats support more than one per cent of the world&#39;s population of six species of birds,” he said. “They feed on a rich diversity of shrimps, worms and molluscs that live in the mud. To put this in perspective, one per cent of humans would mean over 60 million of us living in Western Port.” Mr Weir said sediment was “one of the problems” facing the bay because “of our actions in the catchment”. “Western Port&#39;s wetlands and mudflats act as giant kidneys to purify land-based run-off, stopping the bay from turning green like an aquarium with a clogged filter,” he said.

NEW restrictions have been imposed on the fishing industry following the deaths of eight dolphins and four fur seals during two offshore trips by the factory trawler, Geelong Star. The Australian Fisheries Management Authority (AFMA) says trawlers in the small pelagic fishery must now only fish during daylight while the Geelong Star has to prove if has taken “all reasonable steps … to minimise further marine mammal mortalities”. Boats operating within a defined management zone would face a sixmonth ban on fishing if a dolphin died as a result of their operations. The tightening of fishing rules is seen as a “significant win for marine mammals in Australian waters”, by Jeff Weir, executive director of the Hastings-based Dolphin Research Institute. “Our goal should be to eliminate marine mammal deaths as bycatch, most critically because we don’t know enough about the vulnerability of dolphin communities around our coast, so much more research is required,” he said. He said marine mammal deaths as bycatch in Australian waters is “bigger than the operation of the Geelong Star” and the DRI “welcomes the breadth of AFMA&#39;s announcement to include all small pelagic fisheries in Australian waters”. “Eight dolphin deaths in two trips are unacceptable,” the AFMA’s CEO Dr James Findlay said.

“We have said all along that the vessel management plan was a live document and we would be adaptive and responsive to ensure that all reasonable measures are in place to minimise harm to marine mammals.” Mr Findlay said the Geelong Star must be fitted with tamper proof cameras to monitor its fishing activity before setting sail for its third voyage. “In addition to e-monitoring, two AFMA officers will remain on board to closely observe the vessel’s operations,” he said. While encouraging the vessles operato, Seafish Tasmania, to work with marine mammal experts to ensure it stays “within the restrictive fishing conditions”, Mr Findlay said “all fishing poses risks that can sometimes lead to the unintentional harm to marine mammals”. Mr Weir said the AFMA&#39;s night fishing ban and threat to close the entire fishery if any dolphins die in future operations “is a strong evidence-based response”. “Some important research in this area has been funded by the federal government and these recent deaths confirm that this funding should be ongoing,” Mr Weir said. “Where there are gaps in our knowledge we need to undertake more research and use the precautionary principle to ensure the long-term protection of marine mammals in Australian waters.” Keith Platt

Runs on board helps fight against breast cancer A PINK Stumps Day cricket match at Patterson River Secondary College last Monday raised $600 for the Jane McGrath Foundation. The match pitted the college’s female staff against the Year 12 girls at lunchtime – with the teachers winning. “PE teacher Cameron Cox got behind it as breast cancer affects so many people and we all know people who have suffered with the disease,” teacher Janet Mitchell said. “All students embraced the challenge – with the boys selling cakes and helping with the face-painting. The male staff umpired and the students wore a touch of pink to support the cause. “Cricket, and the foundation, were the real winners of the day.”

Pink is the colour: Patterson River Secondary teachers and students go into bat in aid of the Jane McGrath Foundation.

We thank you for your continued patience during this time.

Level crossing works will continue on the Stony Point line until the end of June. The works include engineering, installation, testing and commissioning of new track infrastructure at level crossings between Frankston and Stony Point stations. During this time buses will continue to replace all trains, running as close as possible to the regular timetable.