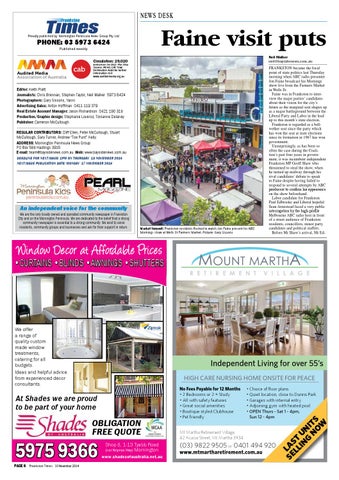 FRANKSTON became the focal point of state politics last Thursday morning when ABC radio presenter Jon Faine broadcast his Mornings show live from the Farmers Market in Wells St. Faine was in Frankston to interview the major parties’ candidates about their vision for the city’s future as the marginal seat shapes up as a major battleground between the Liberal Party and Labor in the lead up to this month’s state election. Frankston is regarded as a bellwether seat since the party which has won the seat at state elections since its formation in 1967 has won government. Unsurprisingly, as has been so often the case during the Coalition’s past four years in government, it was incumbent independent Frankston MP Geoff Shaw who threatened to steal the show, when he turned up midway through his rival candidates’ debate to speak to Faine despite having failed to respond to several attempts by ABC producers to confirm his appearance on the show beforehand. Labor candidate for Frankston Paul Edbrooke and Liberal hopeful Sean Armistead faced a very public interrogation by the high-profile Melbourne ABC radio host in front of a street audience of Frankston residents, councillors, minor party candidates and political staffers. Before Mr Shaw’s arrival, Mr Ed-