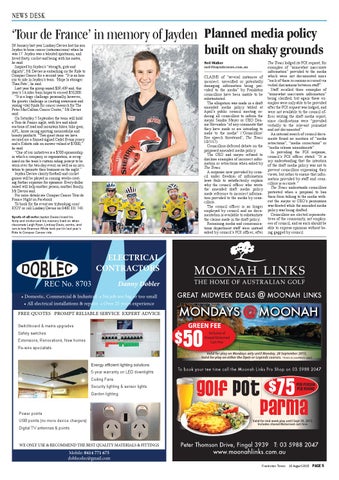 IN January last year Lindsay Davies lost his son Jayden to bone cancer (osteosarcoma) when he was 17. Jayden was a talented sportsman, and loved footy, cricket and being with his mates, he said. Inspired by Jayden’s “strength, guts and dignity”, Mr Davies is embarking on the Ride to Conquer Cancer for a second year. “It is an honour to ride in Jayden’s team: ‘Hope Is stronger Than Fate’, he said. Last year the group raised $39,439 and, this year’s 14-rider team hopes to exceed $50,000. “It is a huge challenge personally, however, the greater challenge is creating awareness and raising vital funds for cancer research for The Peter MacCallum Cancer Centre,” Mr Davies said. On Saturday 5 September the team will hold a Tour de France night, with live and silent auctions of road and mountain bikes, bike gear, AFL, horse racing sporting memorabilia and beauty products. “Two great items we have secured are a framed signed Cadel Evans jersey and a Kubota ride on mower valued at $7000,” he said. “One of our initiatives is a $500 sponsorship in which a company, or organisation, is recognised on the team’s custom riding jerseys to be worn over the two-day event, as well as an invitation to promote their business on the night.” Jayden Davies charity football and cricket games will be played in coming weeks creating further exposure for sponsors. Every dollar raised will help another person, another family, Mr Davies said. For more details see Conquer Cancer Tour de France Night on Facebook To book for the event see trybooking.com/ ICOY or call Lindsay Davies on 0400 331 743.

Neil Walker neil@baysidenews.com.au CLAIMS of “several instances of incorrect, unverified or potentially damaging information being provided to the media” by Frankston councillors have been unable to be substantiated. The allegation was made in a draft amended media policy tabled at April’s public council meeting ordering all councillors to inform the mayor Sandra Mayer or CEO Dennis Hovenden “of any comments that they have made or are intending to make to the media” (‘Councillors’ free speech threatened’, The Times 18/5/15). Councillors deferred debate on the proposed amended media policy. The CEO and mayor refused to disclose examples of incorrect information or retractions when asked by The Times. A response now provided by council under freedom of information laws fails to satisfactorily explain why the council officer who wrote the amended draft media policy made reference to incorrect information provided to the media by councillors. The council officer is no longer employed by council and no documentation is available to substantiate the claims made in the draft policy. Remaining media and communications department staff were instead asked by council’s FOI officer, after

The Times lodged its FOI request, for examples of “somewhat inaccurate information” provided to the media which were not documented since “each of these occasions occurred via verbal discussions between staff”. Staff recalled three examples of “somewhat inaccurate information” being clarified, but again these examples were only able to be provided after the FOI request was lodged, and were not available to the council officer writing the draft media report, since clarifications were “provided verbally to the relevant journalist and not documented”. An internal search of council documents found no mention of “media retractions”, “media corrections” or “media release amendments”. In providing the FOI response, council’s FOI officer stated: “It is my understanding that the intention of the draft media policy was not to prevent councillors expressing their views, but rather to ensure that information provided by staff and councillors is accurate.” The Times understands councillors protested when a proposal to ban them from talking to the media without the mayor or CEO’s permission was floated while the amended media policy was being drafted. Councillors are elected representatives of the community, not employees of council, and as such should be able to express opinions without being gagged by council.

WE ONLY USE &amp; RECOMMEND THE BEST QUALITY MATERIALS &amp; FITTINGS