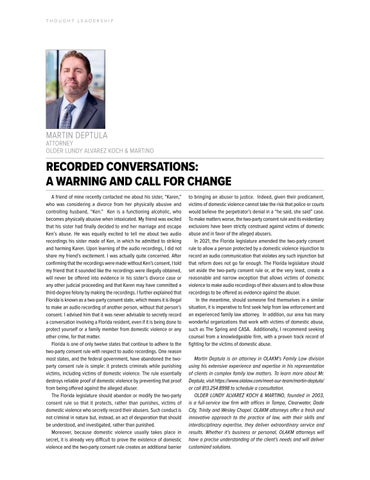 RECORDED CONVERSATIONS: A WARNING AND CALL FOR CHANGE A friend of mine recently contacted me about his sister, “Karen,” who was considering a divorce from her physically abusive and controlling husband, “Ken.” Ken is a functioning alcoholic, who becomes physically abusive when intoxicated. My friend was excited that his sister had finally decided to end her marriage and escape Ken’s abuse. He was equally excited to tell me about two audio recordings his sister made of Ken, in which he admitted to striking and harming Karen. Upon learning of the audio recordings, I did not share my friend’s excitement. I was actually quite concerned. After confirming that the recordings were made without Ken’s consent, I told my friend that it sounded like the recordings were illegally obtained, will never be offered into evidence in his sister’s divorce case or any other judicial proceeding and that Karen may have committed a third-degree felony by making the recordings. I further explained that Florida is known as a two-party consent state, which means it is illegal to make an audio recording of another person, without that person’s consent. I advised him that it was never advisable to secretly record a conversation involving a Florida resident, even if it is being done to protect yourself or a family member from domestic violence or any other crime, for that matter. Florida is one of only twelve states that continue to adhere to the two-party consent rule with respect to audio recordings. One reason most states, and the federal government, have abandoned the twoparty consent rule is simple: it protects criminals while punishing victims, including victims of domestic violence. The rule essentially destroys reliable proof of domestic violence by preventing that proof from being offered against the alleged abuser. The Florida legislature should abandon or modify the two-party consent rule so that it protects, rather than punishes, victims of domestic violence who secretly record their abusers. Such conduct is not criminal in nature but, instead, an act of desperation that should be understood, and investigated, rather than punished. Moreover, because domestic violence usually takes place in secret, it is already very difficult to prove the existence of domestic violence and the two-party consent rule creates an additional barrier MAY 2022

to bringing an abuser to justice. Indeed, given their predicament, victims of domestic violence cannot take the risk that police or courts would believe the perpetrator’s denial in a “he said, she said” case. To make matters worse, the two-party consent rule and its evidentiary exclusions have been strictly construed against victims of domestic abuse and in favor of the alleged abusers. In 2021, the Florida legislature amended the two-party consent rule to allow a person protected by a domestic violence injunction to record an audio communication that violates any such injunction but that reform does not go far enough. The Florida legislature should set aside the two-party consent rule or, at the very least, create a reasonable and narrow exception that allows victims of domestic violence to make audio recordings of their abusers and to allow those recordings to be offered as evidence against the abuser. In the meantime, should someone find themselves in a similar situation, it is imperative to first seek help from law enforcement and an experienced family law attorney. In addition, our area has many wonderful organizations that work with victims of domestic abuse, such as The Spring and CASA. Additionally, I recommend seeking counsel from a knowledgeable firm, with a proven track record of fighting for the victims of domestic abuse. Martin Deptula is an attorney in OLAKM’s Family Law division using his extensive experience and expertise in his representation of clients in complex family law matters. To learn more about Mr. Deptula, visit https://www.olalaw.com/meet-our-team/martin-deptula/ or call 813.254.8998 to schedule a consultation. OLDER LUNDY ALVAREZ KOCH &amp; MARTINO, founded in 2003, is a full-service law firm with offices in Tampa, Clearwater, Dade City, Trinity and Wesley Chapel. OLAKM attorneys offer a fresh and innovative approach to the practice of law, with their skills and interdisciplinary expertise, they deliver extraordinary service and results. Whether it’s business or personal, OLAKM attorneys will have a precise understanding of the client’s needs and will deliver customized solutions. 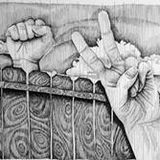 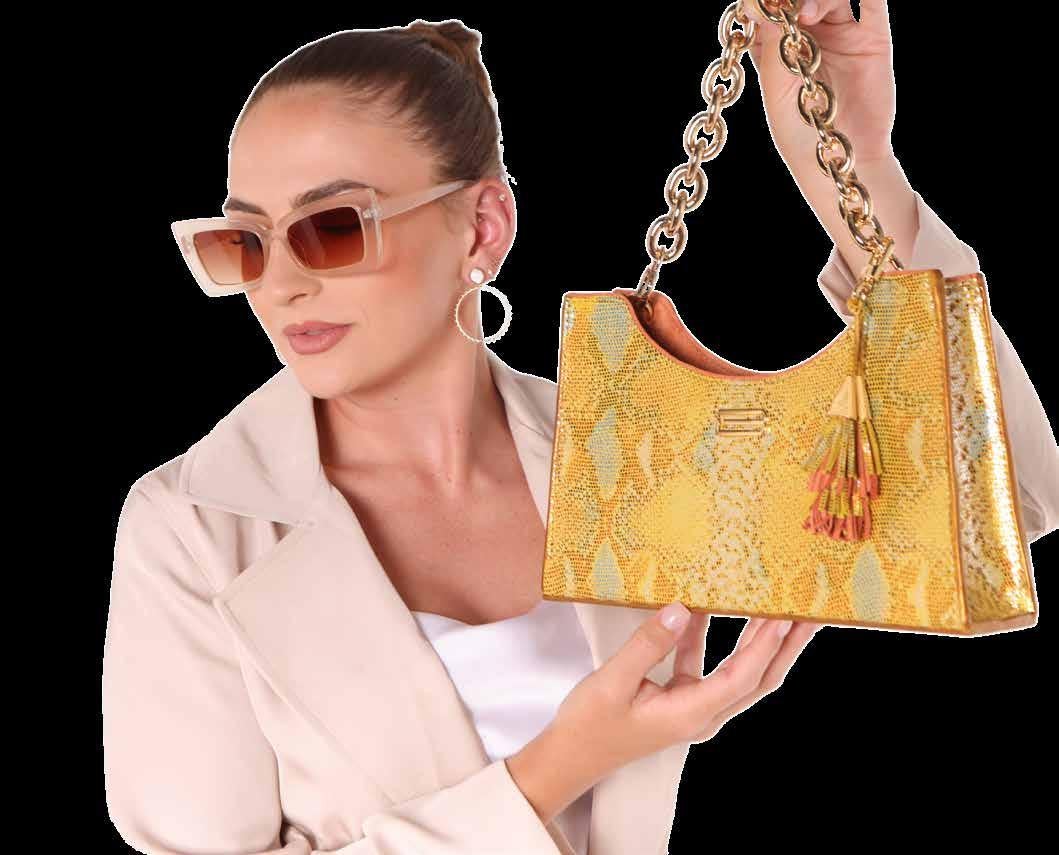 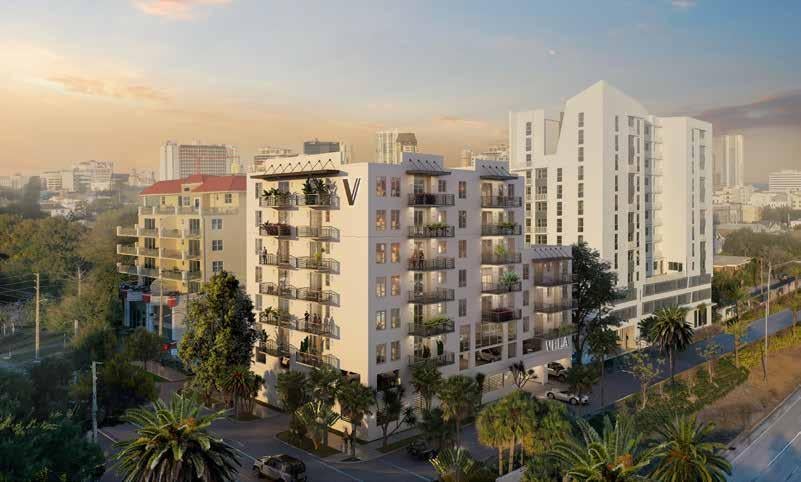 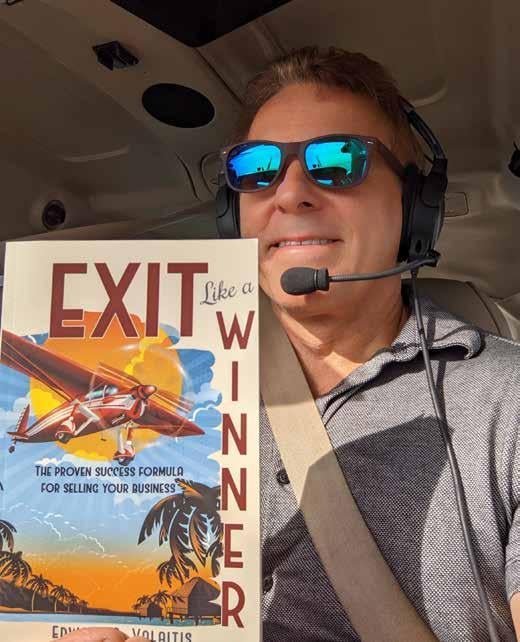 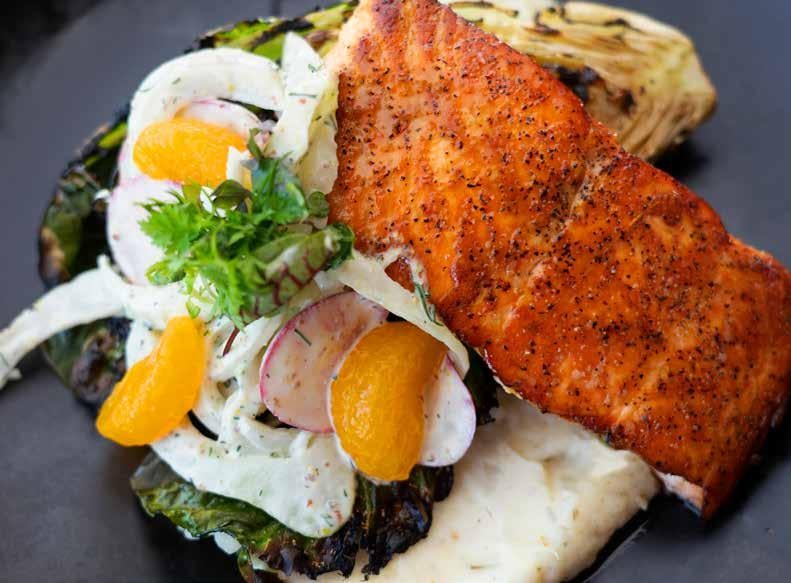