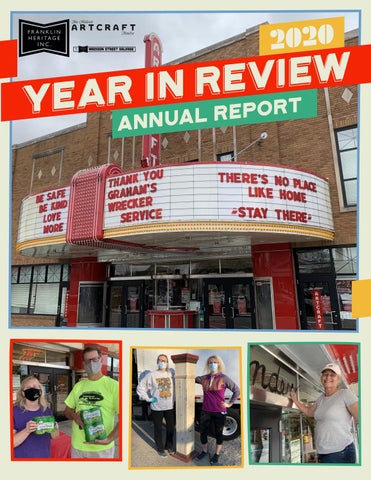 There aren’t many things that The Historic Artcraft Theatre hasn’t faced since its opening on Nov. 1, 1922. We’ve weathered through a depression. The second world war and other global upheavals. We gone through social and political changes. There have been three owners prior to Franklin Heritage, Inc. purchasing the Artcraft in 2004. But, believe it or not, a pandemic was new to our organization. We weren’t sure what to expect. As a matter of fact, we’re still NOT sure what is ahead. One thing we are sure of is that you will be there to support us. You’ve proven time and time again that preservation matters. That an authentic film-going experience matters. You know what Franklin Heritage, Inc., The Historic Artcraft Theatre, and Madison Street Salvage means to our community and beyond. Your generosity through donations, drive-up concession purchases, membership drives, and encouraging words all add to our motivation to remain a beacon of positivity. We can’t thank you enough. “Just keep swimming” and we’ll see you in person as soon as possible in 2021.

Plans for 2020 were to put focus back into one of our own properties – 48 East Madison St., “The Hotel” as we refer to it. Once a hotel (right) much like The Willard was, we were able to acquire this property in 2013 and have been renovating it. The building houses staff offices, files, meeting rooms, and archives. Plans for renovated bathrooms, exterior work, and signage were put on hold in March. We quickly Not quarantining yet as this picture was had to turn our focus to keeping FHI, The taken in January 2020. FHI board member Martin Bielawski and Director of Preservation, Artcraft, and Madison Street Salvage alive. Danny Causey, remove unused plumbing from We haven’t abandoned these renovation the Franklin Heritage, Inc., office building. plans and look forward to getting back on track to complete these tasks.

The year Franklin Heritage, Inc. was founded to preserve the historic character of Franklin.

A line extends down Main Street to see the 2020 Academy Award winner for Best Picture, “Parasite,” during the Heartland Film “Best of the Fest.” We were just 10 days from our first shutdown when this picture was taken.

Wow. What a year. Starting off 2020 with a fantastic run of films, and a record-breaking sponsorship party, it seemed like the sky was the limit. Well, nature had other plans in mind. We shut down, lost part of the marquee to storms, and did our best to navigate the new world we lived in. We held curbside concession sales, gift card and a membership drives, and a fundraising ask like never before. We opened to reduced capacity for as long as we could. Then another shut down, private watch party successes, and more concession runs for your at-home movie nights. You showed up for concession runs. You sent in donations. You shared messages of support – and we listened to every one

Repairs are made in July to the marquee following an April storm that damaged the panels.

of them. It’s because of you we’re still here, ready for the next chapter. There are still challenges, of course. There’s still upkeep and a mortgage to pay for, plus employees to take care of. We’ll have movies again soon – we have faith. The sun is rising, a new day awaits and we’re thrilled to have you along for what is ahead!

Despite being closed for a total of five months due to COVID-19 shutdowns, The Historic Artcraft Theatre was able to show 51 films!

Decrease in income compared to 2019

Sales of architectural salvage and antiques

Decrease in fair value of assets

Potential Theatre The Artcraft economy to the local ically during a typ l year. operationa

8,607 hours with Franklin Heritage, Inc. and The Historic Artcraft Theatre Financial equivalent to:

Membership Your membership dollars are allocated to the general fund. This allows us to apply it toward any necessary use.

Total Franklin Heritage, Inc. members at its peak in 2020

Growth in ticket sales for The Historic Artcraft Theatre

Sammy Terry made an appearance in October as part of “Halloweentown” festivities.

The Elba L. and Gene Portteus Branigin Foundation awarded The Historic Artcraft Theatre a $10,000 grant to establish a 35mm film library. Please let us know if you would like to contribute to this fund.

Madison Street Salvage celebrated its fifth full year at the 350 E. Madison St. location in 2020. With the help of a $10,000 grant from the Johnson County Community Foundation, in January, we were able to purchase a box truck with a hydraulic lift gate. This has been a priceless addition to the store’s ability to pick up and deliver architectural salvage and antiques. This no-doubt helped to maintain our presence during the two-month shutdown we experienced during the first wave of COVID-19 quarantine in the Spring. This quarantine did lead to the creation of our on-line store that allowed the store to continue operating in a virtual setting while waiting for doors to reopen in May.

In March, Kelsie Mitchell, Linda Bielawski, and Marty Williams picked up a full load of new merchandise for the store using the newly purchased box truck.

We were privileged to have a year filled with many on-line orders. With the continued effort of our volunteers, we were fortunate to end the year nearly matching the previous year’s sales numbers. We were also able to promote Kelsie Mitchell to full-time shop manager through these successes.

Stop by the shop at 350 E. Madison Street, Franklin Monday to Friday 10 a.m. - 5 p.m., Sunday 1-5 p.m. Approximate number of items available in the online store that launched in May. Visit at fhisalvage.org

Thank you for the many donations we’ve received so far!

Girls Inc., puts their “Gift Card / Give Back” cards to use for a field trip. The gift card program asked people to purchase gift cards for the theatre that would then be given to one of four selected non-profits in the community.

What’s next? Preserve more buildings • Continue working with other organizations in the community to preserve historic buildings.

Return to the theatre

Continue paying down our mortgages

• The Historic Artcraft Theatre and Madison Street Salvage have remaining mortgage balances that need to be paid down.

With love for our friend Raymond Turner

Artist and preservationist, Raymond Turner’s work is visible and will live on in the bean sprout murals in our lobby. He is missed dearly.