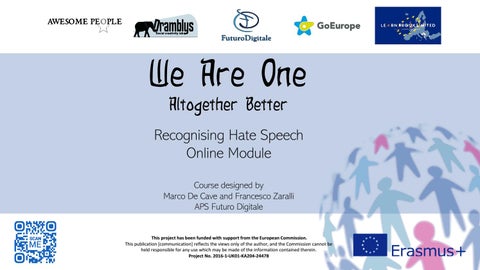 We Are One Altogether Better

The term â&#x20AC;&#x153;hate speechâ&#x20AC;? shall be understood as covering all forms of expression which spread, incite, promote or justify racial hatred, xenophobia, antisemitism or other forms of hatred based on intolerance, including: intolerance expressed by aggressive nationalism and ethnocentrism, discrimination and hostility against minorities, migrants and people of immigrant origin.

[Council of Europe, Committee of Ministers, Recommendation No. (97) 20].

The main problem in hate speech discussion is about the clash of two main concepts, freedom and limit of expression. About hate speech there is often a yes or no discussion, but to properly analyse such a concept, it is better to use a human-right perspective. In fact, that means that hate speech is first of all a problem of dignity of people.

Human rights guarantee at international level a shared (almost universally) standard based on the dignity of individuals that must be respected by the states. HR do not provide a life of luxury or total absence of harm or hurt. They provide a baseline that is necessary to recognise the life and the aspirations of each of the humans. In this way, it is possible to talk about hate speech when there is a damage occurred to someone.

The great importance of social and internet technologies have changed the life of everyone, as well as the forms of hate speech. Thatâ&#x20AC;&#x2122;s why is possible to talk about hate speech online.

Hate speech does not count only words or verbal expression, but also videos, pictures, cartoons together with all the hybrid forms of communication existing. The â&#x20AC;&#x2DC;multimediaâ&#x20AC;&#x2122; factor of hate speech has in fact a great impact on offline lives as well, like isolation, suicide, depression etc. Hate speech online is generally directed toward weaker groups of society, such as asylum seekers, minorities, refugees and others. Cyber-bullying is a particularly aggressive form of hate speech against individuals. It can lead to suicide or social depletion.

Hate speech comes from the deep conflicts of a society, like economic tensions or insecurity transferred by main-stream media. This means that acting against hate speech online leads to understand also offline hate. However, hate speech online derives also from the way users understand internet. People see internet as a place without rules where behaviours don’t have “real consequences”. Other three factors reinforce hate speech online. The first one is about knowledge. People think that internet is a free place, but it is not as the people’s real position in society determines the way they look for information or how they use them. Basically internet can amplify social differences.

The second factor is impunity. That means people feel that they will not have legal consequences. However, laws are changing and legal trials have been more common about hate speech. Third factor is the sense of anonymity. Internet experience is rather seen as a private experience where the pressure of observation by other people doesnâ&#x20AC;&#x2122;t exist, like when we are on a street. Contrarily, actions on internet can be traced and monitored. Hate speech online can be analysed and understood in different ways

As shown in previous lesson, the analysis of hate speech should be based on how much harm it performs. How to analyse a situation of hate speech and how to recognise it? In a generic hate speech situation, we can distinguish four main elements. 1. CONTENT 2. CONTEXT 3.THE POTENTIAL TARGET 4.THE SOURCE (hate speech from a famous person is much worse than a 16-year-old blogger followed by a few people)

With reference to content, we can distinguish from generic discriminating situations to focused physical violence or social segregation. Context covers social and historical aspects that are valid in a precise moment and not in another one. It describes the possible impact of the hate message and how it can be legally prosecuted. The target group factor makes us understand how a hate speech is more or less harmful. In a given society, some groups are more vulnerable than others. This highly depends on their image on the media, on their economic power, on their political influence, on their capabilities to access to basic needs, on the values of a society. In general, damage produced by hate speech should be the only parameter to analyse it.

[A verbal attack on Muslims is far more damaging in a non-Muslim country as they are the minority. A verbal attack to governing politicians is far less harmful in a democracy than in a dictatorship.] The source is fundamental to recognise how hate speech works. An unknown bloggerâ&#x20AC;&#x2122;s hate speech will be much less powerful than an influencerâ&#x20AC;&#x2122;s statement or a politician calling for discrimination. Hate speech is often justified as a tool of political debate, therefore giving again sense of impunity.

Hate speech is hard to defeat for three main reasons. There is still lack of common agreement on how to recognise a hate speech situation and how to legally counteract it. Second, internet is mostly owned by private companies. How should governments act to regulate it? Third, freedom of speech is also discussed and governments tend to interpret it in different ways. 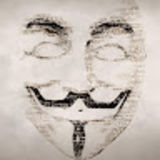