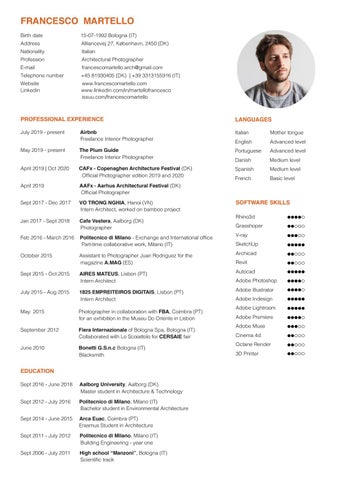 Assistant to Photographer Juan Rodriguez for the magazine A.MAG (ES)

Photographer in collaboration with FBA, Coimbra (PT) for an exhibition in the Museu Do Oriente in Lisbon

- Wood Self-costruction workshop “MEDS - Bucharest City of Contrasts“ by MEDS in Bucharest (ROU) in August 2016 - Athens Session November at Delft University of Technology, for the course “Earthquakes in Holland, opportunities for the integral trasformation of an entire region” in November 2015

- Workshop in Villaggio Ecologico (Ecovillage) in Granara (IT), on building construction in straw/cob in 2014 - Workshop “My first 3d print” with Organisation Lab+ Milano (IT) in 2014

- Advcanced photography course in DS Visuals School Milano (IT) in 2013

- Street Project in Lisbon (PT) with Poladarium, a brand of polaroid calendar Made in Germany

- Design contest “Atmospheres 2014” with Politecnico di Milano, ended with an exhibition in Biennale di Venezia in 2014

EXPERIENCE - Volunteer with Workaway for Danhostel, in Aarhus (DK) in March 2019.

- Volunteer with Workaway for a Ceramic Studio with firing ceramic technic from japanese kiln called ANAGAMA, in Tolne (DK) in January 2019.

- Volunteer experience in Cape Verde about 2 months from October 2018 for Simabo association, an NGO working for the rights and defence of stray dogs on Mindelo island (CV). 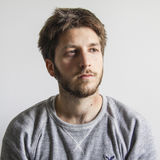