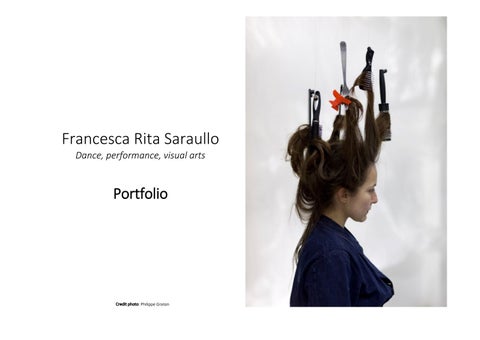 BIO | Francesca Saraullo, in art Francesca Rita Saraullo (Chieti, 1984) Choreographer, dancer-performer, video-maker and independent researcher. Saraullo is a multidisciplinary graduate in choreographic and visual arts at the Royal Academy of Fine Arts in Brussels (ISAC/AeSP), in multimedia and performing arts at MultiDams in Turin, in cinema and media engineering at the Polytechnic School of Turin. She trained, from a self-discipline perspective, in dance, theatre and singing, with Raffaella Giordano, Nina Dipla, Jose Cazeneuve, Peter Gemza, Dominique Duszynski, Hayo David, David Zambrano, LoÏc Touzé, Alexandre Del Perugia, Ivana Ferri, Bruno M. Ferraro, Marco Viecca and Claudio Girard. She has participated in specialisation courses with some of the most significant international masters, namely Odile Duboc, Dominique Dupuy, Meredith Monk, Sotiguy Kouyate, Marco Biagini. She took part in the training &quot;Transforme, Se prolonger&quot; directed by Myriam Gourfink (Fondation Royaumont) as a dancer working with Daniele Ninarello and Colline Etienne. She formed part of the creation work &quot;La Procession&quot; by Nacera Belaza at the &quot;College-Dance&quot; in Venice, and participated in the study and research project &quot;ATLAS - create your dance trails&quot; within ImPulsTanz - Vienna International Dance Festival. As performer, actress and dancer she collaborated with such choreographers as Isabella Soupart, Lynda Gaudreau, Nina Dipla, Frédérique Robert, Chrysanthi Badeka, and with directors Ivana Ferri, Silvia Battaglio, Marcel.lì Antunez Roca. Since 2013, she has been creating her own choreographic works (ANAMNESIS, LUX, Et toi..., La Sospesa) and visual works (W., RACCOLTO, Moulbaix Dr., Ballerina, MiNunn). She is co-founder of the cultural and artistic project &quot;Riabitare il Futuro&quot; (Rehabiting the Future) in Abruzzo (art&amp;rural). She is active as a performer in the Belgian collective BARUMBARA Collective (performing arts). She has presented her works at various dance performance and video festivals (Dagvandedans in Belgium, Dés-orienté(s) ISELP in Brussels, MAG FEST Italy, DANÇA INVISÍVEL in Portugal, International Dance Film Festival Brussels, DANSE EN FILM BORDEAUX, ATHENS VIDEO DANCE PROJECT) and has most recently performed in MUZEU’M L, M HKA, Contemporary Art Center Tignous of Montreuil. Since 2016 she has been conducting research training in Sensitive Dance® with Claude Coldy. In 2021, she is a research fellowship artist in Charleroi Danse (Choreography Center of the French Community of Belgium).

Artistic statement Brussels-based independent artist, she has been working across the boundaries of performing arts, dance and video since 2013. She combines personal projects (solos) with collaborations (duo or collective). Her artistic career is nourished by her academic, humanist and scientific education in the visual arts and her studies in dance, theatre and performance, from a self-discipline perspective. Turin, Paris and Brussels, to date, are her cities of reference for her evolution as an artist and human being.

ARTISTIC STATEMENT: practice &amp; research Notes The body and choreographic writing are at the centre of her research. Body as matter to be sculpted to bring out what is already, there, present, rooted in a time, perhaps, further away than the one in which we live. Body as &quot;place&quot; from which a gesture, an action, an intention, a dance can be born. Choreography understood as the possibility of composing in space and time moving bodies, whether they are dance, light, image or plastic bodies. In this perspective, she makes use of a broad definition of choreography which involves not only dance as an archetypal expression of choreographic art but also video, installation and performance. Focusing on the aesthetics of the ordinary, on memory and the imaginary, she moves her artistic practice to the limit between reality and fiction. The human universe and, in particular, the feminine universe is the engine from which her thoughts and creative act emerge. She prefers the evolutionary repetition of the gesture, simple and powerful actions, the achievement of a possible ecstasy in the dance, the vacant void, an animal and intuitive presence, the contrasts of register and dynamics, the performative stripping of the scene, simplicity in complexity. She practises a mode of composition based on long periods of improvisation, allowing a sequence of movements, a spatial and temporal architecture, and a scenario of intentions to emerge organically. The writing closes when the right structure appears with specific references to space, time, rhythm, quality, bite. All the scenic elements from light, set design, sound to the audience can be part of a choreographic composition. For each work and process, she imagines a flexible device that can be modular and adaptable.

LUX is a visual and dancing performance in-situ in interaction with light and sunlight. In dialogue with Mark IJzerman&#39;s robotic, interactive and solar PHOTOSPHERE installations, the choreographer and dancer Francesca Saraullo creates instantaneous compositions in resonance with the sun&#39;s reflections in space and space itself by manipulating, in addition, reflective discs. In turn, using computer technology and artificial intelligence, Mark creates choreographic patterns with light according to position and the sun&#39;s reflections in space, while maintaining a relationship with the audience and me as they walk around. LUX invites the audience to be witness to a contemplative and magical experience, wrapped in a soundscape between live-electronics and the natural sounds of the surrounding space. Teaser video: https://vimeo.com/356878242 (showing in MUZEU’M L museum, Roeselare, B) | https://vimeo.com/336223338 (showing in M HKA museum as adapted version for DoD2019, Antwerp, B). DATES 27.04.2019 M HKA museum, in the frame of Dag van de Dans 2019 (Antwerp, B). 14-15.06.2019 MUZEU’M L museum, in collaboration with DeSpil (Roeselare, B). PARTNERS M HKA in collaboration avec Dag van de Dans; MUZE’UM L in collaboration avec De Spil cc | B ; Temp Studio Lisbon (artisticresidency) | PT.

Et toi... is a flexible perfomance for theatrical as well as alternative space &gt;&gt; LINKS VIDEO

La Sospesa is the portrait of a woman suspended between the speed and the multiplicity of ideas that goes over her head, and the necessity to come back to her own animality. Like a floating jellyfish balancing on a wire, she moves forward in the cycle of life. Manipulated by what lies outside her, or she does it to herself. She engages in a play where roles are reversible, where she gradually frees herself from real and imaginary threads. A series of intimate landscapes interweave to evoke a personal and archaic memory made of images, sensations and feelings.

La Sospesa is a visual and sound performance where the dance composes itself with the performative act by establishing a specific relation with the body, the sound, the installation and the light.

La Sospesa is a choreographic and visual project from which others art works are born thanks to its modular and flexible nature (dancing performance, installation, and dance video). In this way La Sospesa, based by a symbolic and an opened concept, invites others artists and the audience as well to look for their own sense and narration.

ARTVIDEO DOCUMENTARY around La Sospesa 1 “Sur la pointe des cheveux“ (2017, B) https://vimeo.com/236429734 realised by Nasrine Kheltent (presented during the showing in BUDA arts center, final creative residency, Kortrijk, B) 2 “francesca“ (2014,IT) https://vimeo.com/241493123 realised by Stefano Scipioni (presented in the context of Video in Cantiere in ELECTA Créative Arts, Teramo, IT)

RACCOLTO consists of a series of performances as well as itinerant installations in unusual or historical places in different villages of Abruzzo, Italy. Gisela Fantacuzzi and Francesca Saraullo direct a group of artists who make up the arTeaLter collective with the intention of combining artistic experience (dance, theatre, visual and sound arts) with employment and the valorisation of a specific local heritage. Through a multidisciplinary approach, RACCOLTO is the result of a process of research and encounters. RACCOLTO was born in the framework of &quot;Ri-abitare il Futuro&quot; (Re-inhabiting the Future), a cultural and artistic innovation project that proposes a research aimed at promoting the reuse and valorisation of the Abruzzo region in its most &quot;hidden&quot; beauties. By collecting the seed of tradition to transform it in the present, the intention is to look for a new way of living in places that have been marginalised and abandoned in the process of economic development in recent decades. https://issuu.com/francescasaraullo/docs/rassegna_fotografica_raccolto-proge

Part of the choreographic project “Archaeology of gesture” W. portrays a pelvic choir of 13 women by revealing the voice of the sacred, of the animal, of the human, of being Womb Woman Warrior Wonder Wahine. &gt;&gt; LINK VIDEO

Supported by AEsP (Art in the Public Space) and ISAC (Institute of Superior Arts of Choreography), Fine Arts of Royal Academy of Brussels

Distant echoes of the marching band suspended between the ruminations of pensive cows… How does the sensory experience of a place inspire new topographies in our bodies of a village? Two explorers embark on a journey to discover the village of Moulbaix. &gt;&gt; LINK VIDEO

https://vimeo.com/97511497 PRESENTATION 2017 DanceFilmFestival Brussels, section “X-tra”, Brussels / B. 2014 “Territoire sans cible” group exhibition by the students of Art in Public Space from the Royal Academy of Fine Arts of Brussels, in collaboration with the Ath Cultural Center / B.

Supported by AEsP (Art in the Public Space) and ISAC (Institute of Superior Arts of Choreography), Fine Arts of Royal Academy of Brussels

A woman falls over to the right and to the left with her broom. She is there, she is present. She dances.

Ballerina is a video dance, which presents the portrait of a woman. The project was born by the idea to discover a dancing gesture as well as a choreography in to the ordinary and in the day life. &gt;&gt; LINK VIDEO

An old couple dance with spontaneity, presence and consciousness. The work wants to show as a dance could appear in the imperceptible magic of daily life. &gt;&gt; LINK VIDEO 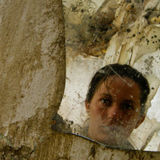