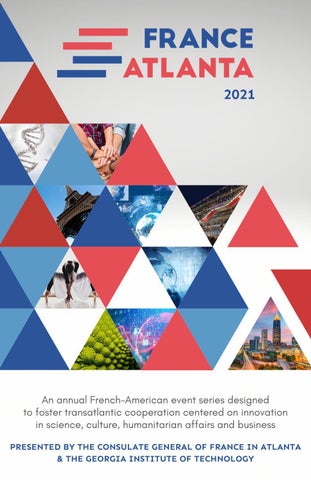 PRESENTED BY THE CONSULATE GENERAL OF FRANCE IN ATLANTA &amp; THE GEORGIA INSTITUTE OF TECHNOLOGY

Georgia Institute of Technology are pleased to present the 2021 edition of France-Atlanta.

Since 2010, our annual event series has fostered FrenchAmerican

collaboration in our interconnected world.

The 12th edition of France-Atlanta is presented under the high auspices of the Ambassador of France to the United States, His Excellency Mr. Philippe Etienne; the Governor of Georgia, the Honorable Brian P. Kemp; and the Mayor of Atlanta, the Honorable Keisha Lance Bottoms, with the support of French and French-American associations in Atlanta and numerous local and international partners.

We hope you enjoy this year’s events.

Consul General of France in Atlanta

Chain Management in the COVID-19 Era and Beyond

NEW FRENCH CINEMA: BEYOND BORDERS French Women Filmmakers &amp; Global Perspectives This event presents three movies from the 2021 Young French Cinema program as well as a virtual roundtable discussion with the filmmakers. All three films were created by women writer-directors and feature characters from outside of France. À coeur battant (“The End of Love” by Keren Ben Rafael) is set in France and Israel; Sous le ciel d’Alice (“The Skies of Lebanon” by Chloé Mazlo) takes place in Beirut; and Si le vent tombe (“Should the Wind Drop” by Nora Martirosyan) follows a French inspector in Nagorno-Karabakh. The roundtable discussion will focus on storytelling, gender and French culture beyond France’s borders.

This event is organized by the University of Georgia’s Film Studies Program and Willson Center for Humanities and Arts, UniFrance and Athens Ciné, with the support of the Atlanta Office of the Cultural Services of the Embassy of France in the United States and the Alliance Française of Atlanta.

MATERIAL REUSE A Conversation with Bellastock, Rotor and Rural Studio Rethinking the building material cycle is an urgent ecological necessity. The work of Bellastock (Paris 2006), Rotor (Brussels 2006) and Rural Studio (Newbern, Alabama 1993) provides a fascinating window into the myriad challenges – logistical, economic, formal, social – to reusing building materials and components. The specific contexts and circumstances of their origins and their continuing evolution offer lessons and inspiration to all of us: students, building industry professionals, activists and concerned citizens.

This event is organized by the Atlanta Office of the Cultural Services of the Embassy of France in the United State and Georgia Tech with the support of Bellastock, Rotor and Rural Studio.

CASUAL CREATORS How New Tools are Changing Artistic Practices Professional musicians use tools to be creative, but there are even more amateurs who enjoy being creative, albeit in casual ways. During this event, we will explore whether digital and other systems can be designed to help these casual users tap into their creative sides. In addition, we will discuss the design of creativity-augmentation systems that rely on computational creativity.

This event is organized by IRCAM (Institut de Recherche et Coordination Acoustique/Musique) with the support of the Atlanta Office of the Cultural Services of the Embassy of France in the United States.

A DANCE, REUNITED ELEVATE is thrilled to collaborate with France-Atlanta and Atlanta Contemporary to present &quot;A Dance, Reunited.” A film screening will be followed by a panel discussion with artists and community leaders about the resurgence of the global arts community during the COVID-19 pandemic. Co-produced by HAU Hebbel am Ufer, the film Letters from the Continent was conceived and shot in May and June 2020 and features 21 artists from Cape Town, Dakar, Lagos, Maputo, Moroni, Tunis and other cities. Filmed during the COVID-19 pandemic, it reflects on how, for many people, there has always been some sort of crisis – a health, political or, above all, economic crisis – and how the handling of such a crisis can make people everyday heroes. The film Letters from the Continent is part of the 2021 Dance Films Catalogue conceived by the Cultural Services of the Embassy of France in the United States.

This event is organized by the Atlanta Office of the Cultural Services of the Embassy of France in the United States with the support of the Mayor&#39;s Office of Cultural Affairs of the City of Atlanta, ELEVATE and Atlanta Contemporary.

PROTEINS OF THE FUTURE In a context of ecological and climate crisis, population growth makes even more pressing the need to produce new food sources that are less resource intensive, such as alternative proteins. During this seminar, French and American researchers and entrepreneurs from the agri-food sector will present advances in research on plant and synthetic proteins, their environmental impact, as well as associated ethical and regulatory issues. This event is organized by the Atlanta Office for Science and Technology of the Embassy of France, in partnership with the French-American Chamber of Commerce of Atlanta.

Artificial intelligence (AI) models are now capable of collecting and analyzing enormous datasets in ways that are challenging fundamental values embraced within Europe and the United States. Holding much promise in terms of increased productivity, efficiency and quality time, AI programs and algorithms could function as an assistant, a peer, a manager or even as a friend. Indeed, they might be so revolutionary that no one, regardless of whether they are consumers, citizens, patients, operators or stakeholders, will remain unaffected. The power of AI is such that it may jeopardize what it means to be human and whether people retain freedom of choice. AI might reshape the relationship between humans and technology in society. The ethical issues emerging from AI are complex and quickly evolving. What follows is that identifying and implementing appropriate solutions can be difficult. The approaches taken by France, the European Union and the United States to address these ethical issues are currently being defined and the governments are, in 2021, still considering options to maximize the potential of AI and big data while mitigating potential ethical issues. This event is organized by Georgia Tech, the Consulate General of France in Atlanta, the Emory University Center for Ethics, the University of Nantes Law and Social Change Research Center and DataSanté Research Program, with the support of the Atlanta Office of the Cultural Services of the Embassy of France in the United States and the Atlanta Office for Science and Technology of the Embassy of France in the United States.

FINTECH TRENDS IN THE SOUTHEAST Changing the World of Finance The FinTech industry is one of Georgia&#39;s most important and fastest-growing sectors. Metro Atlanta’s FinTech sector, which now rivals that of London, New York and Zurich, is home to global giants like NCR, Worldpay, Equifax and Global Payments, as well as Atlanta’s industry disruptors like Kabbage, BitPay, Paymetric, GreenSky, ControlScan, GroundFloor and Cardlytics. Join us for a discussion with industry experts from both sides of the Atlantic to learn more about FinTech trends in the Southeast and innovative collaboration with France.

This event is organized by the French-American Chamber of Commerce of Atlanta, the Atlanta Office for Science and Technology of the Embassy of France in the United States and La French Tech Atlanta.

TRANSATLANTIC TECH SUCCESS Synergies between Atlanta’s entrepreneurial ecosystem and France’s tech scene are developing at an unprecedented rate, especially following the accreditation of French Tech Atlanta in April 2021. A new generation of transatlantic ventures is expected to flourish in the coming years. This summit will bring together outstanding entrepreneurs, tech leaders, government officials, academics and other stakeholders from both France and the U.S. Southeast. Discussions will center on channels of collaboration and the key components of success that transatlantic innovators seeking to conquer the U.S. market should consider before starting their entrepreneurial journey in Atlanta.

This event is organized by the Atlanta Office for Science and Technology of the Embassy of France in the United States, the French Foreign Trade Advisors for the U.S. Southeast, the French-American Chamber of Commerce of Atlanta and La French Tech Atlanta.

CRYSTAL PEACH AWARDS GALA Since 2005, the Crystal Peach Awards have recognized the most significant inbound and outbound investments between France and the Southeastern United States. This year’s event will include an Economic Development Award for achievements in both France and the Southeast, an Innovation Award, a Corporate Social Responsibility Award and a Start-up Award. Members of the French-American Chamber of Commerce of Atlanta will have the privilege of choosing the winner of each category in the weeks preceding the event. The Gala, which will be the official closing ceremony of the 2021 edition of France-Atlanta, will be attended by over 120 guests, including top-ranked executives of small and large French and American companies as well as journalists and members of the international business community.

The Crystal Peach Awards Gala is the signature business event of the FrenchAmerican Chamber of Commerce of Atlanta.

PUBLIC HEALTH LOGISTICS AND SUPPLY CHAIN MANAGEMENT IN THE COVID-19 ERA AND BEYOND Speed, Efficiency and Equity in the Allocation of Limited Critical Resources The ongoing pandemic is demonstrating the importance of supply chains and logistics in the distribution of healthcare resources. The lack of resilience and agility of these systems has contributed to limited and unbalanced availability of critical resources, leading to the shortage and wastage of resources in different parts of the world. The 2021 Humanitarian Forum will focus on such disparities as well as policies and operational solutions to reduce them.

This event is co-organized by the Consulate General of France in Atlanta, the Center for Humanitarian Emergencies and the Office for Global Strategy and Initiatives at Emory University, and the School of Industrial and Systems Engineering and the Center for Health and Humanitarian Systems at Georgia Tech.

BECOME A FRANCE-ATLANTA SPONSOR Since 2010, France-Atlanta has breathed new life into the FrenchAmerican relationship in the U.S. Southeast, bringing together over 3,000 participants every year.

As a 501(c)(3) nonprofit organization, France-Atlanta relies on the generous support of sponsors to continue to showcase the best of transatlantic cooperation between France and the Southeast in the realms of science, culture, business and humanitarian affairs.

Why support France-Atlanta... Because

visionaries and other contributors from France and the United States. Because you believe that global exchange is the key to the future. Because

between France and the Southeastern United States. Because

To learn more about France-Atlanta sponsorship opportunities, please contact us at presse@consulfrance-atlanta.org

France-Atlanta 2021 is made possible by:

The 12th edition of France-Atlanta, which takes place from October 7 - November 5, 2021, presents nearly a dozen events centered on French-American innovation in business, science, culture & humanitarian affairs. Discover this year's events in the brochure.