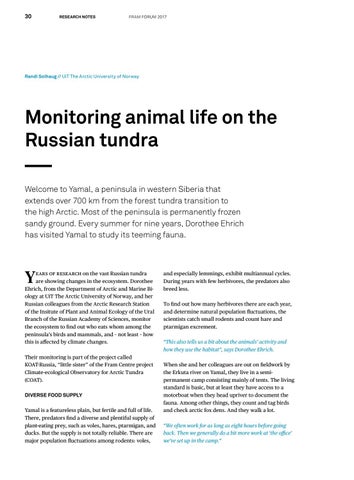 Monitoring animal life on the Russian tundra Welcome to Yamal, a peninsula in western Siberia that extends over 700 km from the forest tundra transition to the high Arctic. Most of the peninsula is permanently frozen sandy ground. Every summer for nine years, Dorothee Ehrich has visited Yamal to study its teeming fauna.

ears of research on the vast Russian tundra are showing changes in the ecosystem. Dorothee Ehrich, from the Department of Arctic and Marine Biology at UiT The Arctic University of Norway, and her Russian colleagues from the Arctic Research Station of the Insitute of Plant and Animal Ecology of the Ural Branch of the Russian Academy of Sciences, monitor the ecosystem to find out who eats whom among the peninsula’s birds and mammals, and – not least – how this is affected by climate changes. Their monitoring is part of the project called KOAT-Russia, “little sister” of the Fram Centre project Climate-ecological Observatory for Arctic Tundra (COAT). DIVERSE FOOD SUPPLY Yamal is a featureless plain, but fertile and full of life. There, predators find a diverse and plentiful supply of plant-eating prey, such as voles, hares, ptarmigan, and ducks. But the supply is not totally reliable. There are major population fluctuations among rodents: voles,

and especially lemmings, exhibit multiannual cycles. During years with few herbivores, the predators also breed less. To find out how many herbivores there are each year, and determine natural population fluctuations, the scientists catch small rodents and count hare and ptarmigan excrement. “This also tells us a bit about the animals’ activity and how they use the habitat”, says Dorothee Ehrich. When she and her colleagues are out on fieldwork by the Erkuta river on Yamal, they live in a semipermanent camp consisting mainly of tents. The living standard is basic, but at least they have access to a motorboat when they head upriver to document the fauna. Among other things, they count and tag birds and check arctic fox dens. And they walk a lot. “We often work for as long as eight hours before going back. Then we generally do a bit more work at ‘the office’ we’ve set up in the camp.” 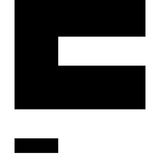 Arctic knowhow from FRAM - High North Research Centre for Climate and the Environment (The Fram Centre). Read more about: The green Arctic....

Arctic knowhow from FRAM - High North Research Centre for Climate and the Environment (The Fram Centre). Read more about: The green Arctic....